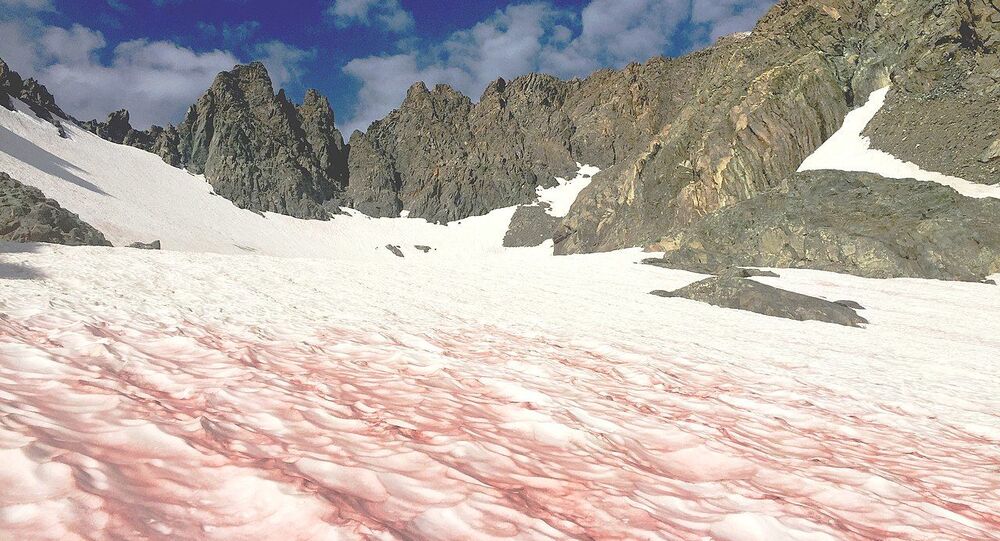 While throughout winter and spring the French Alps are shrouded in pristine white snow, the arrival of summer is increasingly prompting the slopes to take on a rosy hue that has been dubbed by some as “watermelon snow" or "glacier blood."

The ALPALGA project – a collaboration of French laboratories – has been looking into what causes snow covering the slopes of the French Alps to take on an orange or red hue with the advent of summer, in a puzzling marvel known as “glacier blood.”

Scientists believe that rising levels of carbon dioxide may be fueling blooms of red, snow-borne microalgae in the Alps, a phenomenon known as "glacier blood." https://t.co/oWR1RCItsg pic.twitter.com/1su03hQuc0

​It's thought blooms of red microalgae in the Alps are behind the “blushing” snow – concerns are growing as surveys show that alpine habitats all over the world have experienced a dramatic surge in snow algae blooms.

The science behind these aggregations of the normally invisible creatures, known for their photosynthetic proficiency, is not very well understood.

Amid increasing reports of the “glacier blood” phenomenon, researchers at several alpine institutes decided to study algae species “that grow next door,” explained the leader of the project, Eric Maréchal, the head of a plant physiology lab at Grenoble Alpes University.

Researchers have monitored the algae in the French Alps to figure out what species live there and what causes them to "bleed," with initial findings published in Frontiers in Plant Science.

While tiny algae produce a large amount of the world’s oxygen, they can on occasion multiply so quickly that they “go overboard,” disrupting the natural balance of things to trigger anything from “red tides” to “glacier blood.”

There is a glacier called "Blood Falls" in Antarctica that regularly pours out red liquid, making it look like the ice is bleeding. (It's actually oxidised salty water.) pic.twitter.com/HCnPiTkleV

Adeline Stewart, who worked on the study as a doctoral student, pointed out that algae are “the basis of all ecosystems.”

The red, green, grey, or yellow hues of the blooming organisms come from pigments and other molecules that the snow algae use to protect themselves from ultraviolet light. As these shades absorb more sunlight they trigger a swifter melting of snow. This, on a broader level, can hasten the shrinking of glaciers, claim scientists.

As the scientists investigated what potentially triggered the algae to bloom, they determined that human-generated factors can impact the phenomenon and increase frequency. Previous research determined that anything ranging from extreme weather conditions to agricultural and sewage runoff may affect both freshwater and ocean algae blooms – so the researchers sought to find out if this applied to snow algae.

The project members subjected the organisms to surpluses of nutrients, such as nitrogen and phosphorus, but to date have not found anything significant, said Dr. Stewart. Still, the research revealed the “incredible diversity” of alpine algae, which can be dubbed “beacons of ecosystem change.”

Researchers intend to monitor how various species of the organisms are distributed in diverse habits, and how this may shed light on the overall health of the ecosystem.

Furthermore, the scientists will try to establish whether temperature changes affect the bloom patterns, eventually hoping to decipher the origins of the blood-red snow phenomenon.

“There’s so little that we know… We need to dig deeper,” said Adeline Stewart.

‘Discovery Whole World Will Talk About’: Remains of Neanderthals Mauled by Hyenas Found in Italy