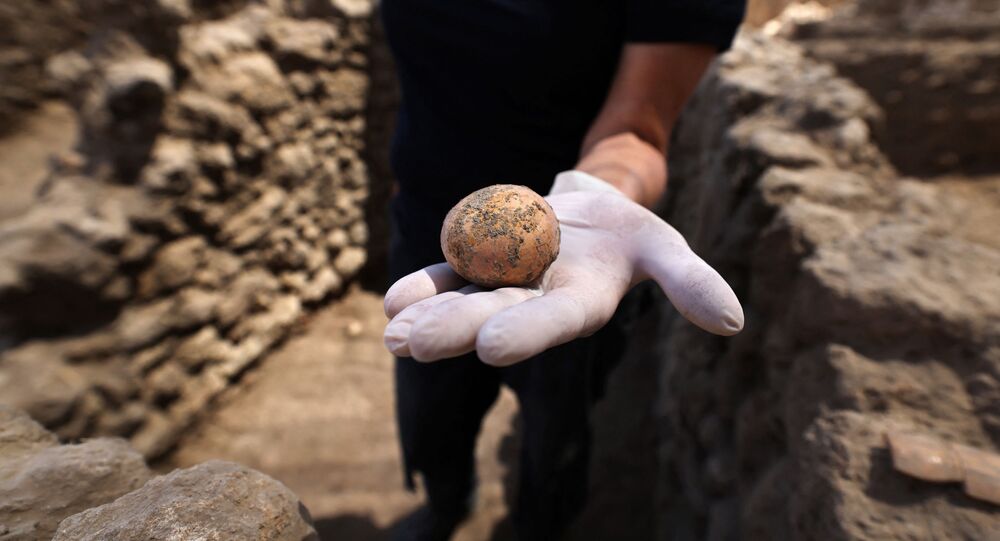 The egg was preserved largely due to the nature of where it was discovered, wrapped in a layer of human feces that created rare anaerobic conditions, according to the archaeologists, which, in fact, helped in creating the perfect conditions to preserve its thin shell.

Israeli archeologists uncovered a perfectly intact chicken egg dating from about 1021 CE in Yavne, a city in central Israel, but as they tried to clean it up and maintain its perfect condition, the shell unfortunately cracked.

According to a statement released on Wednesday, the archeologic gem was discovered in a cesspit by scientists from the Israel Antiquities Authority while excavating Yavne as part of an urban development project in the city.

"Eggshell fragments are known from earlier periods, for example in the City of David and at Caesarea and Apollonia, but due to the eggs’ fragile shells, hardly any whole chicken eggs have been preserved. Even at the global level, this is an extremely rare find," she said. “In archaeological digs, we occasionally find ancient ostrich eggs, whose thicker shells preserve them intact."

However, the egg's shell shattered while it was being taken from the excavation site despite considerable attempts by archaeologists and a conservationist to keep it in good condition. Luckily, it was restored in the Israel Antiquities Authority's organics laboratory.

“There’s not much left. There was barely some yolk left inside, but it’s more or less empty. We’re going to take the remains and extract some collagen to try to do DNA sequences" Gal said. "Do not worry, the egg was returned to a complete condition after treatment in the organic laboratory."

"Even today, eggs rarely survive for long in supermarket cartons. It’s amazing to think this is a 1,000-year-old find,” Israel Antiquities Authority archaeologist Alla Nagorsky, the excavation director at the site of the discovery, is also quoted in the statement as saying.

According to the researchers, chickens have existed in Israel for almost 2,300 years, dating back to the Hellenistic and Early Roman periods. And the presence of chickens has been ever-growing, following the VII century AD rise of Islam in the region, with a ban on consuming pork, as evidenced by the decrease in pig bones found at several locations in the region.

“Families needed a ready protein substitute that does not require cooling and preservation, and they found it in eggs and chicken meat,” Perry Gal said.

Apart from the medieval egg, three bone dolls used as toys during the Islamic period, approximately 1,000 years ago, were also discovered in the cesspit.

Bigger Hips in Women May Be Due to Human Ancestors Laying Eggs, Study Claims