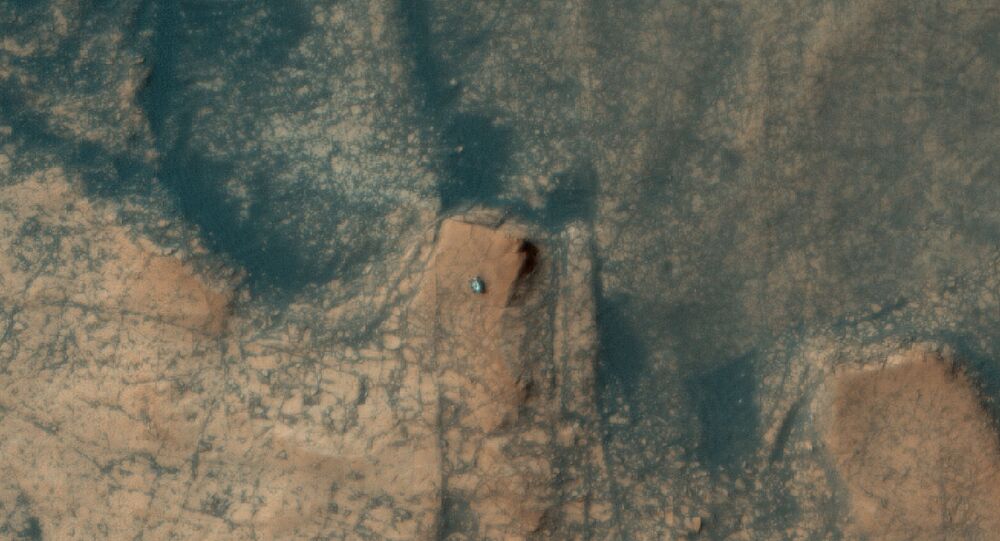 Currently the Red Planet hosts a number of exploring devices sent from Earth, including the latest, NASA's Perseverance rover, InSight lander and Curiosity rover. The most recent landed on Mars to perform a wide array of experiments, including the search for traces of organic life.

NASA's Curiosity rover was spotted last month climbing Mont Mercou on Mars, in a shot taken by the US space agency's Mars Reconnaissance Orbiter (MRO), according to a press release from the University of Arizona, that exploits the camera on MRO.

Mont Mercou is a wide rock outcropping on the northern slope of five-kilometer-high Mount Sharp, located near the 96-mile-wide (154 km) Gale Crater.

The photo was taken by the MRO High Resolution Imaging Science Experiment (HiRISE) tool, that is capable of detecting small objects on the planet's surface. The device at that moment was at a height of 167.5 miles (269.4 kilometers) above Curiosity, a vehicle the size of an ordinary automobile.

“The rover previously drilled into the rocks at the base of the cliff. Scientists are interested in comparing the rocks from the bottom to the top to investigate how any changes may relate to the appearance of the rocks exposed on the cliff face,” the release says.

The Curiosity rover landed on Mars in August 2012, in the area of the Gale Crater. Its mission is to determine whether there was microbial life on the planet's surface or atmosphere. Since 2014, the rover has continued to climb Mount Sharp, traveling some 25 kilometers on Mars. Curiosity and has been functional for more than 3000 local days (sol).

Curiosity Rover spotted on the surface of Mars by the orbiting MRO spacecraft.

The rover was reported to have some problems with wheels that wore out significantly after a year of exploring Gale Crater. The rover has provided numerous video recordings of the surface of Mars, among other scientific experiments.