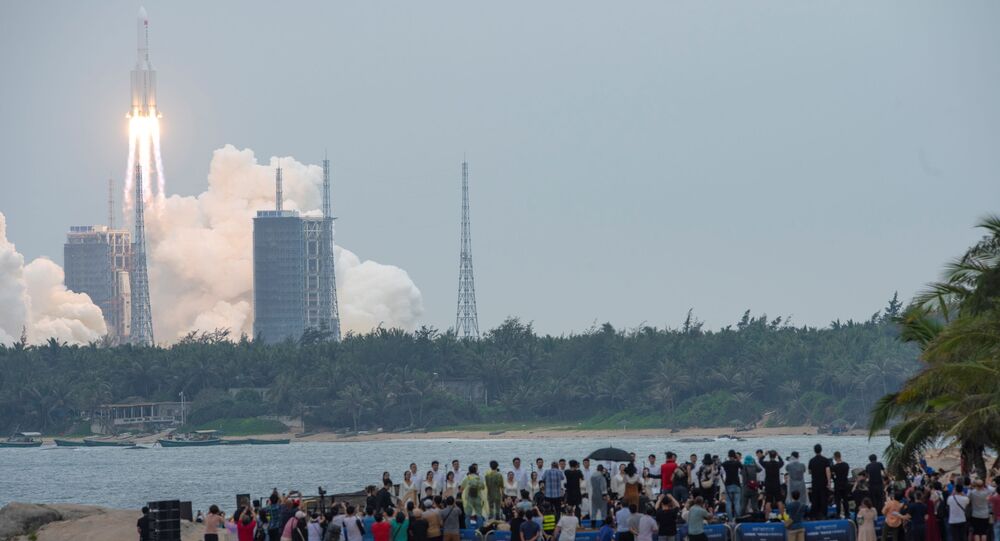 The rapidly tumbling 19-tonne object may enter our planet’s atmosphere on or around 9 May, with more calculations of its possible crash zone only possible after the reentry actually begins.

Russian space agency Roscosmos continues to keep tabs on the second stage of the Chinese CZ-5B, as the object appears poised for an uncontrolled reentry.

According to calculations that the space agency recently shared on social media, the object is steadily losing orbital altitude, and could enter Earth’s atmosphere as soon as 9 May somewhere over the Pacific Ocean.

Earlier, Roscosmos chief Dmitry Rogozin tweeted a map of our planet highlighting the general area where the rocket’s remains could crash, although, as the 19-tonne launch stage is rapidly tumbling, more accurate predictions can only be made after it begins its descent through the atmosphere.

The object is steadily losing orbit altitude: during another day of the observation, its apogee decreased by another 18 km to 267 km, and the perigee — by 3 km to 156 km.

As of May 7, the object can enter the Earth's atmosphere on May 9 over the Pacific Ocean. pic.twitter.com/ByH18975lL

​The heavy Chang Zheng 5B launch rocket was used to deliver a section of the upcoming Chinese orbital station Tiangong (“Heavenly Palace”) into near-Earth orbit.