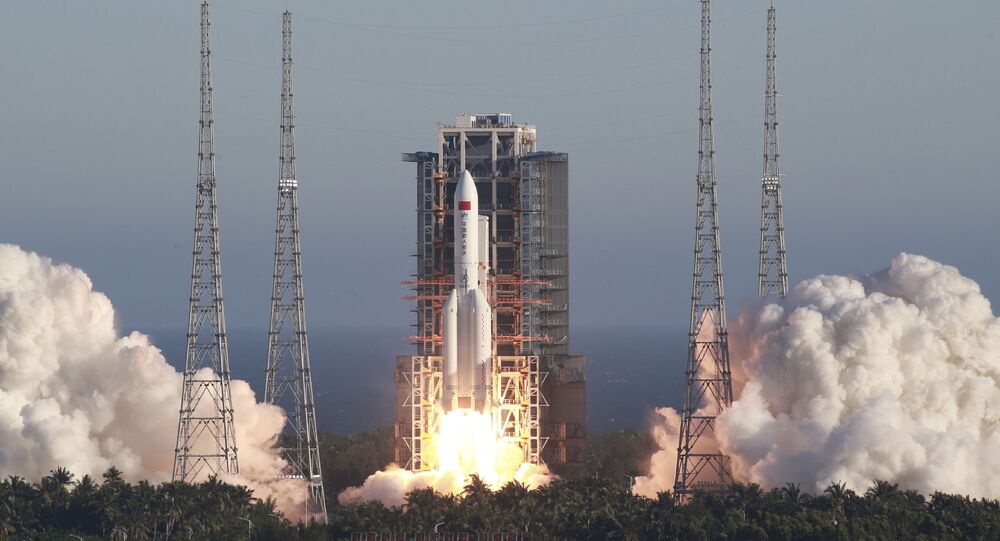 China launched the Long March 5B carrier rocket with the main module (Tianhe, or "Harmony of the Heavens") for its future orbital station at the end of April.

Most debris of the Chang Zheng 5 rocket will burn upon entering the atmosphere; the risk for planes or objects on Earth is very low, Chinese foreign ministry spokesman Wang Wenbin said.

“On 29 April, the Chang Zheng-5B launch vehicle successfully launched the base module of the orbital station into orbit. The Chinese side is closely monitoring the situation with the rocket stage entering the Earth's atmosphere. According to my information, the launch vehicle is designed from a special material, most of its debris will burn up upon entering the atmosphere, the threat to air navigation and objects on the ground is extremely low," Wang Wenbin said at a briefing.

According to the US military, the rocket stage will enter the atmosphere on 9 May over Turkmenistan at the coordinates of 38.1 degrees north latitude and 62.5 degrees east longitude.

Earlier, the US Air Force predicted a steep drop over the South Pacific near New Zealand. Roskosmos reported that the stage, weighing 18 tonnes, would not fall on the territory of Russia.

On 29 April China launched the Long March 5B carrier rocket with the Tianhe module from the Wenchang launch site on Hainan Island.

Tianhe will be the control hub for the Tiangong (or "Heavenly Palace") orbital station.

China expects to finish assembling its first space station in lower Earth orbit by 2022. The country has planned several missions, both cargo ship and crewed ones, across 2021 and 2022 to complete the complex and plans to officially launch the space station in 2023.