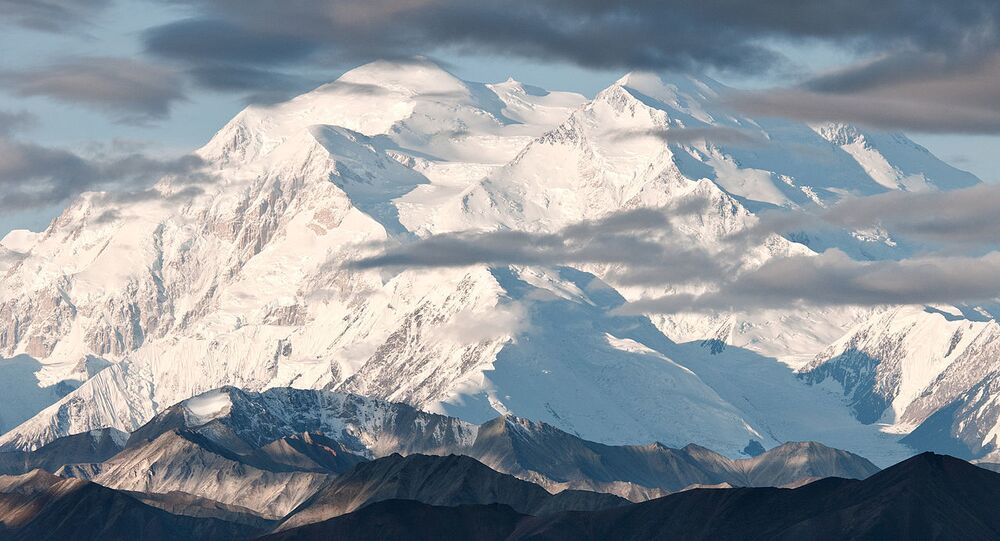 An Alaskan Glacier is 'On the Run', Posting Surging Ice Speeds Up to 100 Times Faster Than Normal

39-mile-long Muldrow Glacier, perched on the side of Alaska’s highest peak, Denali - previously known as Mt. McKinley – was last seen on the move in 1956-57, at which time it advanced over 4 miles.

A glacier in Denali National Park is experiencing what experts refer to as a surging event, as it is moving between 50 to 100 times faster than normal.

What a picture. The Muldrow Glacier is surging for the first time in 64 years. Means it can move anywhere between 10-100x faster than normal which is causing all the crevasses to form. Luckily the normal climbing period for Denali doesn't start until late next month. pic.twitter.com/kASxL2Pvqz

​As he was flying on the north side of Denali, he noticed some unusual topography around the Muldrow Glacier, perched atop the tallest mountain in North America, formerly known as Mt. McKinley, with a summit elevation of 20,310 feet (6,190 m) above sea level and located in south-central Alaska.

Muldrow Glacier, #Alaska in @DenaliNPS time lapse. Looks like the glacier actually started to gain some momentum back in July of 2020, and dramatically accelerated in December. Sentinel-1 #satellite via @sentinel_hub pic.twitter.com/mileW7pNs6

​After taking photos of the uneven, crevassed landscape, he sent them to a geologist friend.

Crevasses could prove fatal to climbers attempting to ascend the summit of Denali.

“I was looking at the glacier and I was thinking it looks really difficult to get onto the glacier right now. It’s all shattered and torn up and jagged ice and deep crevasses everywhere,” Palm was quoted by the Anchorage Daily News as saying.

Acting on the pilot’s tip, the National Park Service confirmed that the glacier is experiencing a glacial surge event, moving around 30 to 60 feet per day.

Outward evidence of the slumping ice is manifest in large and pervasive crevasses forming throughout most of the glacier.

Due to the rapid flow of the surge, the crevasses reflect increased deformation within the glacier.

The longest glacier in Denali National Park is in the midst of a surge event. These occur about every 50 years. It's moving at 10-20 meters per day! Already it's surged over a kilometer. https://t.co/0hnf98Dv4e pic.twitter.com/6dLwzOHswd

​Glacial surges are “really strange events… They are these things that have fascinated glaciologists for decades,” Jonny Kingslake, an assistant professor of environmental science at Columbia University, was cited as saying by Gizmodo.

Previously, Muldrow Glacier surged in the 1950's, when it moved four miles in the span of a few months.

There is nothing surprising about the surge, as most of the world’s glaciers are constantly on the move, flowing at rates of millimeters per day and retreating and advancing with the seasons.

However, a rare percent of the glaciers, in specific geographic areas like Alaska and parts of Tibet, experience cyclical periods when their movement speeds up faster than normal, followed by a period of rest.

It is these movements that are referred to as glacial surges.

‘Out of Balance’ Glaciers

The jury is still out as to what exactly drives the surges. As ice builds up near the tops of mountain glaciers, where temperatures are colder, any ice that melts flows downslope, to become trapped near the bottom of the glacier. Overtime, the glacier gets ‘out of balance’, with the ice rushing forward.

“So over time, the glacier grows in the upper areas and it diminishes in the lower areas,” said Martin Truffer, a glaciologist at the University of Alaska.

Recent research also suggests that meltwater could serve as a lubricant to help free ice, creating glacial surges in some areas.

A “surge of the century” was witnessed in 2012 when the Austfonna ice cap, Europe’s largest ice field, gushed water during an autumn surge event.

Climate change is believed to also be affecting glacial behavior.

Mountain glaciers all over the globe are said to be shrinking, according to a study published in January in the journal The Cryosphere. According to the research, mountain glaciers worldwide have lost at least 6 trillion tons of ice since the 1990s.