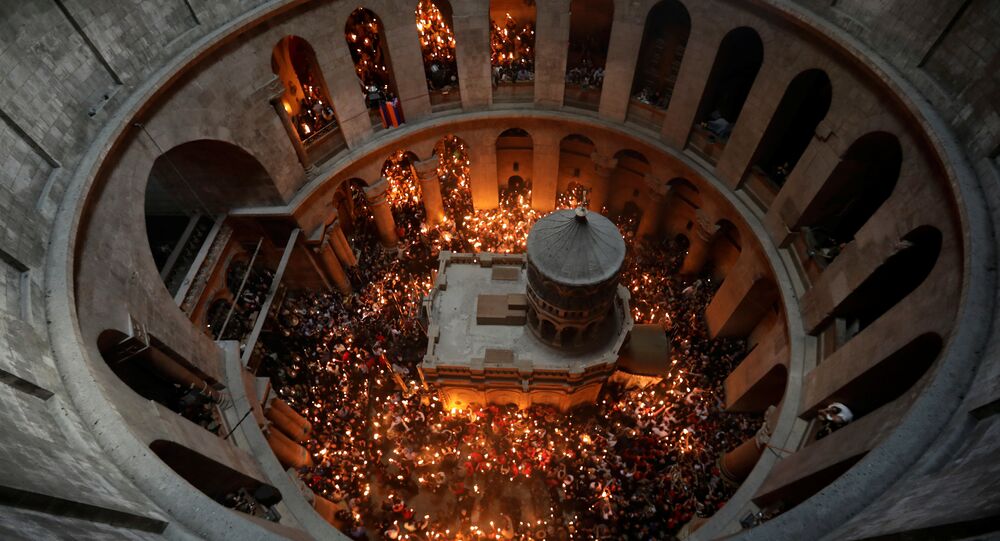 It was previously thought the enigmatic engravings at the Church of the Holy Sepulchre were made by pilgrims visiting the holy site, yet the manner was stunningly unified, as if belonging to one or just a few handcraft masters.

Archaeologists from the Israel Antiquities Authority say they have solved a historic riddle of the Church of the Holy Sepulchre, which was erected on the place where Jesus is believed to have been crucified.

Its walls are known to feature strings of engraved crosses, which have piqued the curiosity of a great many scientists, as they have been unable to decipher who made them ages ago.

One of the theories goes that pilgrims could have etched them into the stone, conveying the message that “I came – I saw” as a statement of some accomplished action.

“This unique phenomenon always baffled us”, Amit Re’em, head of the IAA’s Jerusalem District, told Reuters. “Is it graffiti of the pilgrims, or rather, something else?”

In the course of the renovation at the sacred Christian site, archaeologists managed to finally examine the carvings up close, using 3D imaging and digital technologies to compare the engravings and date them.

They discovered that the thousands of religious symbols had all been made by only a few people, thereby arriving at a new hypothesis – about the work of art being something less random and more structured.

“We saw that all of [the crosses] have the same depth and even the marking of the mason”, he said.

“Maybe two or three hand artists made these crosses”, Re’em said. “So it’s not graffiti, it’s something more organised”.

Re’em went on to suggest that it was common practice for pilgrims to assign masons the task of making the carvings, which explains the manner and style being more or less unified.