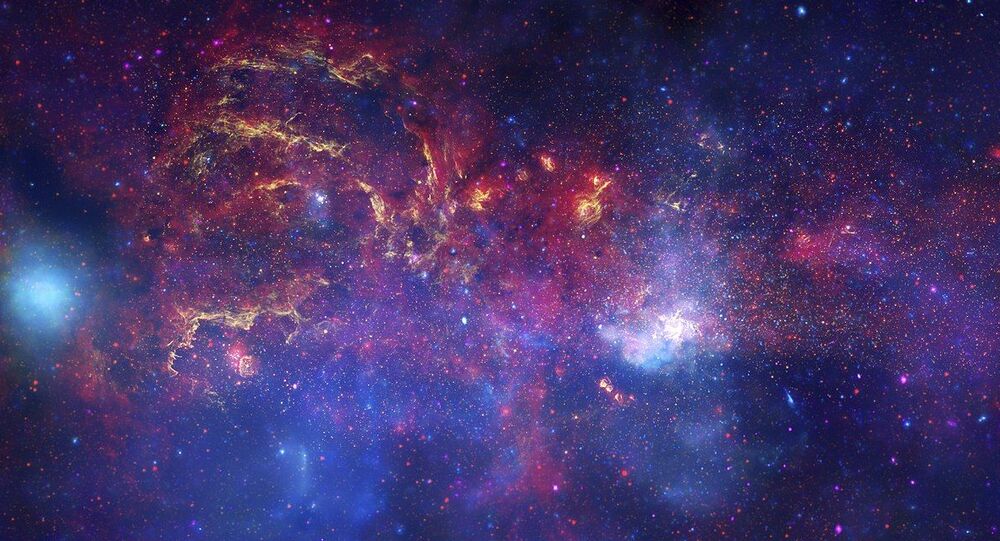 Invisible dark matter, known to exist due to its gravitational pull on regular matter, has evaded scientists’ attempts to find it. However, since 2009, intriguing gamma-ray light radiating from the Milky Way’s core detected by NASA's Fermi telescope has been illuminating potential clues.

Dark matter might be an explanation for the glow of mysterious excess gamma radiation that suffuses the centre of the Milky Way, according to new research.

Unexplainable despite the stars located there, along with a black hole 4 million times the mass of the Sun, the area, called the Galactic Center GeV Excess (GCE), has long puzzled astronomers.

Galactic Center GeV Excess (GCE) is the term for this unexpected and unexplained surplus of gamma-ray radiation in the center of the Milky Way galaxy. pic.twitter.com/S8VkEsjVTv

​It was originally discovered by physicists Lisa Goodenough and Dan Hooper in 2009. Data provided by NASA’s Fermi telescope had helped detect the excess gamma radiation, with the team unable to pinpoint what was causing it.

The Fermi Bubbles are two enormous orbs of gas and cosmic rays that tower over the Milky Way only discovered in 2010. They may be fueled by a strong outflow of matter from the center of the Milky Way.

Scientists: "The bubbles are here, they're big, and we don't understand them." pic.twitter.com/cuf0xSbrqj

​In the recent research, published in Physical Review D, physicist Mattia Di Mauro of the National Institute for Nuclear Physics in Italy suggests dark matter is the culprit behind the GCE.

Incidentally, this had been the explanation originally put forward by Goodenough and Hooper.

Mysterious dark matter is responsible for gravitational effects that cannot be explained by regular matter, such as stars, dust, gas, and galaxies. Approximately 80 percent of all matter in the Universe is the invisible mass referred to as dark matter.

Thus, galaxies rotate a great deal faster than they should if they were only being gravitationally influenced by the normal matter in them.

However, whatever is generating the additional gravity is beyond astronomers’ ability to be directly detected.

These “raindrops” represent gamma rays seen by our Fermi satellite during a flare from the galaxy 3C 279. 💧 The galaxy’s central supermassive black hole powers this high-energy activity. Each drop’s size and color represents the energy of its gamma ray. https://t.co/q37uXNgYor pic.twitter.com/rTzabxyQmg

​Goodenough and Hooper proposed that, if certain dark matter particles called WIMPS (weakly interacting massive particles) and their antiparticles were to collide, they would destroy one another in a shower of other particles, including gamma-ray photons.

However, this explanation had been dismissed by other physicists as “shaky”.

Another seemingly plausible theory came along in 2018. It proposed that old, dead stars – pulsars – could be the reason behind the excess gamma radiation.

Furthermore, studies found that distribution of the GCE was irregular, or “speckled”, which scientists suggested might be consistent with sources like stars.

Dark matter came to the fore yet again, after a different team of astronomers ruled that “clumpy” gamma radiation could be produced by it.

The new research by Di Mauro compares data from the Fermi telescope over the last 11 years against measurements of other astronomical anomalies.

The latter were recorded by the Pamela cosmic ray detector aboard the Resurs-DK No.1 satellite and the Alpha Magnetic Spectrometer experiment aboard the ISS.

​The study provided information about the spatial distribution of the GCE to rule out various explanations.

"If the excess was, for example, caused by the interaction between cosmic rays and atoms, we would expect to observe its greater spatial distribution at lower energies and its lower diffusion at higher energies due to the propagations of cosmic particles," said Di Mauro.

"My study, on the other hand, underlines how spatial distribution of the excess does not change as a function of energy," added the scientist, emphasizing that this has never been observed before, and could be explained by dark matter.

© CC0
3D map of the large-scale distribution of dark matter, reconstructed from measurements of weak gravitational lensing with the Hubble Space Telescope

"The analysis clearly shows that the excess of gamma rays is concentrated in the galactic center, exactly what we would expect to find in the heart of the Milky Way if dark matter is in fact a new kind of particle," he said.

The mystery remains, however, as science is yet to discover just what that particle is.

Di Mauro and his colleague Martin Wolfgang Winkler of Stockholm University in Sweden subsequently attempted to searching for a gamma-ray excess in nearby dwarf spheroidal galaxies.

As they detailed in their second preprint paper, available on arXiv, they failed to detect one. However, the null detection enabled constraints on the mass of the dark matter particle compatible with the GCE, said the team.

The conclusion is that while we cannot say that dark matter is causing the GCE, science cannot rule out that it isn't causing it, either.

The studies leave physicists in anticipation that further observations might feed into efforts to untangle the tenacious puzzle.