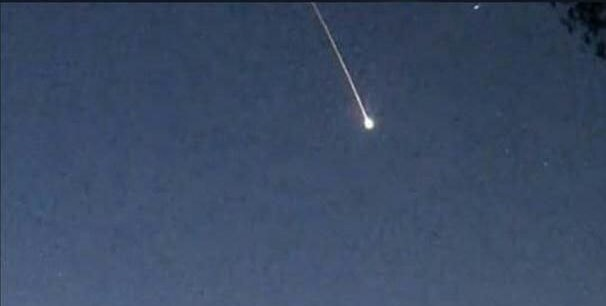 The Caribbean island was previously hit by a meteorite in February 2019, with space rock fragments causing a sonic boom powerful enough to shatter windows in the city of Pinar del Rio in country’s west.

Seismologists in Cuba have tentatively attributed mysterious lights illuminating the night sky above the Moa seismological station in the country’s east to a meteorite.

At 10:06 pm, the station registered ‘several luminous phenomena’, with residents in multiple communities reporting spotting a red and white light followed by one or more explosions.

National Seismological Service Chief Enrique Arango Arias confirmed to CubaDebate that the agency believes the event was caused by a space rock.

“Judging by the readings of the sensors, it was not a terrestrial explosion, but, since it was an event with such characteristics, our equipment recorded a shockwave,” the seismologist explained. He added that in addition to Moa, the event had been registered in the nearby towns of Sagua de Tanamo and Maisi.

A tweet by Elier Pila Farinas from the Institute of Meteorology of Cuba, explaining that the bright flash recorded by the GOES-East satellite over eastern Cuba was categorized as a lightning strike, despite lack of adverse weather activity in the area.

Hilario Quintana Charlot, an eyewitness in the nearby town of Jamaica, said he was outside when the suspected meteor came down, saying he saw a ball of light in the sky “which lit up everything, and then two or three minutes later, two explosions in a row”.

Another eyewitness, Luis Daniel Cano of Santiago de Cuba, said he spotted a fast-moving light across the sky, followed by a flash which he compared to a powerful bolt of lightning.

Local residents published images of the phenomena online, as well as footage of satellite equipment showing the flash of the possible meteorite. The amateur images have not been authenticated.

Cuba's size - just 110,000 square km, and the fact that it is surrounded on all sides by water, make meteorite strikes a relatively rare phenomenon on the island, with less than ten confirmed strikes reported in the past eighty-plus years. The most peculiar touchdown was a daytime strike in June 1994 of a rock weighing about 400 grams in the town of Lajas, central Cuba. The last confirmed meteorite strike hit the island on 1 February 2019.

Scientists estimate that the Earth is hit by about 6,100 meteors per year (i.e. about 17 per day). The vast majority are not detected, falling in uninhabited areas or oceans, and most are extremely small by the time they reach the ground. Meteorites have given astronomers important clues about life on other planets, the formation of the solar system, and even the origins of the universe.