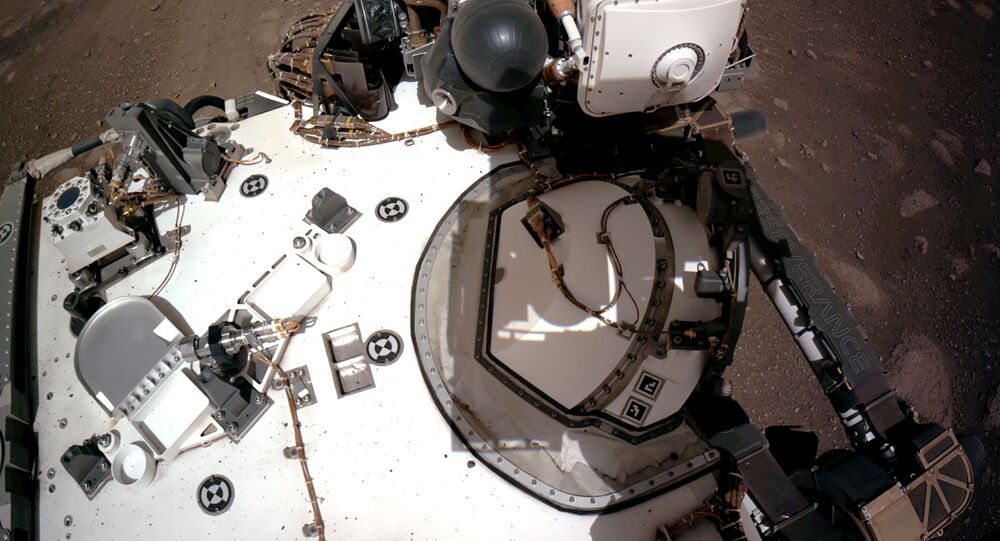 Engineers have endowed NASA's 2020 Perseverance rover with a set of top-notch mics to record anything from its descent and landing on Mars to the combing of the planet's rocky landscape. The first fruit of their work was not long in coming.

Perseverance, NASA's new rover to have recently touched down on Mars, has recorded stunning audio of itself crunching over the solid surface of the Red Planet, dotted by cliffs, jagged mountains, and dried-out riverbeds.

Its highly sensitive microphone has captured a wealth of diverse sounds coming from under the robot's six metal wheels – the slightest shrill or rattle they produce when moving across Mars' famously rocky terrain, thought to be at some point covered with water.

Two versions of the audio of the same drive were made public on 17 March: the first is over 16 minutes of raw sounds captured by the robot's entry, descent, and landing (EDL) microphone.

In it, the rover can be heard crawling in the Jezero Crater, with the noise originating from the interaction of Perseverance's mobility system, namely its wheels and suspension system, with the terrain.

Perseverance's team is currently determining the likely source of the scratching sounds – interference from the rover's electronics or interaction with the Martian surface.

The second compilation is an abridged set – a 90-second snippet from a longer recording of the drive, with some of the noises effectively cut out.

The agency specified at the time that the clip was made on 19 February 2021, just about 18 hours after landing on the mission's first sol, or Martian day, on 18 February.

The recording is quite muffled, and the agency moved to explain that "the rover's mast, holding the microphone, was still stowed on Perseverance's deck".

The SuperCam sounds were part of a series of systems checks the rover has gone through, which ranged from the debarking of the rover's robotic arm to conducting its first weather observations by means of the Mars Environmental Dynamics Analyser.

Separately, the rover has been combing the landscape for a suitable airfield for the Ingenuity Mars Helicopter to have a go at its first test flights.

© AFP 2021 / PATRICK T. FALLON
A full-scale model of the experimental Ingenuity Mars Helicopter, which will be carried under the Mars 2020 Perseverance rover, is displayed at NASA's Jet Propulsion Laboratory (JPL) on February 16, 2021 in Pasadena, California.

Now that the right spot has been found, the Perseverance and Ingenuity teams are full-on planning to deploy the helicopter, with 30 Martian days, or sols (31 Earth days) earmarked for it to complete up to five test flights.

Hunt for Ancient Life Way Ahead

And then the hunt for ancient microbial life – a key objective of Perseverance's mission - will begin for real, given the long swirling theory that water molecules could have once been on the Red Planet.

The rover's 19 cameras and a pair of advanced microphones are expected to make the experience, due to be beamed to Earth, astonishingly rich in sights and sounds alike.