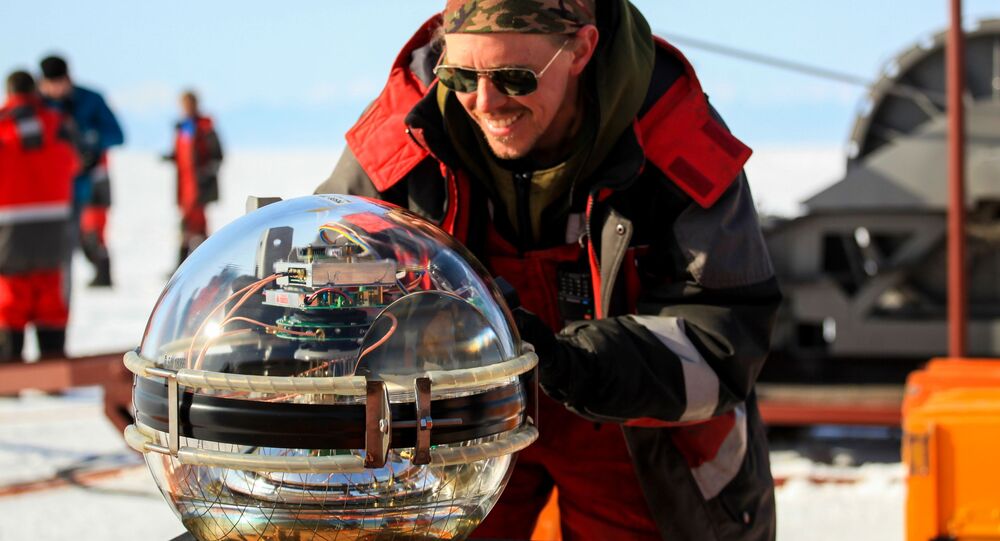 Construction of the science megaproject began in 2015, with the complex’s primary mission being the detection of neutrinos – the incredibly tiny, incredibly fast particles believed to contain secrets about the origins of the universe.

Scientists and officials launched Baikal-GVD, one of the world’s largest underwater space telescopes, in a ceremony in Siberia on Saturday.

The floating observatory, submerged to depths between 750-1,300 meters and situated about four km from the shore, will help scientists observe neutrinos, assist astronomers and astrophysicists in the exploration of the universe, and possibly even create entirely new subfields of science.

With no charge, a tiny mass, a rate of movement close to the speed of light, and an extremely low level of interaction with their surrounding environment, neutrinos are notoriously difficult to detect, with clean water deemed an ideal medium for doing so. Lake Baikal, the world’s largest freshwater lake, is an ideal natural reservoir to hunt for neutrinos, with its large volumes of available clean water increasing the space through which neutrinos can pass and be detected by scientific instruments.

The particles are thought to travel to Earth (and through all physical matter they encounter, including the ground and our bodies) from distant nascent or dying galaxies and various other exotic stellar phenomena. Scientists say the particles can tell us crucial information about what happened in the universe millions or even billions of years ago – possibly even at its origins, revealing the process and time frame for creation of chemical elements, the evolution of stars, the internal structure, and composition of the Sun and Earth, etc. 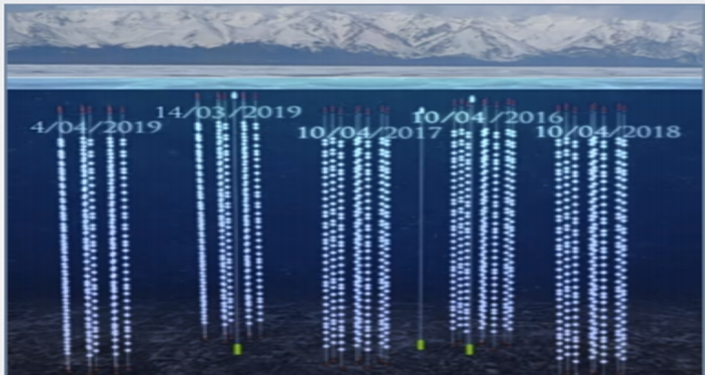 © Photo : Institute for Nuclear Research of the Russian Academy of Sciences
Artist's rendering shows Baikal-GVD clusters and the dates that they went into operation.

Baikal-GVD ("Gigaton Volume Detector") consists of a dozen clusters, each serving as an independent detector of high-energy neutrinos, with optical modules made of glass and stainless steel containing detection instruments attached by cables. The data they glean is transmitted to a master module via coaxial cables and, after being digitised and timestamped, is transferred to a master cluster connected to a shore research station by optical cables. The clusters’ work is precisely synchronised, allowing them to observe particle showers and combine data. They are fixed to the lakebed via heavy anchors and can be boosted to the necessary depths using buoys.

The new telescope was built in collaboration between several Russian research and educational institutions together with scientists from the Czech Republic, Slovakia, Poland and Germany. It is the largest underwater space telescope of its kind in the Northern Hemisphere, and comparable to the US IceCube project, which hunts for neutrinos at the South Poll. Russian scientists hope to match IceCube’s neutrino detection capabilities by later this year, and to surpass them after that. Baikal-GVD is said to boast superior angular resolution characteristics, and to be expandable (new additions will make it the world’s largest underwater space telescope by 2030 if other countries do not create ones which are larger).

Along with ANTARES and KM3NeT, two other neutrino detection projects situated in the Mediterranean, Baikal-GVD and IceCube are expected to help humanity in the search for neutrino radiation coming to Earth from throughout the cosmos.

© Sputnik / Кирилл Шипицин
Preparations for the lowering of a cluster of Baikal-GVD sensors.

Researchers in Siberia have been working on neutrino detection devices in Lake Baikal since the 1980s, with the success of experiments by the Soviet Academy of Sciences’ Institute for Nuclear Research leading to the approval of construction of the first telescopic array in 1990. The project was completed in the late 1990s, and upgraded in 2005. Construction of the Baikal-GVD was approved in 2015, with about 2.5 billion rubles ($34 million US) committed to the project. The original telescope is called the Baikal Deep Underwater Neutrino Telescope (BDNT), and has engaged in the collection of atmospheric neutrinos created by cosmic rays interacting with the atmosphere, rather than cosmic neutrinos. Data cleaned using the older system has allowed for the publication of numerous studies on phenomena including relic solar dark matter and high-energy muons (elementary particles similar to electrons but with a much greater mass).

Russian Scientists Figure Out How to Fight Salmonella With Probiotics