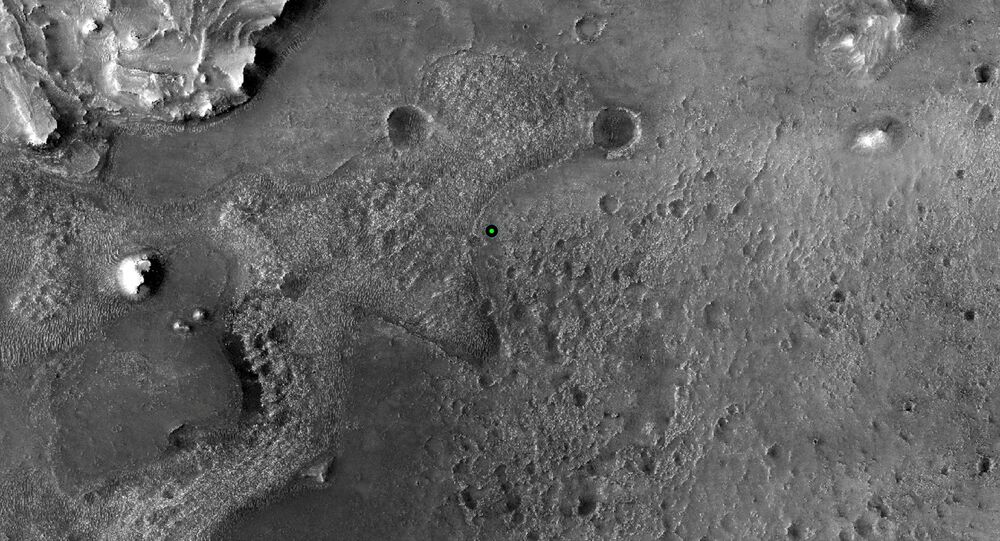 NASA's "Harbour Seal Rock" has made it possible for us to also become Mars guests, albeit virtual ones, as it took viewers from across the world on a breathtaking journey across the Red Planet's rocky land, notoriously swept by powerful dust storms.

While the robot Perseverance, intended by NASA to conduct a full-fledged study of the Martian surface, is not yet ready to fully dive into the mass of upcoming scientific work, it has already managed to stun researchers with its high-res zoomable panorama.

In particular, the image uncovered among countless rocks a dark towering stone that the team referred to as "Harbour Seal Rock", Mastcam-Z principal investigator Jim Bell, of Arizona State University's School of Earth and Space Exploration, said during a webcast discussion of the photo on 25 February.

The curiously-shaped rock perhaps came into being as a result of the sweeping Martian winds, which are potent enough to exquisitely carve just about any solid material, Bell suggested, proceeding to point to patches showcasing evidence of even faster erosion. The latter presumably occurred on spots where the thrusters on Perseverance's "sky crane" descent stage blew away Mars' red dust in mid-February, exposing the surfaces of small rocks dotting the Red Planet and raising many questions.

"Are these volcanic rocks? Are these carbonate rocks? Are these something else? Do they have coatings on them?", Bell queried. "We don't know — we don't have any chemical data or mineral data on them yet — but, boy, they're certainly interesting, and part of the story about what's going on here is going to be told when we get more detailed information on these rocks and some of the other materials in this area", the researcher stressed, as cited by Space.com.

Singling out interesting features that Perseverance can study in further detail with its spectrometers and other top-notch equipment is one of the key jobs assigned to Mastcam-Z and Perseverance's other cameras, Bell said. ​At a press conference, scientists from NASA's Jet Propulsion Laboratory described the cameras as a "nice to have" item not totally necessary for its umbrella mission of hunting for evidence of extinct microbial life in the Jezero Crater, but still something that proved to have "real scientific value".

Perseverance's scientific work will take quite a while to get going full steam because the mission team's first big task after getting the rover up and running is to conduct test flights of the 1.8-kilogram Mars Helicopter Ingenuity, which had also been specially carried by Perseverance from Earth.

© REUTERS / NASA/JPL-Caltech
The first high-resolution, color image to be sent back by the Hazard Cameras (Hazcams) on the underside of NASA's Perseverance Mars rover is seen after its landing on Mars February 18, 2021.

Once the rover shifts to surface-optimised software, which is expected to be conducted in four days, Perseverance will enable panoramas that are three times as sharp, thanks to lenses contributed to NASA's engineering cameras by the German company Jenoptik.

Following the safe landing of the Mars rover on 18 February, the world was happy to see the first images of the planet in such high resolution The National Aeronautics and Space Administation (NASA) was quick to release two images of Mars that confirmed the rover's successful entry, descent, and landing on the Red Planet's surface.