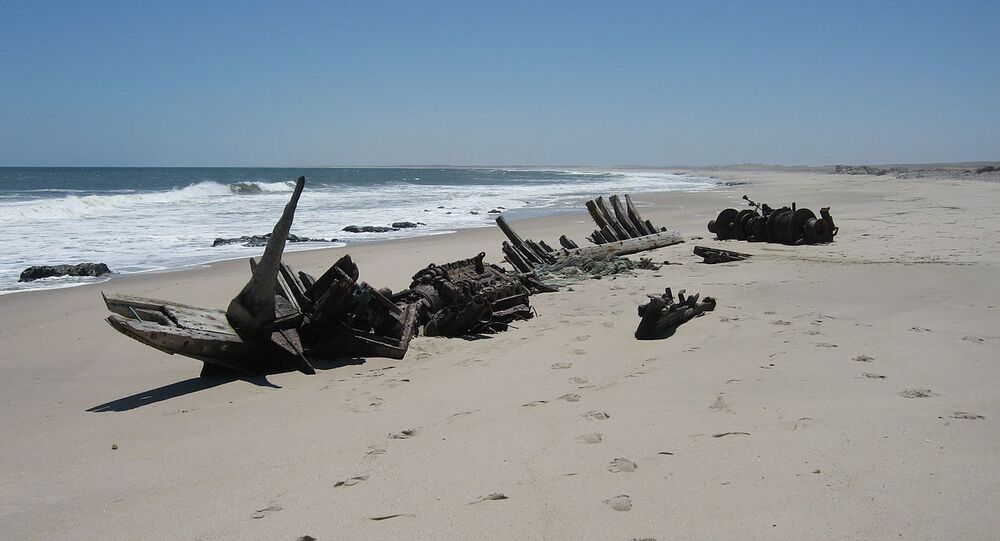 The area stretches from the northern part of the Atlantic coast of Namibia to southern Angola, although the name is sometimes used to describe the entire Namib Desert coastline. Looking at spectacular photos of the area, one would hardly guess that the place has brought so much misery to sailors.

Portuguese sailors called it "the Gates of Hell", while locals dubbed it "the Land God Made in Anger", but to the rest of the world it is known as "the Skeleton Coast", a resting place of hundreds of ships and who knows how many people. The coast originally got its name because of the bones of seals and whales that once covered its shore, however, later the name became associated with the debris of ships, which sank or ran aground in the area.

Even today one can stumble upon skeletons of animals.

The Skeleton Coast is famous for its highly inhospitable climate – dense ocean fog, heat, strong winds, and strong currents. Even if sailors managed to survive the shipwreck, they were doomed to roam in the never ending desert without food or water.

The coast is still littered with the debris of ships. Some of them were washed ashore at the beginning of the 20th century…

German cargo ship the Edouard Bolen was en route to Cape Town in 1907, but never made it to its final destination, as it sank near the Skeleton Coast. It once stood in water, but as years went by, the desert began to encroach into the ocean and now it rests in the sand.

The wreck of the Eduard Bohlen, a ship that ran aground on Namibia's Skeleton Coast in 1909, has—over the past century—been swallowed up by shifting sands, and now rests several hundred feet inland https://t.co/JAbRER0zZt pic.twitter.com/9pwLNShWrz

​Another vessel that lies at rest on the coast is the Dunedin Star, which left from Liverpool during World War II to supply Allied forces with ammunition and other necessities. It reportedly hit an underwater obstacle as it was reaching the coast. This was not the end of the troubles, however. A plane sent to provide food and water to the survivors crashed, while a tugboat also failed to reach them.

#Namibia, the Atlantic Coastline, named after the book about the shipwrecked Dunedin Star - https://t.co/y5r406GQYN pic.twitter.com/T3IqYiXAHr

​However, good things happen on the Skeleton Coast too. In 2016, a group of miners unexpectedly discovered the debris of a Portuguese ship with 2,000 golden coins.

​Archaeologists then dug out the wreckage and discovered that it was a 16th century vessel. Despite its ominous name and bad reputation, the Skeleton Coast is a beautiful location. It often appears in movies, while iconic drummer Billy Cobham wrote an album after visiting the area.