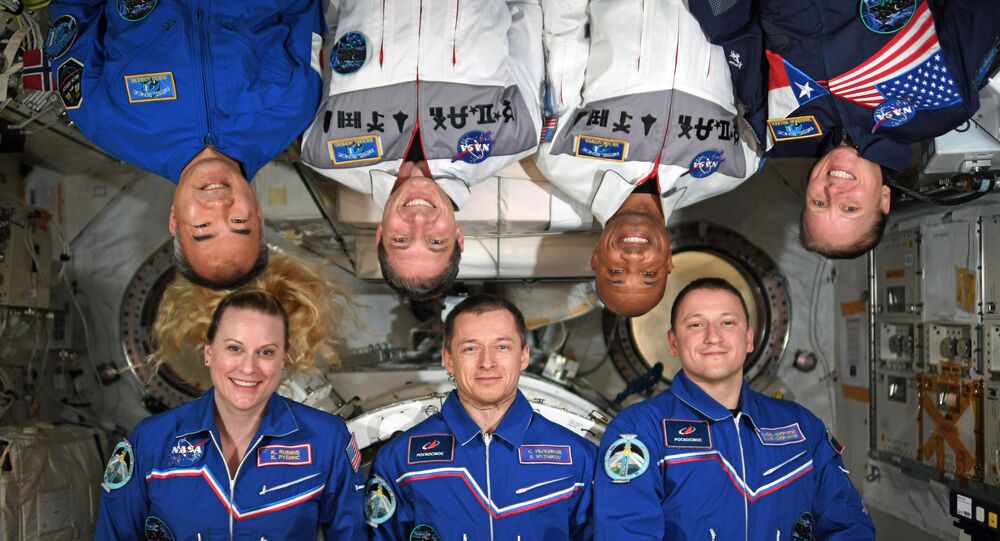 WASHINGTON (Sputnik) - The crew on the International Space Station (ISS) has faced unique challenges while producing a new virtual reality documentary although factors such as weightlessness have also provided an advantage, Russian cosmonaut and ISS engineer Sergey Kud-Sverchkov told Sputnik.

In December, Russia’s Space Agency Roscosmos announced it is producing a documentary series - together with Canada's Felix & Paul Studios - called "Space Explorers: The ISS Experience," in a virtual reality format. The studio said filming will run through the first quarter of 2021.

"A peculiarity of filming in space is that the professionals who make films and write scripts have never been to the station, and we, the cosmonauts, have never done professional filming," Kud-Sverchkov said. "In this environment, it is important to have a clear understanding of what should be the result... We have to pay close attention to all the recommendations for shooting, the text, the filming process itself, the correct placement and settings of the equipment, the location of objects and people in the shot."

Due to the tight cosmonauts' schedule, Kud-Sverchkov continued to say, there is often only one take possible. However, the environment also can provide some benefits.

"Here, weightlessness helped us: the camera could even be placed on the ceiling, and after installation it was not necessary to bypass it, as on Earth," Kud-Sverchkov said.

Kud-Sverchkov noted that Russian crew members, including himself, and the expedition commander, Roscosmos cosmonaut Sergei Ryzhikov, have taken part in the filming, while their American colleagues helped them install the camera on every shooting day.

"The location for the camera is a negotiated decision," the cosmonaut explained. "Depending on the plot, on a specific day of shooting, the location was proposed by the director and the creative team, then the possibility of installing the camera in a specific location was evaluated by technical specialists on Earth, but the final decision was made depending on the real situation here at the station."

A unique, specially produced camera is used that has the capability to film in space in a 360-degree format, he added.

"After installing and turning on, the camera stood in the Russian segment of the ISS for several hours and continuously filmed everyday life: whether it was experiments, communication, training or eating," he said.

© Photo : Roscosmos
A photo from the International Space Station (ISS)

Kud-Sverchkov said the task of the virtual reality format is to transfer the viewer to the station in order to experience the life of cosmonauts.

"During the cosmonaut expedition, a significant part of the time is spent on performing experiments. During the past filming days, we filmed three experiments, and also talked about the 3D Bioprinter, thanks to which in the future it will be possible to grow human organs and tissues or, for example, meat for food," he said.

Kud-Sverchkov also underscored that in addition to work, the ISS is a real "space house", and everyday episodes are part of a plot for filming. When asked why such a project as this documentary is interesting to him, Kud-Sverchkov said that he thinks it is important that more people learn about the ISS itself.

"After all, the ISS is a unique example of how people from different countries work together, creating new models of space technology, testing new technologies, and making scientific discoveries," he said. "The use of 3D technologies in the new multimedia project and the creation of the effect of presence makes it possible, albeit virtually, to see the station through the eyes of a cosmonaut, to see how we live and work in space."

He said it is also important that the ISS experience project is international.

"Both adults and, even more importantly, children in Russia and around the world will be able to feel themselves cosmonauts without going into space," Kud-Sverchkov concluded.

Russian Cosmonauts to Be Inoculated With Sputnik V Vaccine Against COVID-19, RDIF Says