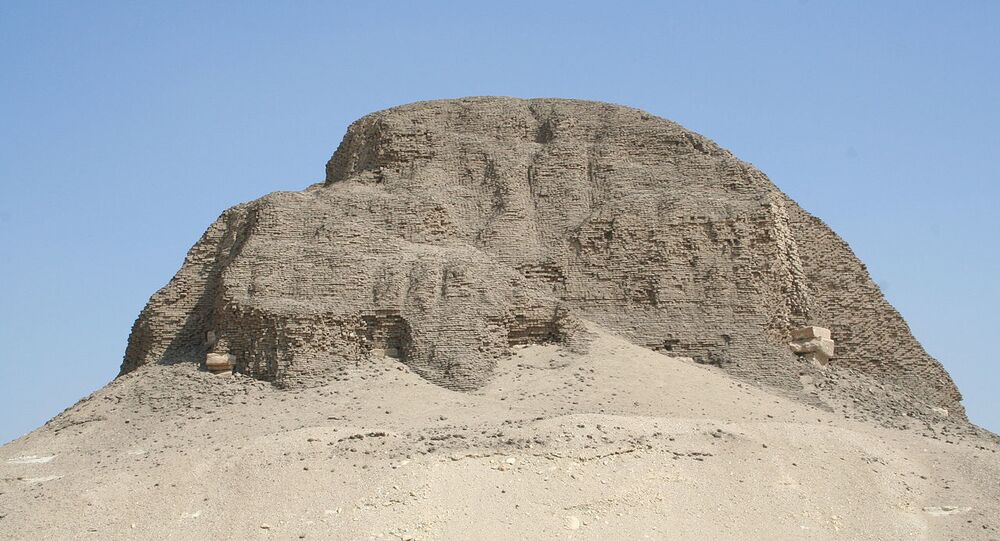 Located in Egypt's western desert, the pyramid of Senusret II resides in an area known as the Faiyum Oasis.

While the Great Pyramid of Giza is arguably the most famous monument in Egypt, the arid expanses of this country harbour a pyramid complex unlike any other, the Daily Express reports.

Citing the Science Channel’s "Unearthed" documentary released this month, the newspaper notes that the structure in question, the pyramid of Twelfth Dynasty pharaoh Senusret II, was “the only pyramid ever built to look like it floats on water."

"Built around 1870BC, it’s a mighty monument clad in gleaming limestone that rises 160 feet above the desert," the series explains. "At the top, a black granite capstone makes a connection to the heavens. Next to it, a smaller pyramid – for the pharaoh’s queen – and eight stone mastaba memorials. It was all inclosed by a huge mud-brick wall. The complex was said to be surrounded by water, seemingly floating in the desert. It stands in Egypt’s vast western desert. This is a fertile area of the desert known as the Faiyum Oasis."

Musing over the pyramid's nature, leading archaeologist Salima Ikram proposed a theory about how the pharaoh managed to make his pyramid look like it was "floating."

"What a sight it must have been for people, to look at something like that – this mountain of a pyramid encircled by water," she said. "We’re in the middle of a desert, but in the distance, you can see there is lots of greenery and vegetation. The fact that there is a lush oasis here means there is a constant supply of water."

The series also notes that their cameras “have been given exclusive access to venture inside this bizarre megastructure for the very first time.”

"We will digitally deconstruct the pyramid’s star-shaped inner-skeleton, reveal its hidden tunnels, unearth its astonishing engineering features and uncover long-lost treasures to solve the mystery of the strangest pyramid of all," the documentary declares.