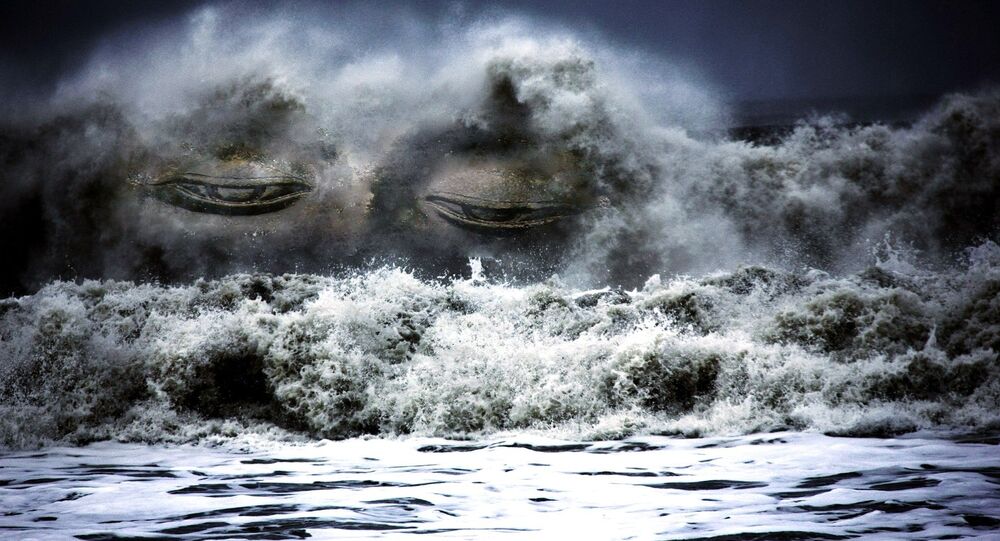 The scientists behind the new study pointed at the nature of the numerous small tunnels they found in what was once the ocean floor, arguing that they are in fact burrows left by the predatory creatures.

Scientists in Taiwan have discovered evidence hinting at the existence of a predatory marine worm that lived 20 million years ago. It's thought the creature is related to the bizarrely named bobbit worm – also known as a "sand striker" – Wired reports.

The bobbit worm, which earned its name from the infamous case of John and Lorena Bobbit that involved a penis being cut off, is an ambush predator that buries its body in sediment on the ocean floor and striking when prey approaches.

Now, researchers believe that the they've found "hundreds of fossilised worm burrows" about 6.5 ft long in sandstone that once was covered by the sea.

20 million year old fossils in Taiwan reveal holes once occupied by relatives of the 2 m long ambush-predatory Bobbit Worm that lurk in shallow waters under the sand, reach out, grab fish and pull them down. https://t.co/ovFMfDkDbW #BedtimeScience pic.twitter.com/WMJUhgkDq0

"This is, we believe, the first time that we've actually found a trace fossil that shows how invertebrates like worms were feeding on vertebrates," said Ludvig Lowemark, National Taiwan University sedimentologist and co-author of the study. "Because, typically, what we find in the sedimentary record is animals that are moving through the sediment."

He also remarked that the burrows show signs of the worms' "active behaviour" as "the worms were actually hiding in the sediment, jumping out, catching their prey, and then dragging this prey down into the sediment."

"The fact that we have a very nice, round shape all the way down, but without any strong lining, suggests that the animal was actually sitting in its burrow system most of the time, and then it rushed out," Lowemark explained. "And the collapse funnels – these feathers at the top – they then represent the struggle of the prey as it is being drawn down into the sediment."

The resemblance of the burrows' cross-sections to a feather, with "the collapse funnels branching off in the sediment on each side," is attributed by the scientists to the worm's feeding habits.

"When the worm has digested its prey, it reemerges at the surface," Lowemark said. "It reestablishes a tunnel system in the middle of these collapse structures, and that's how these feather-like structures around the tube are formed."

However,Terrence Gosliner, senior curator of invertebrate zoology at the California Academy of Sciences – who wasn't involved in the study – argued that the burrows' design does not necessarily suggest that they were occupied by predators.

"I think anytime a worm retracts, it's going to leave similar kinds of feathering and the collapse structures that they talk about, from my standpoint," he said. "They could well be absolutely right, but there are lots of other explanations, too."