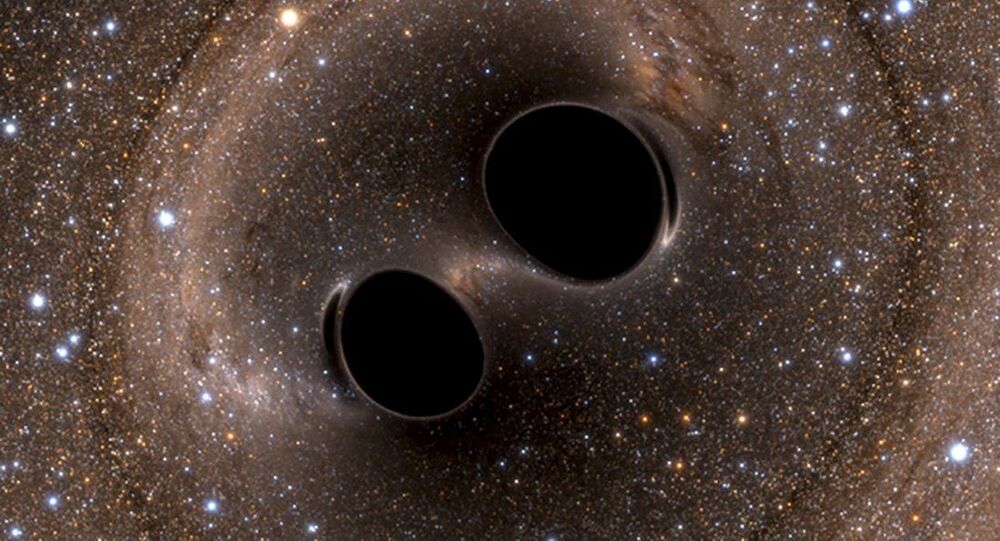 Astronomers first detected gravitational waves in 2016 using the Laser Interferometer Gravitational-Wave Observatory, yet those space-time distortions are loud outbursts, caused when massive objects collide. Researchers are now hoping to detect gravitational waves that are more like the ‘background noise’ of the Universe.

Astronomers have revealed they may be getting closer to probing the as-yet hidden mysteries of a new kind of gravitational wave, according to studies, the results of which were outlined at the 237th American Astronomical Society virtual meeting on 10-15 January.

​Researchers say they may have detected a strong signal of the gravitational wave ‘background’ using a US and Canadian project called the North American Nanohertz Observatory for Gravitational Waves (NANOGrav).

“For the first time, we are seeing significant evidence for a signal in our data that is common among many of the pulsars.” Joe Simon, the lead researcher on this project. #NANOGravAAS pic.twitter.com/JapIutmCk4

​"We're seeing incredibly significant evidence for this signal. Unfortunately, we can't quite say what it is yet," study lead author Joseph Simon, an astrophysicist at the University of Colorado Boulder, said during the AAS press conference.

A 2017 Nobel Prize in Physics had marked the first-ever direct detection of gravitational waves in 2016 using the Laser Interferometer Gravitational-Wave Observatory (LIGO).

Scientists had zoomed in on space-time distortions created when two black holes collided with each other about 130 million light-years from Earth. However, the gravitational waves that LIGO detects are only the very loud and powerful ones that are the result of massive objects colliding.

© AP Photo / Andrew Harnik
visual of gravitational waves from two converging black holes is depicted on a monitor behind Laser Interferometer Gravitational-Wave Observatory (LIGO) Co-Founder Kip Thorne as he speaks to members of the media following a news conference at the National Press Club in Washington, Thursday, Feb. 11, 2016

What has up until now evaded detection is gravitational waves that are described as being like the muted background noise at a crowded party, theoretically generated by merging galaxies and other cosmic events. The result would be what is termed a "gravitational wave background." The discovery would potentially shed light on how galaxies have grown over time.

If we are seeing the first signs of the GW background our models show that continued observations will lead to a detection within the next few years. We are working with our partners in the International Pulsar Timing Array to investigate this signal further. #NANOGravAAS pic.twitter.com/SoqkL6LZK0

​The gravitational wave background ripples might be years or decades long.

NANOGrav uses telescopes on the ground to monitor dozens of pulsars, as gravitational waves can alter the blinking pattern of light from pulsars, and expanding the distances these rays travel through space.

"By monitoring signals from a large number of these pulsars, we created a galaxy-size gravitational-wave detector within our own Milky Way," said Joseph Simon.

"As these waves pass us, the Earth gets pushed around very slightly. As Earth is pushed closer to pulsars in one part of the sky, those pulsars' pulses will appear a little bit sooner than expected, and pulses from pulsars in the other part of the sky appear to come a bit later," added the scientist.

The NANOGrav team attempted to observe as many pulsars as they can for as long as possible, with 45 pulsars under observation throughout a period of at least three years, and in some cases – over a dozen years.

The scientists are keeping an eye out for ‘a few hundred nanoseconds’-worth of deviations in the timing of the spinning pulsars. Hinting at a breakthrough in the research, the team says they have detected potential evidence of a common process distorting the light from many of the pulsars.

The scientists are cautiously optimistic, as they concede that they cannot verify whether this signal is evidence for the gravitational wave background.

“…But we also don't have evidence against it," says Simon.

The team agrees that prolonged follow-up studies of more pulsars may confirm whether the gravitational background is the cause of the distortion they detected.

The next step, pending that, would be to determine what causes these waves and what mysteries about the Universe these signals can unmask.

Joseph Simon and his colleagues also detailed their NANOGrav findings on 24 December 2020 in the journal The Astrophysical Journal Letters.