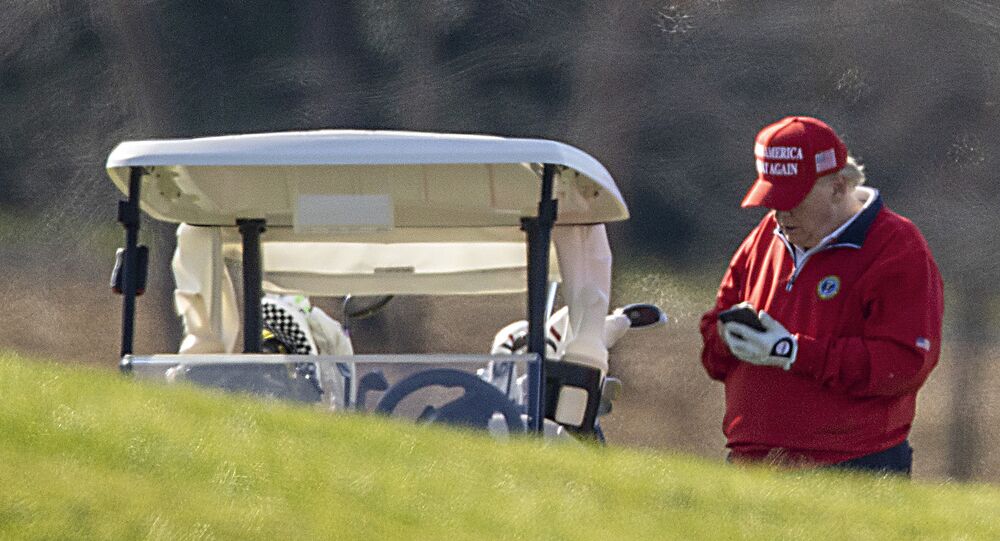 US President Donald Trump ended up permanently banned from Twitter last week in the wake of the violent, deadly riot that broke out at the US Capitol following the president’s remarks to supporters to not allow the US election to be “stolen.”

Emerging reports on Wednesday indicated that efforts by Trump to open accounts on alternative social media platforms Parler and Gab were quickly halted by his son-in-law Jared Kushner and Dan Scavino, the president’s deputy chief of staff.

Citing an outside adviser and an administration official, CNN reported that Kushner and Scavino went against a push from fellow White House aides, including personnel chief Johnny McEntee, to set up accounts for Trump on the platforms.

© AP Photo / Alex Brandon
In this Thursday, Dec. 7, 2017, file photo, U.S. President Donald Trump speaks with White House Senior Adviser Jared Kushner as he departs after a reception in the East Room of the White House, in Washington

It’s unclear how many of Trump’s aides were in support of creating the new accounts or if the commander-in-chief was aware of the since-stopped operation, or if he knew that Parler was under review by Google Play and Apple’s App Store.

Parler, an alternative platform favored by conservatives for its lax restrictions on users' speech, was recently booted from both Apple and Google stores, with Amazon dropping the app from its web-hosting service for repeatedly failing to effectively moderate content. Parler CEO John Matze revealed in an exclusive interview with Reuters that the app may “never” return.

Similar to Parler, Gab is an alternative platform that claims to champions free speech and is popular among conservatives. The network began to gain traction among conservatives after Twitter and similar platforms began to crack down on users associated with the alt-right movement. Parler’s suspension has prompted Gab to gain hundreds of thousands of users, according to Fortune.

To date, Trump has either been permanently or indefinitely banned from the majority of mainstream social media platforms - such as Twitter, Facebook, Instagram, Snapchat and Twitch, with Reddit banning prominent communities of his supporters - after the president was widely condemned for inciting the Capitol riot.

Trump made attempts to regain access to Twitter late Friday after his personal account was suspended; however, his efforts to circumvent the ban were not successful. It’s worth noting that the president did manage to briefly send out a tweet through the @POTUS account before the account was subsequently blocked. The momentary return to Twitter saw the president complaining about Twitter infringing on free speech and Section 230 of the Communications Decency Act, also claiming that he was considering the “possibilities of building out our own platform in the near future.”

An effort by Gary Coby, Trump’s digital director, to hand over control of his own account to the president was also fruitless.

More recently, Google-owned YouTube announced on Wednesday that it would be placing Trump’s channel on a seven-day suspension after it uploaded a video that violated company policy. The video-streaming company also issued a warning against the White House account over two videos that broke rules.