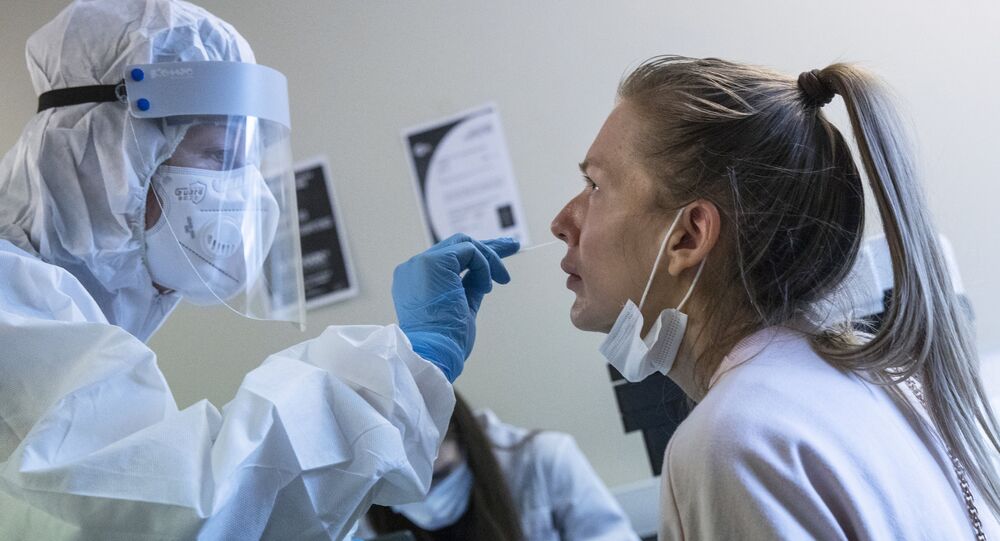 MOSCOW (Sputnik) - A Russian lymphoma patient with long-term COVID-19 has acquired 18 mutations of the virus in over four months duration of the disease, according to the preprint of a study published at virological.org.

The study, released in early January, is authored by researchers from the Skolkovo Institute of Science and Technology, the Institute for Information Transmission Problems of the Russian Academy of Sciences, Pavlov First State Medical University of St. Petersburg, Smorodintsev Research Institute of Influenza, and a St. Petersburg city hospital.

"We report a genomic analysis of SARS-CoV-2 from a lymphoma patient with long-term COVID-19. This genome is characterized by an independent gain of 18 new mutations over more than 4 months of the disease. These include the S:Y453F and Δ69-70HV mutations (‘the ΔF combination’) which have formerly been associated with mink-related clusters," the preprint read.

The mutations developed in a 47-year-old female lymphoma patient, who goes by Patient S in the study. Patient S likely contracted the virus when she was on planned chemotherapy in a hospital.

"Between April 10 and April 16, she had close contacts with an elderly woman, Patient A, who was transferred to her ward and later was tested positive by PCR for COVID-19 (the swab was taken on April 10). Patient A later died of COVID-19 pneumonia," the research said.

On April 17, patient S was discharged from the hospital. On April 30, she tested positive for COVID-19.

The researchers note that persistently positive polymerase chain reaction test for SARS-CoV-2 "occurs in a fraction of COVID-19 patients, and is usually associated with suppressed host immune system." The virus, they suggest, undergoes "rapid accumulation of mutations" in these individuals.