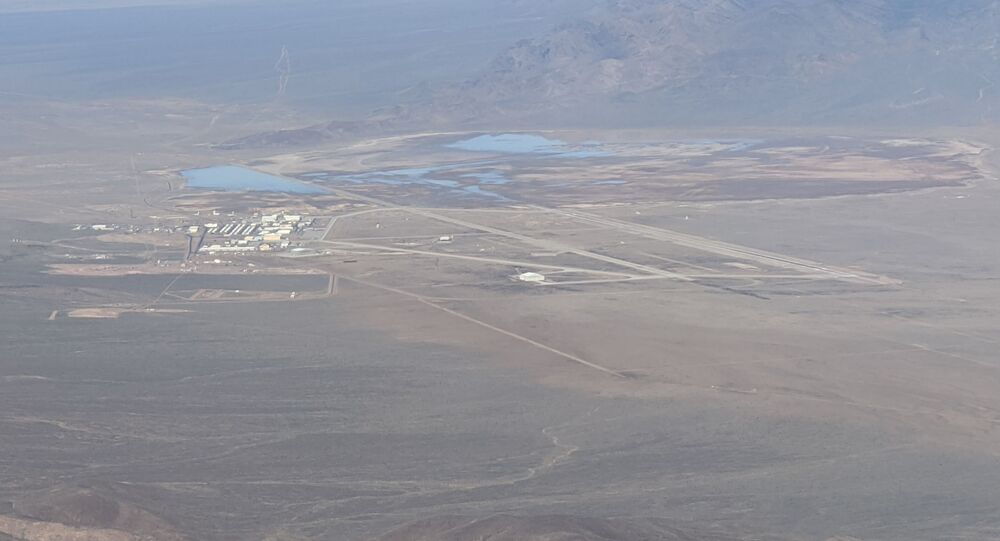 Area 51, the common name of the secretive US Air Force facility located within the Nevada Test and Training Range (NTTR), has been subject to conspiracy theories since it was discovered, as UFO enthusiasts try to prove the existence of extraterrestrial life.

Private pilot Gabe Zeifman took off in his tiny Cessna 150 on Christmas day in southern Nevada to unveil some stunning bird's eye images of Area 51 within the Nevada Test and Training Range (NTTR).

The amateur photographer made a spectacular flight around Papoose Dry Lake before gliding over Groom Lake, home to Area 51, rumoured to contain UFOs. He took almost 1000 snaps of the landscape beneath.

One of the photos, shared with Mystery Wire, captured a mysterious object, part of which can be seen sticking out of a hangar entrance to the south of the NTTR complex. It's triangular and blurred, so it can't be discerned with any certainty, but given the reputation of the area, speculation is rife.

NEW #Area51 and #PapooseLake photographs show incredible details from new angles. And is that an open hangar door I see?https://t.co/7vyVyZOd8E#mysterywire #UFOTwitter pic.twitter.com/rv6ELOxjNX

Two composites of Zeifman's photos show both the northern and western area around the facility in great detail – all research there is believed to be top secret. The existence of the base was first acknowledged in 2013 after the CIA built it six decades ago.

The Area 51 base is thought to be devoted to developing experimental aircraft and equipment, but UFO enthusiasts maintain that the facility studies – and even houses – alien intruders.

During the summer 2019, UFO hunters promoted a “storm Area 51” viral event in a bid to “see them aliens.” However, none of the hundreds of thousands participants who signed up for the event managed to sneak into the heavily guarded site – the US Air Force has vowed to “discourage anyone from trying to come into the area where we train American armed forces.”

Zeifman, who occasionally flies over the facility, is not breaking the law, argues Mystery Wire, which unveiled a bunch of his pics. As a trained air traffic controller, he's apparently able to fly through the airspace after getting the necessary clearance, so it's likely he'll be capturing more images for curious minds to investigate in the future.