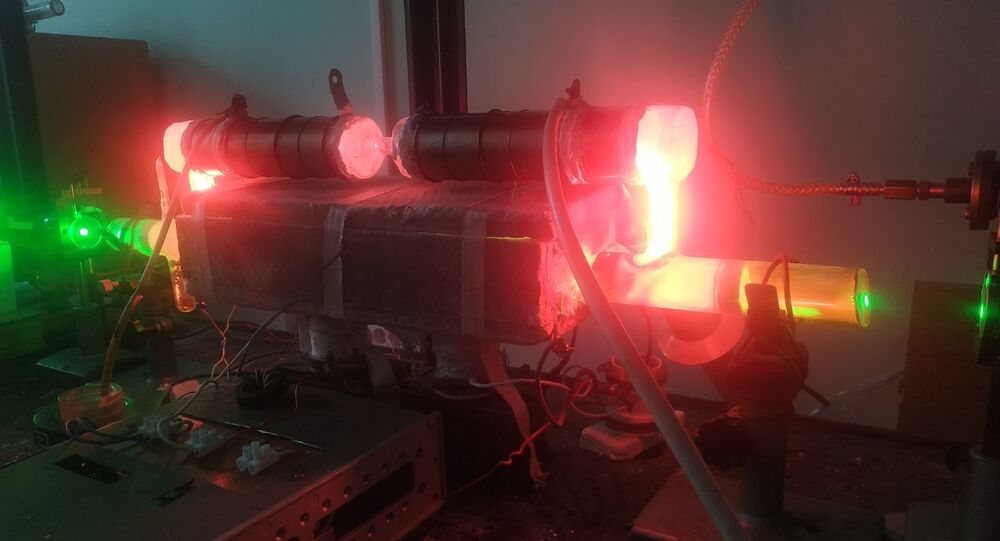 Scientists at the Zuev Institute of Atmospheric Optics at the Siberian Branch of the Russian Academy of Sciences (IOA SB RAS) jointly with colleagues from Tomsk Polytechnic University (TPU) have developed a fundamentally new design of high-frequency amplifier for optical signals.

The development improves the brightness of images in laser monitors with a record pulse repetition frequency (PRF) excited by a barrier and capacitive discharge. The study's results were published in the journal Optics Communications.

Brightness amplifiers are used to increase the luminous flux in optical systems such as lasers, projectors, and laser monitors. In practice, amplifiers based on pulsed metal vapour lasers are widely used. They have relatively high efficiency and operate at a high pulse repetition frequency, which provides reasonably good temporal resolution. In these optical signal amplifiers, light passes through a gas discharge tube in which metal pairs are activated (excited) by a discharge between the electrodes located inside the tube.

Scientists at IOA SB RAS have developed an alternative amplifier design that excites vapours with a longitudinal capacitive discharge. Electrodes in this device are located outside the gas discharge tube, which gives the design significant advantages, the authors note.

“To excite the active environment, we used a capacitive barrier discharge instead of a traditional discharge. This means that the material of the electrodes in our device does not come into contact with the chemically aggressive medium of the brightness amplifier. The key advantage of our design is the ease of manufacture and longer life of the device. Thanks to the optimised operating mode, we were able to achieve a record-breaking 24 kHz pulse repetition frequency for image brightness amplification compared to the previously achieved values (17 kHz), and this is not the limit”, senior researcher at the Laboratory of Quantum Electronics of IOA SB RAS and Associate Professor at the TPU Division for Materials Sciences Maxim Trigub says.

The scientists used copper bromide (CuBr), excited by a discharge with a pulse repetition frequency (PRF) of up to 24 kHz, as a substance for the active medium of the amplifier. They experimentally estimated the concentration of CuBr vapours for the most efficient operation of the device. It turned out that the optimal amplification was achieved not at maximum output power, but at a concentration of the CuBr vapours approximately one-third lower.

Scientists from IOA SB RAS and TPU have been engaged in joint work for many years under the supervision of Professor Gennadiy Evtushenko to study the specifics of active media on metal vapours and their use in solving problems of optics, laser physics, processing, and obtaining materials. They plan to focus further research on improving the efficiency of the developed brightness amplifier and its application to create laser monitors of various spectral ranges. The research work is supported by the Russian Science Foundation, Project No. 19-79-10096.