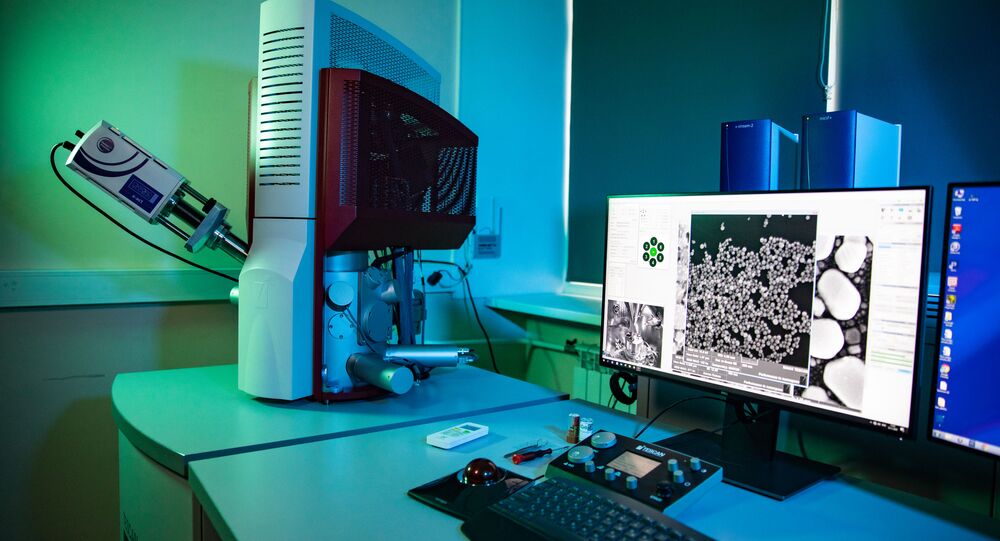 Light That Kills Bacteria: Alternatives to Antibiotics Created in Russia

The World Health Organisation is convinced that one of the greatest threats to humanity is the rapidly growing resistance of bacteria to antibiotics due to their uncontrolled use. One Russian scientific project, the physical part carried out by specialists at MEPhI, offers a possible solution to this problem.

The new development will facilitate treatment of hard-to-heal wounds, burns, and other foci of the bacterial threat, the authors claim. For the latest on the achievements of Russian scientists, read Sputnik’s new material.

Scientists believe that one solution to this global challenge could be the development of antibacterial photodynamic therapy (aPDT). According to numerous studies, pathogens cannot develop resistance to this type of treatment.

The antimicrobial effect of aPDT is based on the use of special substances, photosensitisers, which are injected into the body and irradiated with light using a special emitter in the course of treatment. The resulting light energy is transmitted to oxygen molecules and transforms them into an active form that fights the infection.

A team of scientists, including physicists from the Prokhorov General Physics Institute of the Russian Academy of Sciences (GPI RAS) and National Research Nuclear University MEPhI, microbiologists from the Gamaleya Research Institute, and chemists from the State Scientific Centre “Research Institute of Organic Semi-Products and Dyes” (NIOPIK), suggested the use of synthetic polycationic bacteriochlorins as photosensitisers. Unlike most antibiotics that target only one type of bacteria, these compounds have a universal effect in aPDT treatment. Scientists believe that this will eliminate the need to identify the type of bacterial threat in clinical practice, thereby saving time and resources.

According to the WHO's guidelines, any drug that reduces the number of active pathogen cells by at least 103 times is considered to be an effective antibacterial agent. According to MEPhI scientists, the bacteriochlorins they use exceed this figure by at least 10 times.

What Do Bacteria Fear?

First of all, this efficiency is achieved due to the potent ability of bacteriochlorins to absorb light and subsequently transfer energy to the oxygen present in the body. The rapid destruction of bacteria is ensured by the effect of the active form of oxygen “charged” with energy from the photosensitiser.

Secondly, bacteriochlorins have a positive electric charge in a solution, which, according to recent studies, increases the effectiveness of photosensitisers against bacteria both in a free state and in biofilm form.

Thirdly, bacteriochlorins effectively absorb light in the near-infrared range. The scientists explained that this region of the spectrum contains the so-called “transparency window of biological tissues”, meaning that light of this wavelength can penetrate much deeper into the tissues of the body. Furthermore, the light absorption of pigments emitted by certain pathogenic bacteria is reduced in this spectrum, enabling significantly more energy to be applied to activate the photosensitiser.

“The experiments showed high efficiency of bacteriochlorins against strains of antibiotic-resistant bacteria, and these were both less aggressive Gram-positive bacteria and more aggressive Gram-negative bacteria. This greatly increases our chances of success in real clinical trials”, a postgraduate student at the Institute for Physics and Engineering in Biomedicine at MEPhI, Ekaterina Akhlyustina, said.

Let There be Light

The most promising area of application of antibacterial PDT is the treatment of severe and long-lasting infected wounds and burns, MEPhI researchers believe. According to them, this technique is not only able to speed up healing, but can also provide a good cosmetic effect.

“These compounds can already be used at the current stage of testing for technical purposes – for example, for effective surface disinfection in hospitals. We hope to subsequently develop a medicinal product based on bacteriochlorins for use in human and veterinary medicine”, Ekaterina Akhlyustina said.

According to the scientists, one of the physical problems in the development of the aPDT technique is the aggregation of photosensitiser, that is, the formation of “lumps” of the substance that significantly reduce the effectiveness of the therapy. The specialists at MEPhI are conducting action research to combat this phenomenon.

Experts from MEPhI also explained that it is necessary to carefully study the stability and photodynamic properties of the synthesised compounds when developing new photosensitisers. This will subsequently allow correct dose adjustments for creating the dosage form of the new compounds. The main thing for aPDT to be effective, as the scientists explained, is to select the necessary concentrations of substances and the right light irradiation dose.

The chemical compounds used by the research team as photosensitisers have already been patented. The next task facing MEPhI researchers is spectroscopic studies of stable bacteriochlorin compounds with minimal aggregation, as well as preparation for tests on organs and tissues of animals and humans.