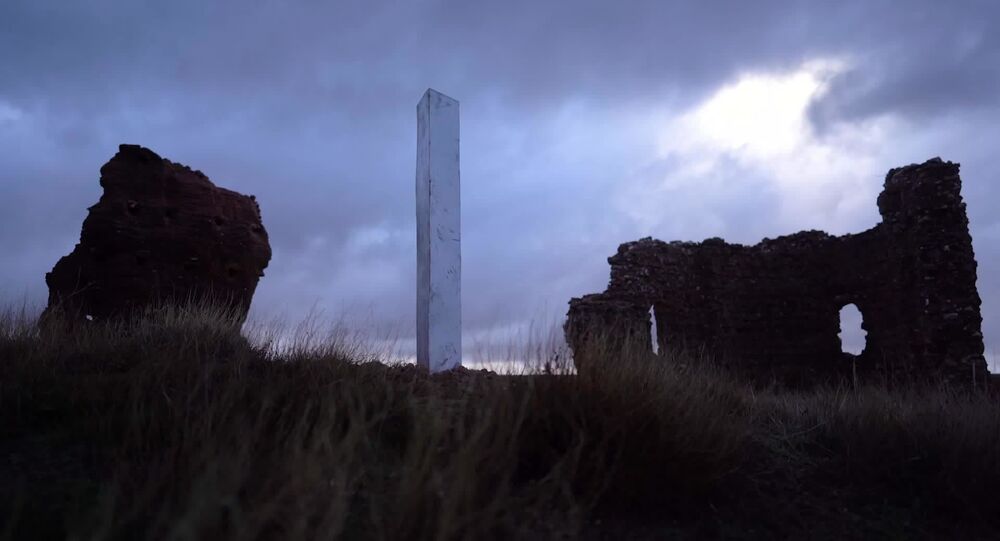 'This is so Cringe': Netizens' Interest Wanes as Latest 'Mystery Monolith' Found in Spanish Ruins

From Romania, to the US, to England and the Netherlands, the saga of the “mystery monoliths’ has been unfolding for several weeks now, unleashing a torrent of theories regarding the origins of the tall metal structures.

In the latest chapter in the strange “mysterious monolith” saga, another obelisk has reportedly been spotted, this time near the ancient ruins of Santiago Church outside Ayllon in Segovia, central Spain, according to reports.

​The sleek, three-meter high metal structure bears an uncanny resemblance to those which have been inexplicably popping up and subsequently disappearing in countries around the world in the last few weeks.

Since the latest discovery is located in proximity to ancient ruins, several media outlets reported that the mayor of Ayllon had issued an appeal to residents to refrain from visiting the monolith.

However, María Jesus Sanzhas denied that the local city council has issued such a notice, according to the newspaper El Adelantado.

According to Sanzhas, she had visited the monolith, and described it as a rudimentary structure. The three metal sheets forming it have reportedly collapsed several times.

The phenomenon of monoliths has been making the rounds of headlines since the appearance of the first one in a remote part of Utah. On 18 November a helicopter crew who were out counting bighorn sheep spotted the structure, estimated to be around 10-12 feet tall, made from metal, and planted in the ground, sparking comparisons to Stanley Kubrick’s movie 2001: A Space Odyssey.

However, the structure subsequently disappeared as suddenly as it had appeared.

Monolith Discovered in Utah Desert Has Everyone Buzzing Over ‘2001: A Space Odyssey’ https://t.co/t3Hfr3z89v pic.twitter.com/QsPnpCHrEh

​On 27 November a similar object turned up in northern Romania, on Batca Doamnei Hill, in the city of Piatra Neamt, facing what is known as the Holy Mountain.

A metal monolith appeared at a scenic spot in northern Romania over the weekend after a similar structure was discovered – and then disappeared – in the Utah desert. https://t.co/NEcaqTPPsU pic.twitter.com/HhTulBriiG

​However, this object was reportedly not as sleek or well-built as the first, and also disappeared.

A day later, on 2 December, another “2001”-esque structure was spotted on Pine Mountain, California.
The construction differed from the preceding one in that it was not secured to the ground and could be knocked over. The monolith was soon removed and replaced it with a cross, according to reports.

On 4 December a 10-foot monolith was discovered standing under the Fremont Street Experience canopy in downtown Las Vegas.

Sunday was particularly generous in “monolith sightings” as the Netherlands offered up its own contribution to the obelisk hysteria. Located in a nature reserve near Oudehorne, the object was unlike the previously-found monoliths as it was not shiny.

The same day another monolith, around ten feet tall and very reflective, was found on the Isle of Wight, off the south coast of England, UK by a group of people walking their dog on the island's Compton Beach.

Monolith discovered on Isle of Wight similar to ones found in US and Romania https://t.co/3cxShYYRNd pic.twitter.com/2EetiKmm4b

​A raft of conspiracy theories have been triggered by speculations over the origins of the structures.

Some people believed the first monoliths were part of a marketing campaign or publicity stunt, while others have more far-fetched ideas of the objects being placed by aliens. A small community of “stunt artists” known as The Most Famous Artist also reportedly claimed credit for the US sculptures.

The “adventures of the monoliths” have generated a great deal of attention on social media.

After news of the most recent appearance hit Twitter, netizens weighed in, although some seemed to intimate that interest in the phenomenon was waning.

I dare the aliens to put one in Philadelphia. Would it face the same fate as hitchbot?

Someone is having a good laugh

this is so cringe