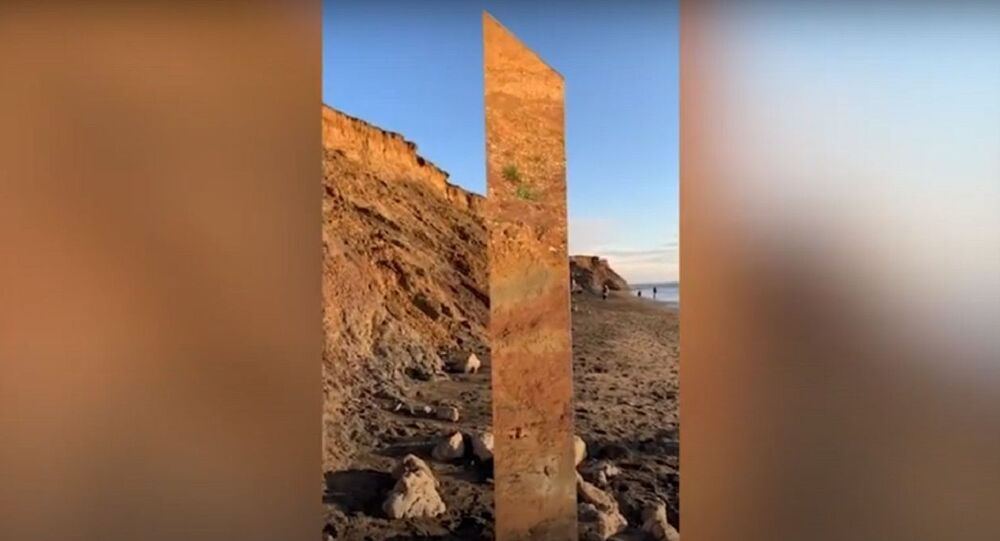 The new find comes hot on the heels of similar discoveries made just days ago, as mysterious structures popped up first in a Utah dessert, then on a hill in Romania, and last week on a mountaintop in California.

As speculations have not yet died down over the origins of the first few discovered ‘mysterious monoliths’, apparently a fourth such intriguing structure has materialised.

Similar to the previous ones, found in the US and Romania, this one has been spotted on the Isle of Wight.
The mystifying tall metal object was spotted by a local on the island off the south coast of England on Sunday, Sky News reported.

Monolith discovered on Isle of Wight similar to ones found in US and Romania https://t.co/3cxShYYRNd pic.twitter.com/2EetiKmm4b

​29-year old Tom Dunford was walking his dog with his fiancée and sister on Compton Beach when he came upon the three-sided silver object.

“I knew about all the monolith stories recently, so I recognised it straight away,” said Dunford, adding that this structure was approximately 10-feet tall and “really reflective".

The local added that in his opinion someone was “playing a practical joke”.

“The person who put it there knows what they’re doing,” said Dunford.

Locals, however, were said to be flocking to the site to marvel at the odd structure and trade opinions as to its source.

The mystifying triangular monoliths bear an uncanny resemblance to the one featured in Stanley Kubrick's film 2001: A Space Odyssey. They have been making headlines and trending on social media ever since the first was found in a Utah dessert.

Monolith Discovered in Utah Desert Has Everyone Buzzing Over ‘2001: A Space Odyssey’ https://t.co/t3Hfr3z89v pic.twitter.com/QsPnpCHrEh

​The object, estimated to be around 10-12 feet (3-3.6 metres) tall, was found planted in the ground in the rocky wilderness by a group of state employees counting sheep from a helicopter in late November, immediately sparking speculation about how it had come to be there. However, by 29 November, it had mysteriously vanished.

On Facebook, the Utah Bureau of Land Management said:

"We have received credible reports that the illegally installed structure, referred to as the 'monolith' has been removed from Bureau of Land Management (BLM) public lands by an unknown party."

NEW - A metal monolith identical to the one recently found in #Utah has just appeared on a hillside in Romania. pic.twitter.com/kR6Kkg23xr

​Subsequently, a similar object was found on a hill in Romania, only it disappeared as well, and finally last week, another was spotted: atop Pine Mountain, near the small town of Atascadero, California.

There is currently a monolith at the top of Pine Mountain in Atascadero!!

​As to the theories about the monolith’s origins, some linked the objects to UFOs and aliens, other suggested this was a marketing ploy.

Meanwhile, a small community of “stunt artists” known as The Most Famous Artist has claimed credit for the US sculptures. The artists have even offered more of the works for a sum of $45,000 apiece.

The group didn’t appear to be behind the latest object on the Isle of Wight, though, as founder Matty Mo was cited as telling New York Post in a message that, “The monolith is out of my control at this point,” adding:

“The idea was to start a global phenomenonю I’d say mission accomplished. I hope every city gets a monolith. It brings people together and spreads joy.”