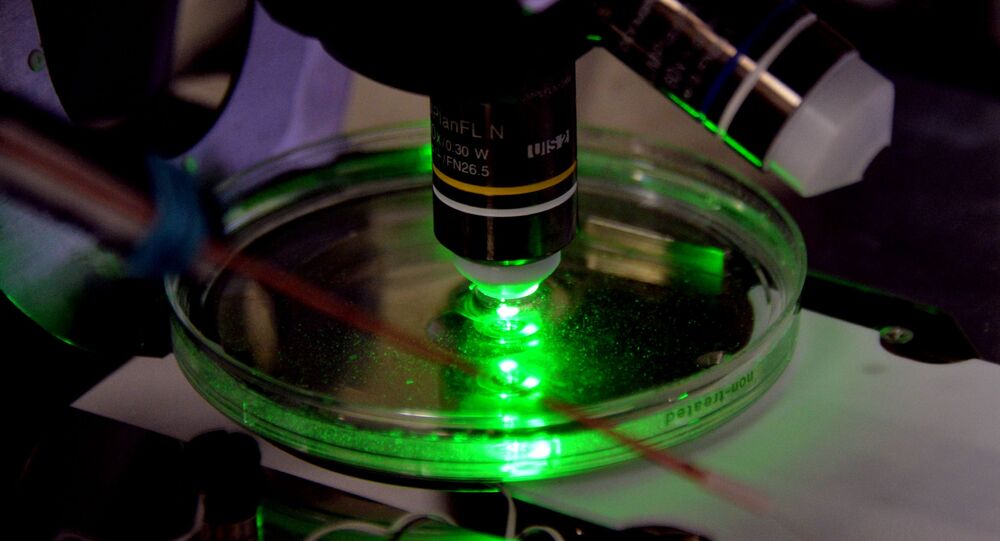 Dozens of Terabits Per Second: Russian Physicists Reveal the Creation of Future Technologies

In the long-term, photonics-based devices will almost completely replace the electronics we have been using, scientists from the National Research Nuclear University "MEPhI" told Sputnik, commenting on the advanced Russian developments accelerating technology in this area.

Wireless communication at speeds of dozens of terabits per second, data processing at a rate of dozens of gigabits, and holograms that create three-dimensional images "in the air" are just some of the most pressing goals of modern photonics, scientists have said.

When will standard electronics become obsolete?

Photonics is a branch of science and technology dealing with the processes of light emissions, their recording, and changes to their properties. Photonics-based technology doesn't only include optical connections and laser discs, but also many other promising devices. The 21st century is the century of photonics, believe scientists from the "MEPhI" Institute For Laser and Plasma Technologies.

According to the scientists, photonics will revolutionise developments in older technical systems and make a seminal contribution to the emergence of fundamentally new ones in the next 10-20 years. First off, there will be public digital communications with speeds of terabits per second, data processing systems with a bandwidth of dozens of gigabits per second, as well as gigapixel displays – 2D, 3D, and holographic.

A key advantage of photonic technology is its informative properties of light. Optical signals possess a natural vibration frequency that is thousands of times higher than radio signals, so their parameters can be changed much more rapidly, the "MEPhI" scientists explained. The range of frequencies transmitted by the light signal is extremely broad - one optical channel can, for instance, transmit all radio bands all at once.

"When transmitting the light, it is possible to form two- and three-dimensional spatial distributions which present data, while an electrical signal travelling through a conductor is one-dimensional. Due to this, photonic systems operate at a greater speed and energy efficiency than their electronic predecessors we use today", "MEPhI" Professor Rostislav Starikov said.

Holographic video: the reality of tomorrow

The technology to form a light signal has made it possible to record and reproduce holographic videos. National Research Nuclear University scientists, however, argue that the systems are still expensive and imperfect, and for mass production several problems need to be solved. In particular, there are difficulties with the fast reproduction of holograms, as well as with their transmission over existing digital communication networks.

Smart data and fast playback of three-dimensional video from digital holograms are being developed at the National Research Nuclear University (MEPhI)'s Institute For Laser and Plasma Technologies with assistance by the Russian Science Foundation under project No. 20-79-00291. The scientists are confident that the research in this area will make commercial holographic 3D video systems commonplace by the mid-2030s.

"We have proposed and successfully tested a new method for the binary representation of digital holograms, which allows for holograms to be re-encoded in a form that is more suitable for transmission, as well as new methods of compression that are significantly superior to analogues and provide an acceptable level of quality loss in the resulting images", MEPhI Associate Professor Pavel Cheryomkhin said.

What will photon radio bring to the world?

Another promising research area is microwave photonics, or radiophotonics, which investigate the possibility of transmitting and processing radio signals through the use of light. Such systems bypass conventional radio systems in terms of noise immunity, weight, and size specifications. What is more important though is that radiophotonic systems provide an extremely broad signal bandwidth, over 100 gigahertz.

Russia and the international community are currently implementing photonic transmission lines for radio signals that possess enormous information capacity, the "MEPhI" scientists reported. The emergence of devices in which light is also used for processing radio signals - photonic radars – is practically inevitable. An active phased antenna array (AFAR) based on photonics, which will allow for the tracking of any type of targets with high accuracy at a great distance, is also highly anticipated.

Theoretical and experimental research in the field of analogue-digital systems of microwave photonics has been successfully carried out at the "MEPhI" Institute For Laser and Plasma. Specialists from the Laboratory of Optical Information Processing have created a photonic system for the analogue-digital processing of radio signals in the centimeter range.

Based on this device, specialists from "MEPhI", together with scientists from other Russian organisations, have created one of the first radio engineering systems with microwave photonic elements in the world. The latter has already successfully passed field tests as well. As the scientists explained, such devices are much lighter and more energy efficient than their electronic counterparts.

Looking ahead, optical-digital systems that use the parallel processing of spatial optical signals will be able to provide data processing at a speed of up to 100 gigabits per second. The systems can be used, for instance, in image recognition or data coding. Research in the field of processing two-dimensional optical signals was also carried out at "MEPhI" and was focused on the creation of diffractive and holographic systems using coherent laser and incoherent radiation.

"Our team is successfully developing methods for the high-speed and high-precision formation of specified informative light distributions, which will allow us to represent huge amounts of information without errors and losses", Rostislav Starikov said.

A new type of optical-digital diffraction system is being developed and designed for encoding information at the National Research Nuclear University "MEPhI" Department of Laser Physics under the leadership of Professor Nikolay Evtikhiev, within the framework of the Russian Science Foundation project No. 19-19-00498. A binary data encoding system has already been created and tested, providing a working speed of dozens of gigabits per second.

Other research by the department's specialists is aimed at creating high-speed smart systems to recognise visual images. According to the scientists, the possibilities of recognising megapixel images at a speed of over 10,000 frames per second have been demonstrated, which is hundreds of times higher than the potential capabilities of electronic analogues.