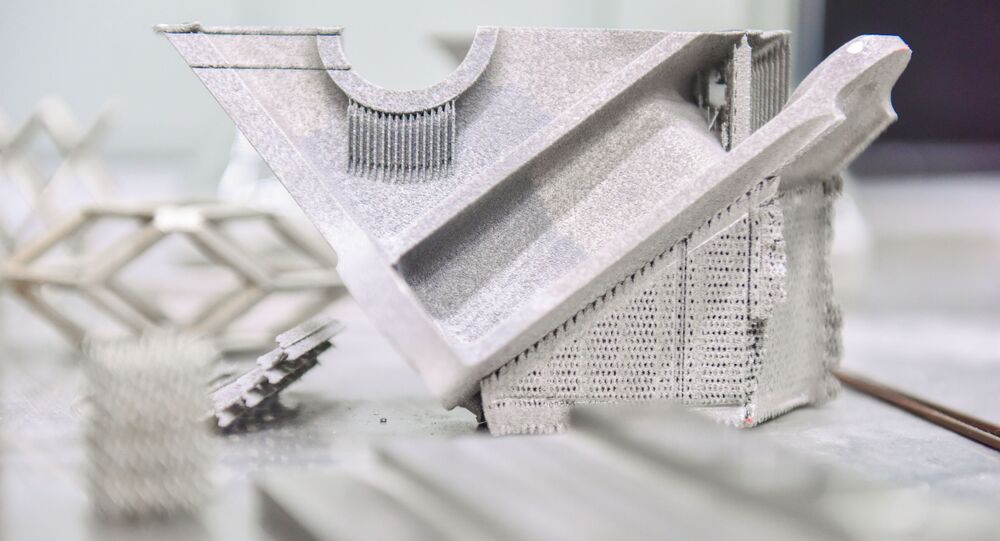 Additive technologies pertaining to layer-by-layer build-up and synthesis of objects with the help of computer 3D technologies are currently coming to prominence in the construction of space equipment.

Scientists believe that 3D printing may provide a significant boost to extraterrestrial exploration.

How can the 3D printing of structures in space be optimised and their security increased? How can superlight optic systems for nanosatellites with the help of new technologies be created?

Researchers from Russian universities that are part of the Project “5-100”, have detailed their advances.

One of the key advantages of the new approach lies in the fact that one 3D printer can replace loads of conventional factory equipment.

In November 2020, the magazine Forbes included additive technologies (from Lat. additivus) into the list of five new revolutionary technologies that entrepreneurs should pay attention to.

The authors of the review noted that additive technologies could provide many benefits in the aerospace industry, where the weight of a product is not infrequently the highest cost factor.

The use of 3D printing in space may significantly speed up the exploration of extraterrestrial land; additive technologies are also actively penetrating rocket manufacturing.

The helmets of astronauts Robert Behnken and Doug Hurley, who participated in the launch of a Falcon 9 rocket on the space ship Crew Dragon on 30 May 2020, were manufactured to measure with the use of the 3D printing technology.

According to the head of aerospace company SpaceX, Elon Musk, with the help of 3D printing it is possible to make solid and high-capacity engine parts for less money and at a fraction of the time spent on a conventionally produced item. The company unveiled the first part printed using a 3D printer back in 2014.

The aerospace company Blue Origin uses additive technologies for printing components on the BE-4 engine. Young rocket companies from the US (Relativity Space) and Britain (Orbex) are also planning to exploit 3D printing opportunities as widely as possible.

Meanwhile, even slight defects in structures printed using 3D printers play a vital role in the security of the manufactured equipment.

Academics from the National University of Science and Technology "MISiS" have managed to upgrade the technology for aluminium 3D printing by boosting its hardness by 50 percent.

According to MISiS researchers, the main risk of such defects is carried by the high pore volume of the material, caused, among other things, by the peculiarities of the original aluminium powder.

To arrive at an even and thick microstructure of printed items, the scientists suggested adding carbonic nanofibres to aluminium powder, which help make the pore volume low and boost the hardness of the material by 50 percent. The results of the research have been published in the journal Composites Communications.

“Carbonic nanofibres have high thermal conductivity, which helps minimise temperature gradients between printing layers throughout the synthesis of items, at the selective laser melting stage. Thanks to this, almost all inhomogeneity can be completely removed from the microstructure of the material”, recounted MISiS professor, Alexander Gromov.

The carbonic nanofibers used are a byproduct of the manufacture of oil-associated gases. During its catalytic decomposition, carbonium assembles in the form of nanofibres on the dispersive metal particles of the catholyte. Oil-associated gases are usually burned at mines, which is harmful for the environment, and thus the use of the new method is also important from an ecological point of view, the researchers pointed out.

To Optimise Manufacturing in Space

3D printing may be used in would-be space missions, such as the colonisation of Mars, Elon Musk and other specialists say.

In order to live on Mars, it is essential to have an opportunity to start to manufacturing there and, ideally, make use of locally extracted materials. It will be possible to use 3D printers to lay the foundation and build an ecosystem there.

Even now, in the International Space Station, the issue of material accessibility is quite pressing, as astronauts have to wait several months for cargo ships.

Some important tiny component may break or be lost, for instance, plastic blind plugs for electric connections. In these cases, a 3D printer, which is capable of printing plastic items in space, makes it possible to resolve the issue.

In the future, during interplanetary flights, the problem of accessibility will become even more burning, and such a printer will be in greater demand.

In 2016, to produce tools, equipment, and everything that may come in handy during a space mission, NASA directed the company Made in Space to set up a permanent 3D printer on the ISS.

After that, some other companies announced the production of similar machines.

The advantage of the Russian 3D printer, which is to travel to space in 2021, will be a more advanced module system that allows for the modernisation and repair of equipment, said the authors of the item, researchers from the Tomsk Polytechnic University.

Thus, when moving from simple plastics to ultra-constructional and compositional materials, engineers won’t have to manufacture a new printer and ship it again to the ISS, like our American colleagues are now doing.

“The final work is now underway to prepare a 3D printer model. There are serious requirements for the equipment that is sent to the ISS, regarding its resistance to mechanics, climate, load, etc. Also, it is important to make sure that the printer is safe for cosmonauts. All of this is being tested now – a number of tests and inspections are currently underway. Separately, the software, which is made specially for this printer, is being upgraded”, shared Vasily Fyodorov, the head of the R&D and manufacturing laboratory “Modern manufacturing technologies”.

The opportunities of 3D printing have rendered it possible for scientists at Samara University to create a unique ultralight optics system with diffraction optics for nanosatellites. It will be the world’s first lens with diffraction optics to travel to space, the researchers said.
At the core of the optics system is a flat diffraction lens, developed at the university, which boasts unique characteristics. A camera lens based on it can replace the whole system of lenses used in television cameras and is distinguished by its light weight (less than 100 g, including the optics part) and small size.

For the lens, researchers have developed an innovative frame with a bionic shape that has been calculated so that it is possible to diminish the weight while preserving the same hardness.

The component, which is elaborate in terms of shape and inner structure, was designed by means of 3D printing with an SLM 280HL selective laser melting machine.

As per the scientists, in order to minimise the weight of the component, special porous parts were added to its inner structure during its topological optimisation.

The size of the component is 70×80×100mm. The use of additive technologies helped to reduce its weight by roughly 40 percent compared to a similar component manufactured the conventional way.

“The frame of the camera lens is made of AlSi10M aluminium alloy powder. The Russian-manufactured alloy is well-known both in Russia and abroad. As is known, in the space and aviation industries, weight is the major characteristic, and there is continuous work being done to reduce this measure”, Vitaly Smelov, an academic at the Department of Engine Manufacturing Technologies at Samara University, shared.

The scientists conducted a multistage topological optimisation of the original construction, finally arriving at and analysing a few of its shapes.

“In partnership with CADFEM CIS experts in topological optimisation and additive technologies, we have conducted a massive bulk of work to design a new shape of the construction, which will meet all current requirements of aerospace companies around the world”, recounted Samara University academic Anton Agapovichev.

The cost of analogous items like the camera lens for the CubeSat Gecko Imager is 23,000 euros. The scientists say their optics system will be much cheaper.

Project 5-100, which is being carried out as part of the national project “Education”, is aimed at boosting Russian universities’ research and development potential and their competiveness on the global educational market.