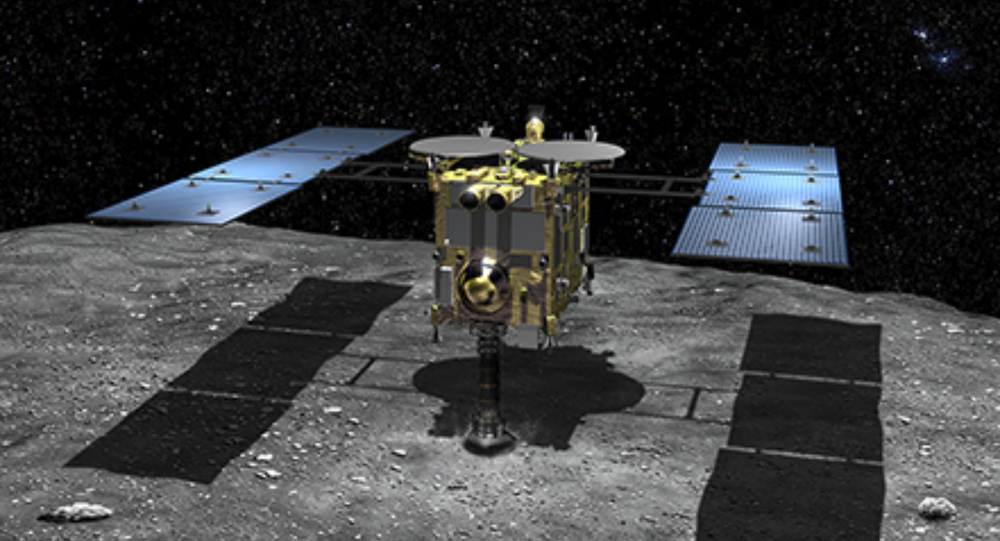 Soil Samples From Asteroid Ruygu May Reveal Secrets of the Universe, Say Scientists

The celestial body orbits the Sun every 16 months at a distance of up to 131 million miles. For more than a year it was examined by the space probe Hayabusa2, launched by the Japanese space agency JAXA in 2014.

Astrophysicists around the world are anxiously awaiting the arrival of soil samples from the asteroid Ruygu, which scientists say may answer the most important questions about the universe and our planet. In particular, the tiny grains of soil may solve the mystery of how water appeared on Earth.

"Asteroids are the leftover building blocks from the formation of our solar system 4.6 billion years ago, and that makes them very important to science. If you want to know what the planet was initially made of, you need to study asteroids", said Martin Lee, professor of planetary science at Glasgow University.

Professor Lee and his colleagues will be the first group of scientists in the world given samples from Ruygu.

It is still unclear exactly how many samples the Hayabusa2 space probe managed to collect (its predecessor suffered numerous technical problems and collected very little material), but researchers are confident that with the help of a device called an atom probe they will be able to get results from the grains of material, which are just a few millimetres in diameter. The device will help identify individual atoms in the specks of soil.

"Essentially, we will take a piece of soil and ablate its outer surface with a laser. In other words, we will blast off its atoms, one by one. And then each of these atoms will be measured to determine the identity of that element and its particular isotope. We will also be able to reconstruct exactly where the atom was positioned in the sample, so we will get a three-dimensional image of the atomic structure of our sample", said Professor Lee.

The Water Mystery and Other Secrets

It is well-known that water is a prerequisite for life. Seventy percent of our planet is covered by water and up to 60 percent of the human body is H2O, but how it ended up on Earth is still a mystery for scientists, because when the Solar System formed, the planets were too hot to sustain ice.

According to one hypothesis, water was brought to our planet by icy asteroids and comets that pummeled the Earth for a long time.

An examination of the comet 67P/Churyumov–Gerasimenko conducted between 2014 and 2016 revealed that the celestial body has water, but it's different from that found on our planet as it has levels of deuterium, an isotope of hydrogen. This led many astrophysicists to believe that water could have been on our planet since its formation.

"However, it may be that these ancient comets have not been the only source of water from elsewhere in the Solar System and more recent reservoirs have been created by the solar wind battering rocks on asteroids", said Professor Lee. "Water created there might have lower levels of deuterium, and that would explain how our oceans came to contain water with a different isotope signature. And, of course, studying the atoms from the rocks of asteroid Ryugu, which has been battered by the solar wind for billions of years, may well give us the answer".

Scientists say they expect the samples from Ruygu will solve other puzzles that have baffled astronomers for decades, one of them being what happens to space rocks when they are constantly bombarded with solar wind. Unlike our planet, asteroids and other celestial bodies don't possess a magnetic field and atmosphere.

"This bombardment may be triggering the creation of water on asteroids, protons are, essentially, hydrogen ions and could be reacting with oxygen in rocks to create water molecules", said Luke Daly, a member of the Glasgow University team.

Researchers say the Hayabusa2 probe will release a capsule with the soil samples in the coming days. If all goes well the capsule will safely parachute to the Woomera test range in Australia on 6 December.