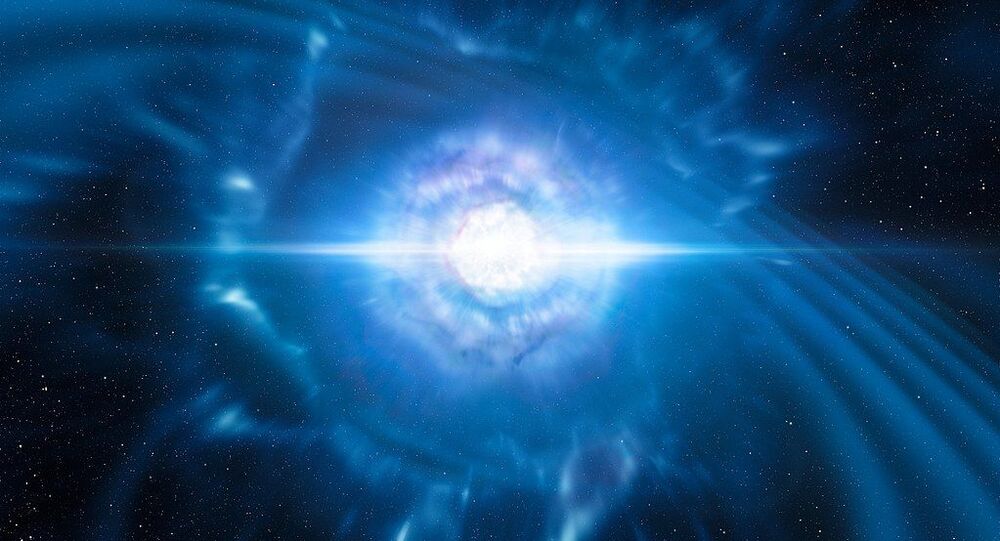 Birth of Rare Magnetar Possibly Spotted Due to Blinding Flash 5.5 Billion Light-Years Away

Three years ago, history was made as astronomers detected for the first time a collision of neutron stars thanks to the LIGO-Virgo gravitational wave detectors, as two dead celestial bodies came together in a bright flash of gamma-radiation, preceded by rippling gravitational waves.

Astronomers believe they have captured the instant when two dense neutron stars collided in an astronomical event called a kilonova to form a strange magnetic star.

A broad range of telescopes caught a tell-tale blinding flash of a short gamma-ray burst 5.5 billion light-years away, reminiscent of the kilonova explosion linked with the 2017 neutron star collision detected in a historic astronomical breakthrough.

Prof. Wen-fai Fong: "It is possible that a small fraction [of magnetars] form in neutron star mergers. We have never seen evidence of that before, let alone in infrared light, making this discovery special." Learn more: https://t.co/3q10L0beKX. View: https://t.co/cGu6dSSymd

​However, according to research that has been accepted into The Astrophysical Journal and is available on arXiv, there was something about the current kilonova accompanying the gamma-ray burst, dubbed GRB 200522A, that was very unusual.

Observations showed the flash included around ten-times more infrared light than predicted, with the research suggesting the collision produced something quite unexpected.

The flash had been captured in near-infrared wavelengths by the Hubble Space Telescope.

"These observations do not fit traditional explanations for short gamma-ray bursts. Given what we know about the radio and X-rays from this blast, it just doesn't match up. The near-infrared emission that we're finding with Hubble is way too bright," said astronomer Wen-fai Fong of Northwestern University, who led the study.

The astronomers were alerted to the possibility of the vent by NASA's Neil Gehrels Swift Observatory, a space telescope designed to be able to detect gamma-ray bursts early, with its Burst Alert Telescope.

After that initial warning, other space and terrestrial telescopes, such as The Very Large Array, the W.M. Keck Observatory, and the Las Cumbres Observatory Global Telescope network zoomed in on the location.

They obtained an electromagnetic profile of the event from radio wavelengths to X-rays, to show it was a short gamma-ray burst associated with merging neutron stars.It was the Hubble Space Telescope, observing the event in near-infrared, that made astronomers realize a new phenomenon was occurring.

"As the data were coming in, we were forming a picture of the mechanism that was producing the light we were seeing," said astronomer Tanmoy Laskar of the University of Bath in the UK.

He added that the scientists then had to step away from “conventional thinking” to figure out “what that meant for the physics behind these extremely energetic explosions."

Magnetars are a type of neutron star that possess extremely powerful magnetic fields, around 1,000 times that of an average neutron star.

Only 24 have been confirmed, to date, in our own galaxy, the Milky Way.

"We know that magnetars exist because we see them in our galaxy. We think most of them are formed in the explosive deaths of massive stars, leaving these highly magnetised neutron stars behind. However, it is possible that a small fraction form in neutron star mergers. We have never seen evidence of that before, let alone in infrared light, making this discovery special," said Wen-fai Fong.

If the bright burst witnessed by Hubble came from a magnetar that ejected energy into the kilonova material, in a few years, the ejected material will produce light observable on radio wavelengths. Accordingly, follow-up radio observations may prove that this was a magnetar.

Back in 2017 the historic first detection of a collision between two neutron stars, 130 million light-years away, in an event dubbed GW 170817, was hailed as a breakthrough only possible due to gravitational wave astronomy.

One year ago today astronomers announced they had detected the gravitational waves blasting out from a colossal collision between two neutron stars! This was a major, major discovery.https://t.co/ieP2TJtWLP pic.twitter.com/vEjC4erO6M

​The latter had identified the event and alerted observatories, pinpointing the area to watch. This was only the fifth gravitational wave detection, with the previous four detections from mergers between binary black holes, uniting to form a big black hole.

© AP Photo / Andrew Harnik
visual of gravitational waves from two converging black holes is depicted on a monitor behind Laser Interferometer Gravitational-Wave Observatory (LIGO) Co-Founder Kip Thorne as he speaks to members of the media following a news conference at the National Press Club in Washington, Thursday, Feb. 11, 2016

While previously there were only two detectors of gravitational waves, the LIGO interferometers in Livingston, Louisiana and Hanford, Washington, the addition of a third - Virgo's interferometer in Italy, boosted location accuracy.

Now, a magnitude of data across diverse signals is conducive in helping astronomers better understand these events.