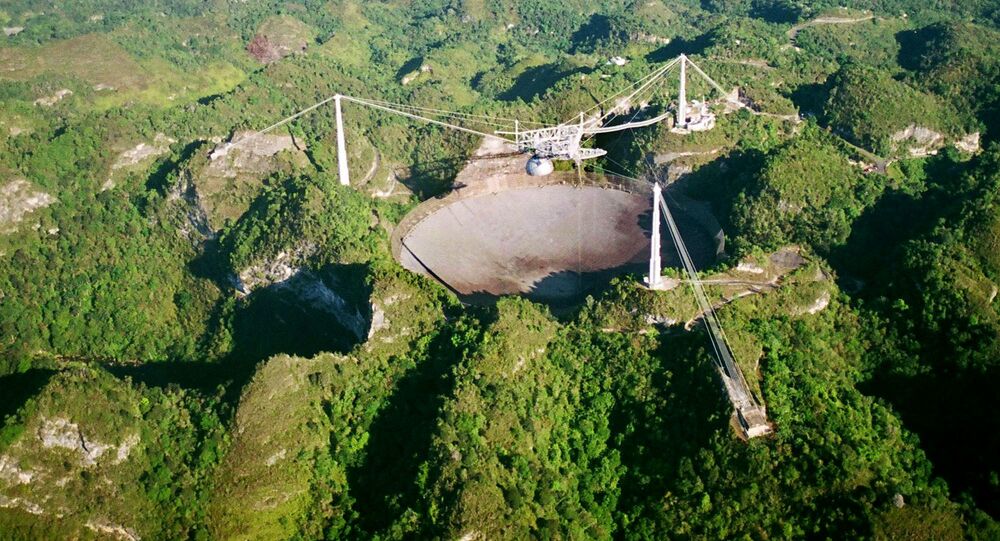 Located in Puerto Rico, it has contributed to countless scientific studies in areas such as gravitational waves, asteroid characterisation, planetary exploration, and more. In 1974, scientists sent a binary-coded message to the M13 cluster, which contains several hundred thousand stars, in an attempt to contact extraterrestrial civilisations.

The Arecibo Observatory, home to one of the most powerful radio telescopes in the world, has suffered another malfunction. It seems the year 2020 has not only been bad for people, as this is also the third setback for the observatory – first it was struck by earthquakes, then an auxiliary cable slipped out of its socket and crashed into its reflector panels leaving a huge gash, and now the main cable is broken.
According to a statement released by the University of Central Florida, which manages the observatory, the incident occurred on 6 November, with the cable then falling down onto the reflector dish below, causing additional damage to the dish itself and other cables.

"This is certainly not what we wanted to see, but the important thing is that no one got hurt", said Francisco Cordova, the director of the observatory.

Officials are now trying to establish the cause of the incident, but they suspect the cable could have broken due to the extra load it endured after the August breakage, which still hasn’t been fixed.

Commenting on why officials have been unable to repair the cable that broke during the summer, the university said the following:

"Since the August incident, engineers have been working to determine the cause of the initial failure and to create temporary and long-term repair plans. Because there was no obvious cause for the break, the complexities of such a large and unique structure that was built in the 1960s, and the need to prioritize safety above all else, the development of a temporary emergency repair plan has taken some time. Implementation of the first repairs was scheduled to begin this coming week".

Since its completion in 1963, the Arecibo Observatory has been used by scientists across the world. In 1974, two American astrophysicists, Russel Hulse and Joseph Taylor Jr., discovered the first binary pulsar - for which they were awarded the Nobel Prize in Physics.

The powerful radio telescope has contributed to numerous other important studies and major scientific breakthroughs. Also in 1974, scientists used the telescope to send a binary-coded message carrying basic information about humanity to the M13 cluster, containing several hundred thousand stars, in an attempt to contact extraterrestrial civilisations. The stars are located 25,000 light-years away. The Arecibo Observatory has not received any answer so far, but who knows, maybe 2020 is preparing yet another surprise for us...

'UFO Hiding in Cloud' Spotted by Alien Hunter in Philippines