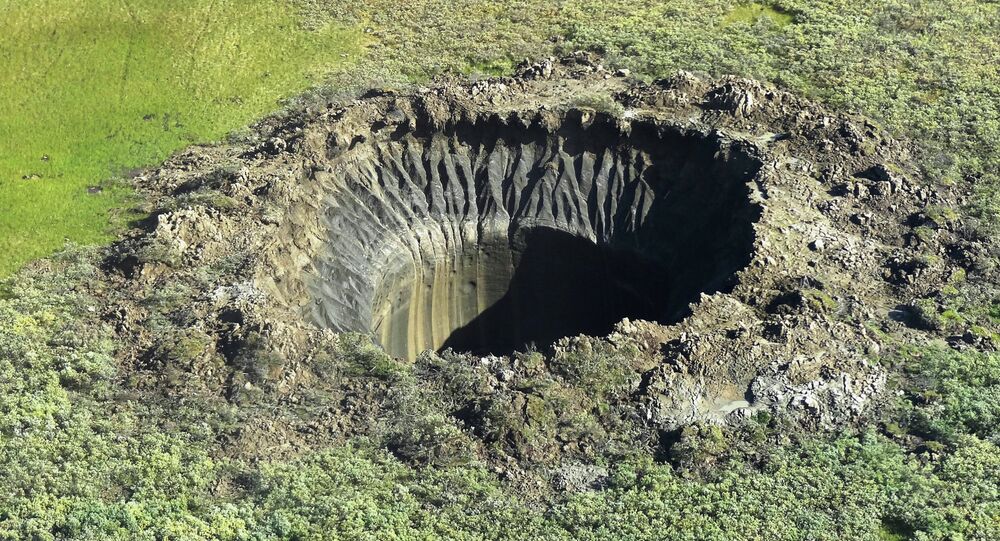 After a giant crater was discovered on the Yamal Peninsula south of the Kara Sea in the Russian Arctic in 2014, it rapidly became world famous as the Yamal crater, sparking a plethora of hypotheses to explain the formation of these craters, including a hit by a meteorite or a UFO.

Scientists are warning that climate change and melting permafrost in Siberia are triggering dangerous craters across the icy tundra on the Yamal and Gydan peninsulas.

According to a special database, the areas considered the most dangerous are north and south Tambey near the town of Sabetta and the Seyakha area.

According to siberiantimes.com, the craters are exploded pingos – the result of an upheaval generated by the buildup of methane gas in thawed pockets of permafrost under the surface.

When the pressure reaches its limit, the pingos explode, hurling ice and soil together with methane gas.

Seventeen more fresh craters are said to have been identified on the Yamal and Gydan peninsulas since the first one, the famous Yamal crater known as C1 which first launched the history of observations of this phenomenon in summer 2014.

That explosion sent material almost three thousand feet (900 metres) into the air, leaving a crater about eighty-two feet (25 metres) in diameter and about one hundred and sixty four feet (80 metres) deep.

The most recent pingo is suggested as having appeared earlier this summer, and is currently 31 metres (102 ft) deep, although scientists believe that it was about 40 metres (131 ft) deep at the moment of eruption.

“It was in our database as one of 7,185 permafrost heave mounds on the Yamal and Gydan peninsula… Five to six per cent of them are really dangerous,” said Professor Vasily Bogoyavlensky of the Russian Oil and Gas Research Institute in Moscow upon returning from a scientific expedition to study the erupted mound.

Professor Bogoyavlensky has been urging that scientists look for ways to release the pent-up gas before an explosion occurs.

New giant 50-metre deep crater found in Yamal peninsula, Russia. Such funnels are believed to be caused by the build up of methane gas in pockets of thawing permafrost under the surface.

​The expert has suggested that while pumping the gas out slowly might be a way to solve the issue, it could be dangerous if carried out without due experience.

A pingo is defined scientifically as “formed when water, rising by hydraulic pressure through gaps in the permafrost, freezes and uplifts a mound of ice covered by a layer of alluvium”.

Cryospheric processes are suggested as being behind the phenomena, according to research by Sergey N. Buldovicz of Lomonosov Moscow State University, published at nature.com.

While not all pingos pose a danger, with some simply releasing gas, and caving in rather than bursting, the problem is that there is currently no method to differentiate between the mounds.

Pingos are believed to take years to build up the kind of pressure that might render them dangerous.
However, scientists caution that those on the Yamal peninsula are forming three times faster than in Northern Canada and Alaska.

Pingos! A team of researchers at UAF have been collaborating with artists to create a sculpture that simulates a pingo in Alaska’s Noatak National Preserve. This video shows the science behind the art https://t.co/qiJXxoPDN0

​There are about thirteen thousand pingos in Tuktoyaktuk, in the Northwest Territories in Canada, with Central Alaska having hundreds of pingos according to a paper published by G. William Holmes, David M. Hopkins, and Helen L. Foster for the United States Department of the Interior.