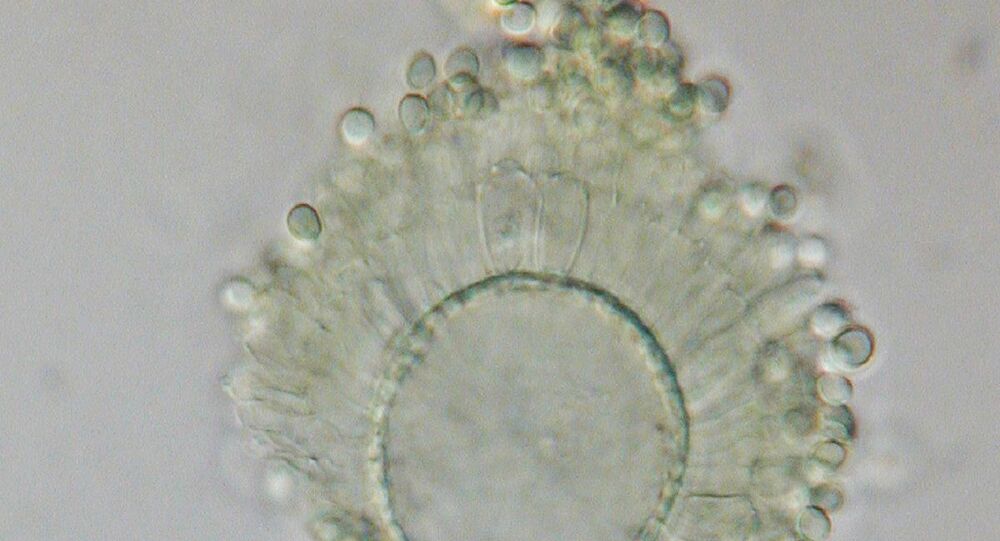 Scientists at the National Research Nuclear University MEPhI have come up with a simple, cheap, fast, sensitive and environmentally friendly method to determine if toxic aflatoxin-B1 is in food. The findings will help ensure food safety.

The study results were published in the Journal of Food Composition and Analysis.

Aflatoxin-B1 is a chemical compound which is toxic to humans and animals; it is secreted by some types of microscopic mould fungi. Aflatoxin-B1 causes malignant tumours (cancer) and hepatic cirrhosis; it also reduces immunity. Severe aflatoxin-B1 poisoning triggers cerebral edema and acute liver failure, which usually leads to death.

Aflatoxin-B1-secreting fungi are found in many foods: milk and dairy products, dried fruits, sunflower seeds, nuts, corn, peanuts, coffee, cocoa, cereals and spices. The excessive growth of these fungi, leading to dangerous concentrations of Aflatoxin-B1, is observed before and during harvest, as well as when the food is stored and processed. The largest possible quantity of Aflatoxin-B1 in food is subject to the law in different countries and ranges from 4 μg/L (Europe) to 20 μg/L (the US). Checking food for Aflatoxin-B1 is mandatory in Russia and other countries.

Aflatoxin-B1 has been actively studied since 1961, when it triggered a mass death of turkeys in England. Over several decades, many methods have been developed to determine this chemical compound. Today, liquid chromatography, enzyme immunoassay and photoelectrochemical biosensors are the most common methods to determine the presence of Aflatoxin-B1. MEPhI scientists have come up with a new method, which is no less accurate but simpler and cheaper. The new method’s other advantages include the investigated substance’s high Aflatoxin-B1enrichment factor, minimal use of organic solvents and its minimal effect on the optical properties of the complex.

“At the first stage, we use zinc ion to bind Aflatoxin-B1 to fluorescein. Then we create vortexes in the solution to isolate a sufficient concentration of the formed compound to study its optical spectra. This allows us to determine Aflatoxin-B1 in food samples. The new method is several times more productive and cheaper than others. It is sensitive to Aflatoxin-B1 at a concentration of 3 μg/L, which is below the legislatively established largest possible quantity,” Konstantin Katin, associate professor at the Institute for Nanotechnology in Electronics, Spintronics and Photonics of MEPhI, said.

According to scientists, modelling methods have played a huge role, making it possible to reduce the number of experiments by several times and interpret the experimentally-obtained results. The scientists have abandoned sequentially selecting the best experimental conditions, where at each stage the value of a single variable is optimised (solution pH, zinc concentration, solvent volume, concentration of chelating solution, solution swirling time). Instead, they simultaneously changed all the variables in a mathematical model that considers the variables’ interdependencies, highlighting the most important ones. This has made it possible to optimise the value of five parameters, having conducted only 46 experiments under different conditions.

Moreover, quantum-chemical calculations have been used to select suitable chemical agents, which made it possible to predict in advance the Aflatoxin-B1-zinc ion-fluorescein complex’s efficiency and calculate its structural, electronic, and optical characteristics.

The results obtained help ensure food safety. The experimental part of the study was carried out in Turkey, while the theoretical part was conducted in Russia. The study focused on the Turkish food industry’s needs: the method was tested on raw and roasted hazelnuts, raisins and dried figs. Turkey is the world’s largest producer of these products and is therefore most interested in the study results. However, the method can also be useful to other countries producing or purchasing food.

The study shows that theoretical quantum-chemical methods developed at MEPhI prove to be useful for applied research in the interests of the food industry. The scientists want to continue research to modernise food safety control systems in different countries.