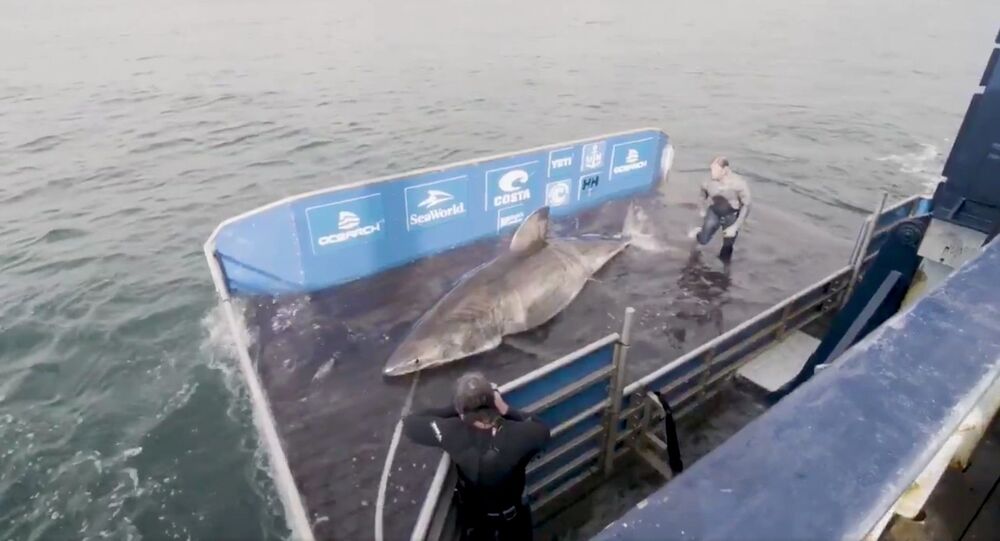 A massive, female great white shark estimated to be more than 50 years old was recently discovered and tagged in the waters off Canada’s Nova Scotia by explorers working with nonprofit research group OCEARCH.

Measuring in at a whopping 17 feet and 2 inches with a weight of 3,541 pounds, Nukumi is considered to be the largest great white that the organization has managed to tag in the Northwest Atlantic since its operations began in the region in 2012.

A fact-sheet from the Smithsonian Institution states that on average, female white sharks measure between 15 feet and 16 feet long.

Officials involved in the Friday exploration opted to name the shark Nukumi after “the legendary wise old grandmother figure of the Native American Mi’kmaq people,” OCEARCH noted in a Facebook post. The Mi’kmaq people are a First Nations tribe that is indigenous to what is now known as Canada’s Maritime Provinces, including Nova Scotia.

Chris Fischer, the leader of the expedition, described the shark to McClatchy News’ Miami Herald as “a very old creature, a proper Queen of the Ocean and a matriarch.”

“[Nukumi] has all the scars, healed wounds and discolorations that tell a deep, rich story of her life going back years,” Fischer said. “You feel different when you’re standing beside a shark of that size compared to the ones in the 2,000-pound range.”

“It’s an emotional, humbling experience that can make you feel small. You feel insignificant standing next to such an ancient animal,” he added.

Initial tests found that Nukumi’s diet most recently consisted of seals, which didn’t go down without a fight, as scarring on the shark’s face indicates.

“She was full of multiple seals and was round and robust,” Fischer said. “She had a lot of scratches on her face from seals that were fighting with their claws when she was eating them.”

Before being released back into the chilly Atlantic waters, Nukumi was fitted with three tags, one of which will track her movements for the next five years, while another will report back to researchers the depths at which the shark will swim at any given time.

At present, the research group is tracking about 60 great white sharks that were tagged in the Northwest Atlantic.