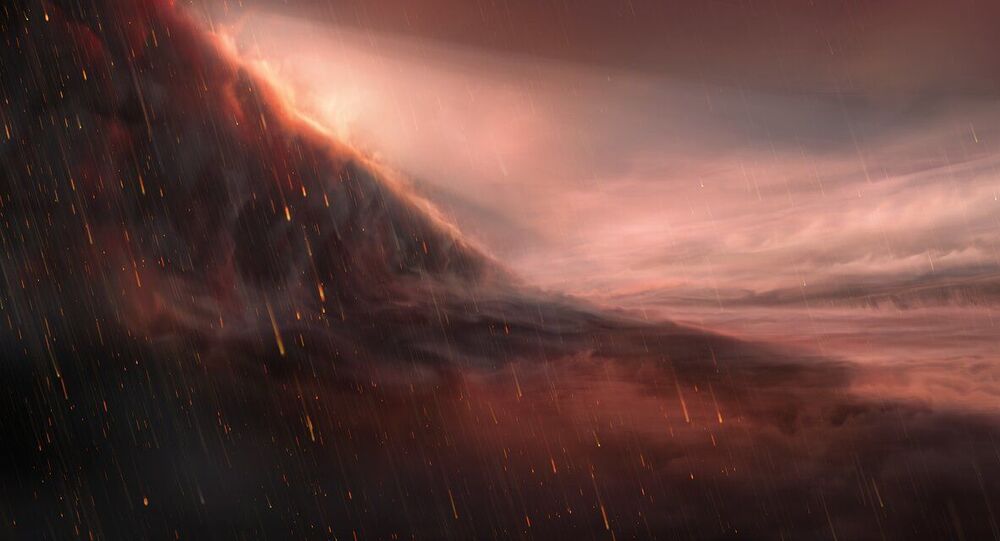 The brightly glowing planet, dubbed an “ultra-hot Jupiter” due to its massive size, is remarkable for its ultra-high surface temperatures capable of instantly turning metals into gas.

The ESA’s CHEOPS (CHaracterising ExOPlanet Satellite) mission has made a profound observation of a record hot exoplanet – a gas giant named WASP-189b, discovered back in 2018 and found to be orbiting the 730-million-year-old A-type star  WASP-189. The findings are now set to be reviewed and will then be published in the journal Astronomy & Astrophysics.

“The WASP-189 planetary system is located 322 light-years away in the constellation of Libra”, Dr Monika Lendl, an astronomer at the University of Geneva, commented on the planet, whose scorching temperatures can turn solid iron into a gas – a fact that makes the exoplanet “the most extreme” one ever discovered.

What was dubbed an "ultra-hot Jupiter" during the mission, which launched in December 2019, is remarkable for its super-high temperatures – up to 3,200 degrees Celsius (5,792 degrees Fahrenheit) – because it orbits really close to its host star, 20 times than Earth travels around the Sun.

Its host star, known as HD 133112, is notably about 2,000 degrees Celsius (3,600 degrees Fahrenheit) hotter than our Sun, making the glowing blueish body one of the hottest stars ever known to the scientific community that still has a planetary system around it.

“Only a handful of planets are known to exist around stars this hot, and this system is by far the brightest”, Lendl remarked.

As the European space agency’s mission watched the planet disappear behind its star (an occultation) before popping up again to then cross in front of it (a transit), the research team managed to figure out many of the planet’s intrinsic characteristics, including its brightness, temperature, etc.

“We also saw that the star itself is interesting — it’s not perfectly round, but larger and cooler at its equator than at the poles, making the poles of the star appear brighter”, Dr Lendl said, noting the body is spinning at such a break-neck speed that it’s being pulled “pulled outwards at its equator”.

The researcher says that adding to the overall asymmetry is the fact that WASP-189b’s orbit is inclined – “it doesn’t travel around the equator, but passes close to the star’s poles”.

CHEOPS is now readying to zero in on an observation of myriads of other exoplanets – those beyond the boundaries of the much-combed-through Solar System, which may one day serve as home for mankind.