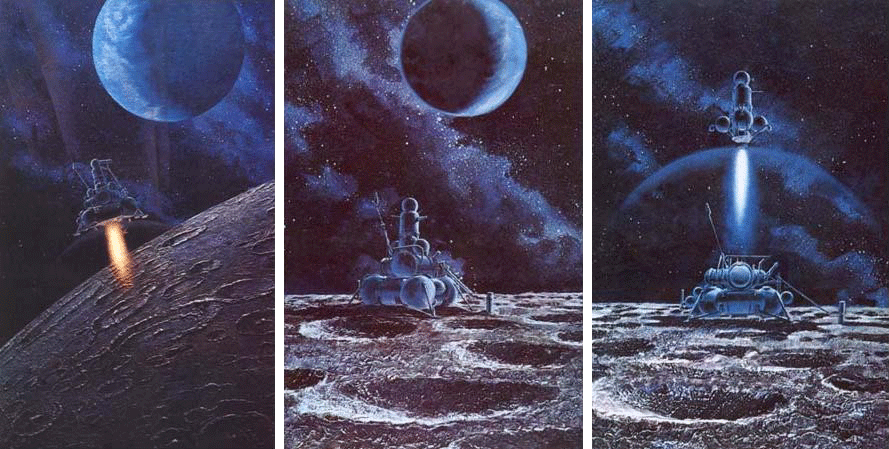 Although never realized, the Soviet programme to land human beings on the Moon was arguably far more ambitious and forward-looking than NASA’s Apollo programme, envisioning not just manned exploration activities, but the creation of permanent colonies and automated scientific outposts on the Earth satellite’s surface.

The Russian space agency has released a trove of information on the Soviet lunar programme, with the release, dedicated to the 50th anniversary of the success of the Luna 16 robotic probe’s soil-gathering mission, featuring never-before-seen documents, illustrations, photos, schematics and video footage.

Among the nearly four dozen documents released is an ambitious plan to establish the first manned base on the Moon. The creation of the eight-tonne facility, designed to accommodate up to three cosmonauts for a period of 20 days, was approved by Yuri Mozzhorin, the legendary director of the Moscow-based TSNIIMash rocket and spacecraft design and research bureau.

The 16 page document, dated the 19th of June, 1967, specifies that the first inhabitable bases would be temporary in nature, designed to provide scientists with data on cosmonauts' research activities in lunar conditions, and to allow the latter to literally prepare for the groundwork for the landing of larger, long-term stations, as well as work on the upkeep of automated facilities.

The document envisioned the launching of components of this Moon base in 1973.

The archives also reveal Soviet plans for a permanent, Moon-based astronomical observatory, with the technical opportunity for doing so expected to be reached by the year 1968 or 1969, and the station intended to carry out comprehensive analyses of the Sun, the Earth, other planets and stars. The proposal points to the Moon’s status as a stable platform for space-based observations, with almost any space-based object clearly observable over a 14 day period, and clear visibility provided for by the Moon’s lack of an atmosphere.

According to plans, the observatory was to be built on the basis of a modified E-8 lunar station, and launched to the Earth satellite by a Proton-K launch vehicle.

The USSR achieved a number of successes in the race to the Moon, with the Luna 3 probe taking the first photographs of its far side in 1959. Later, in 1966, the Luna 9 became the first manmade object to land on the Moon, and in 1970, the Luna 16 robotic probe landed and returned a sample of lunar soil to Earth. The same year, the Luna 17 deployed the Lunokhod 1 (‘Moonwalker-1’) robotic lunar rover, which traveled over 10 km and carried out a range of observations, returning over 20,000 TV images and over 200 high-res panoramic photos back to Earth. Several more orbiters and rovers would be landed on the Moon in the years that followed until 1976, with the Soviet space programme moving on to exploring Mars and Venus and building the world’s first permanent space stations.

However, Soviet plans to establish permanent inhabited bases on the Moon never came to fruition. Between 1969 and 1972, all four launches of the N-1 super-heavy launch vehicle from the Baikonur Cosmodrome ended in failure. The creation of the rocket was crucial to providing the dozens of tonnes of payload capacity which would be required to send manned missions and base components to the Moon.  In the meantime, NASA successfully landed men on the Moon in July 1969, and sent half-a-dozen more missions there before wrapping up its programme in December 1972.

In the mid-late 1980s, Soviet rocket scientists created a new super-heavy rocket: the Energia, with the massive rocket capable of taking 100,000 kg into low-Earth orbit, and launched successfully twice in 1987 and 1988, the second time carrying the Buran space shuttle. Like its N1 predecessor, the Energia was meant to launch spacecraft and other equipment for manned space exploration, including a planned mission to Mars. However, the collapse of the Soviet Union in 1991 froze these plans indefinitely.

In August, Roscosmos chief Dmitry Rogozin announced that Russia and China would soon start talks on the creation of a joint lunar base. At the moment, Russia plans to land its first cosmonauts on the Moon by 2030.

Earlier this month, Mikhail Sachkov, deputy director of the Russian Academy of Sciences’ Institute of Astronomy, told Sputnik that Russian and Chinese scientists were considering the possibility of building an ‘On-orbit-Assembling Space Telescope (OAST) on the Moon sometime after 2030.

NASA Looking For Private Company to Get Moon Samples