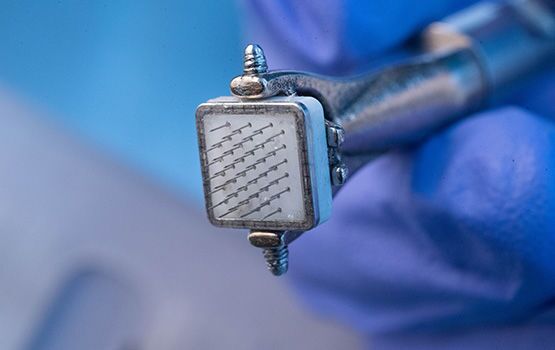 Australian university researchers have developed a world-first cortical implant: an electronic device that sits on the brain and can restore vision to people who have lost it.

Researchers at Monash University in Melbourne, Australia, announced earlier this week they had developed a vision-restoring cortical implant and are preparing for human trials.

The device comes out of 10 years of research driven by the Monash Vision Group, a collaborative partnership between Monash University and Melbourne’s Alfred Hospital.

According to a Monday news release, the Gennaris bionic eye is a 9-square-millimeter miniaturized wireless vision processor implant that sits on the surface of the brain, which receives data from custom-designed camera headgear. The device then turns the visual information into a series of electrical pulses that stimulate the brain so the user can see.

Michelle McFarlane
The cortical implant and microchip for the Gennaris Bionic Eye, a vision-restoring device developed at Australia's Monash University

“Further investigations have shown promise for this technology to deliver improved health outcomes to patients with otherwise untreatable neurological conditions, such as limb paralysis,” Monash said in the release. “Many people who are clinically blind have damaged optic nerves. These prevent signals being transmitted from the retina to the ‘vision center’ of the brain.”

“Cortical vision prostheses aim to restore visual perception to those who have lost vision by delivering electrical stimulation to the visual cortex – the region of the brain that receives, integrates and processes visual information,” Arthur Lowery, a professor in Monash’s Department of Electrical and Computer Systems Engineering, said in the release.

“Our design creates a visual pattern from combinations of up to 172 spots of light (phosphenes) which provides information for the individual to navigate indoor and outdoor environments, and recognize the presence of people and objects around them,” he continued.

Philip Lewis, another professor from the department, said if the trials are successful, the Monash Vision Group will “look to create a new commercial enterprise focused on providing vision to people with untreatable blindness and movement to the arms of people paralysed by quadriplegia, transforming their health care.”

The device’s first success was recorded in a paper published in the Journal of Neural Engineering in July, which detailed a successful 2,700-hour trial on sheep. Jeffrey Rosenfeld, a senior neurosurgeon at Alfred Hospital and lead author of the study, said it indicates that “long-term stimulation through wireless arrays can be achieved without induction of widespread tissue damage, nor visible behavioral issues or seizures resulting from the stimulation.”

The news comes on the heels of an announcement by industrialist Elon Musk in late August that his Neuralink project had yielded a coin-sized brain implant that promises to cure a variety of neurological and spinal problems, ranging from paralysis to memory loss and blindness. Musk characterized the device, which is not wireless, as like "a Fitbit in your skull with tiny wires."

Like the Monash project, the Neuralink device was tested on livestock first, and Musk’s demonstration included a live feed from the brains of several pigs brought to the press hall.

How Much is the Chip? Elon Musk Reveals Cost of Brain Implants Developed by His Company