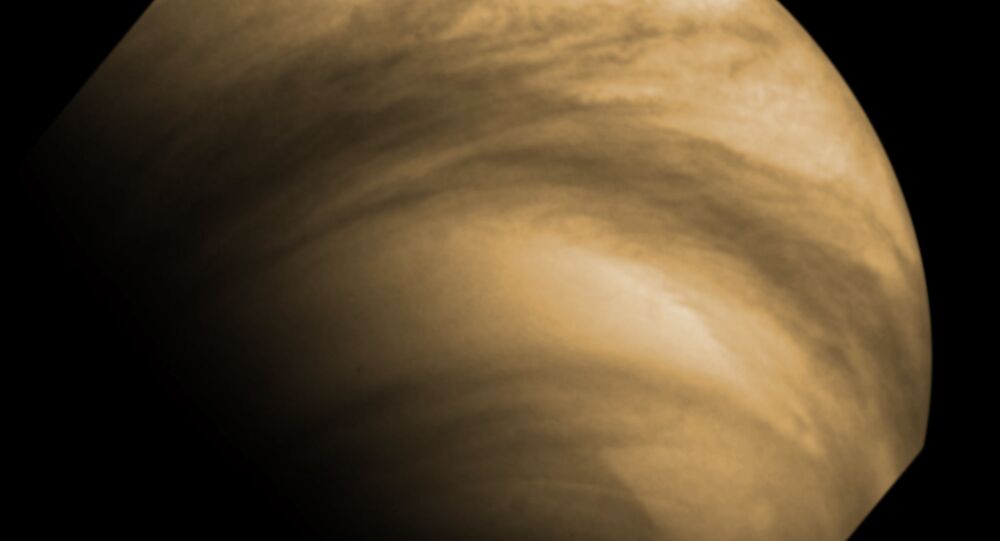 Venus’s toxic atmosphere, mostly made up of carbon dioxide coupled with droplets of sulphuric acid, appears to be hiding an incredible structure that comes and goes back into the planet’s atmospheric depths every five days.

Researchers have discovered a giant, hitherto unknown wall of cloud that circles around Venus - a planet known to be enveloped by super-thick carbon dioxide clouds. The results of the study, led by the Japanese space agency JAXA and physicist Javier Peralta, have been published in Geophysical Research Letters.

The phenomenal formation described in the press release as “a planet-wide cloud discontinuity” is estimated to be up to 7,500 kilometres (4,660 miles) long, stretching across the equator to both the north and south latitudes, at rather low altitudes of between 47.5 and 56.5 kilometres.

It has now been discovered that this wall of acid cloud has been regularly - every five days - sweeping through Venus since at least 1983 at about 328 kilometres per hour.

"If this happened on Earth, this would be a frontal surface at the scale of the planet", said astrophysicist Pedro Machado of the Institute of Astrophysics and Space Sciences in Portugal, adding the discovery is just “incredible”.

Venus’ cloudy atmosphere and its huge atmospheric pressure are known to be conditions that make the planet extremely prone to giant atmospheric waves: for instance, there is a bow-like structure about 10,000 kilometres long that regularly emerges in the upper atmosphere, deemed to be a stationary gravity wave.

© CC0
Bizarre Meteors That Once Struck Earth Could Be Parts of Mini-Planets, Researchers Assume

Another is a planet-encircling Y-shaped wave in the upper clouds, frequently reshaped by Venus' powerful winds. However, the new find is drastically different - it’s much deeper than any atmospheric wave ever seen on the planet, occurring in the cloud layer responsible for the greenhouse effect that leads to Venus’ surface being incredibly hot. However, researchers are yet to find out the likely cause of the newly detected formation.

"This atmospheric disruption is a new meteorological phenomenon, unseen on other planets. Because of this it is yet difficult to provide a confident physical interpretation", Peralta said.

The researchers believe that some of the detected features correspond to what is called nonlinear atmospheric Kelvin waves frequently found on Earth. These are large gravity waves trapped in the region of the equator and affected by the planet's rotation.

If the structure is indeed a Kelvin wave, it could yield interesting results, helping contemporary science to better understand the relationship between Venus' surface topography and the dynamics of its atmosphere, namely the planet’s so-called atmospheric super-rotation.