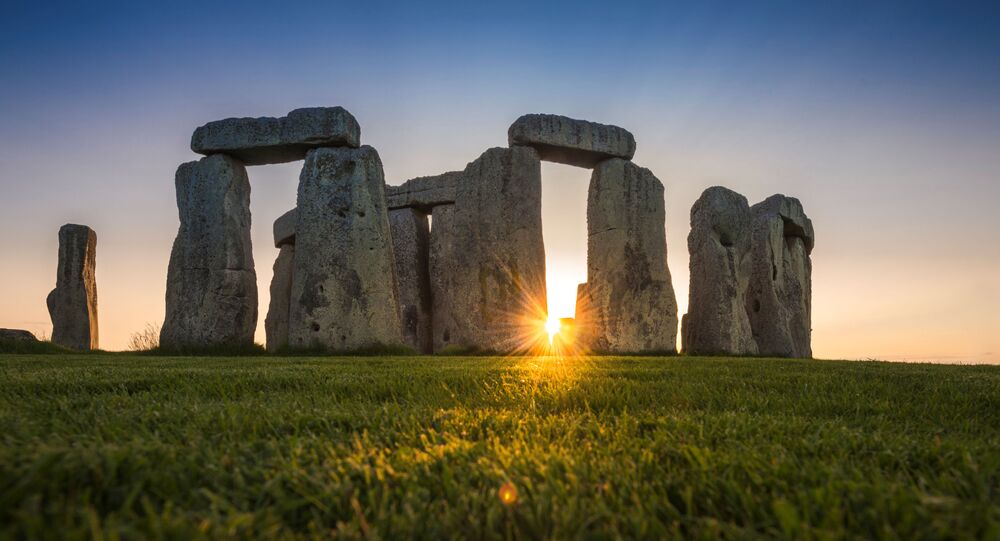 The origin of the ring of standing prehistoric stones known as the Stonehenge monument in Wiltshire, England, has been a mystery for visitors and scientists, as it is still unclear how the giant stones, the weight of which vary between 30 and 25 tons, appeared in their present location. A recent study offers a partial answer.

A new study by UK scientists, published on Wednesday in the journal Science Advances, reveals the origin of the world-famous Stonehenge megaliths that form the main 'architecture' of the monument, ending a longstanding mystery.

The scientists uncovered the secret of the giant stones, which are said to date back some 4,500 years, through conducting geochemical tests of a core sample of one of the pale-gray sandstone megaliths received from the United States where it had been stored for decades.

Comparing geochemical testing results of the pale-gray sandstone megaliths, known as sarsens, the study found that 50 out of the 52 stones forming the monument match the nature of stones at a site called West Woods on the edge of Wiltshire’s Marlborough Downs about 15 miles (25 km) away.

“The sarsen stones make up the iconic outer circle and central trilithon (two vertical stones supporting a horizontal stone) horseshoe at Stonehenge. They are enormous,” said leader of the study geomorphologist David Nash of the University of Brighton, cited by Reuters.

Although the research answered one of the key questions about the origin of the Stonehenge megaliths, Nash admitted that the team did not succeed in discovering how the huge sarsens, which vary between 3.9 and 9.1 metres in height and between 25 and 30 tons in weight, were transported to their current location in Wiltshire.

“How they were moved to the site is still really the subject of speculation,” the geomorphologist added. “Given the size of the stones, they must have either been dragged or moved on rollers to Stonehenge. We don’t know the exact route but at least we now have a starting point and an endpoint.”

Nash said that the sarsen core sample, which provided crucial information, was originally extracted in the late 1950s during conservation work when metal rods were inserted to support a cracked megalith.

The core was given to a conservation worker named Robert Phillips, a British national, who in 1977 emigrated to the US, taking the megalith piece with him, after receiving permission to do so.

In 2018, Phillips returned the sample to the UK for research purposes, before dying later that year, according to the research team.

“I hope that what we have found out,” Nash said, “will allow people to understand more about the enormous endeavor involved in constructing Stonehenge.”

A co-author of the study, Susan Greaney of the English Heritage charity, which manages over 400 historic monuments, buildings and sites across the UK, said that the discovery was “a real thrill”.

“To be able to pinpoint the area that Stonehenge's builders used to source their materials around 2,500 BC is a real thrill,” Greaney said, quoted by BBC. “While we had our suspicions that Stonehenge's sarsens came from the Marlborough Downs, we didn't know for sure, and with areas of sarsens across Wiltshire, the stones could have come from anywhere. They wanted the biggest, most substantial stones they could find and it made sense to get them from as nearby as possible”.

She added that the evidence highlights “just how carefully considered and deliberate the building of this phase of Stonehenge was”.

In February 2019, scientists traced the smaller “bluestones” near the center of the Stonehenge monument to a site in the Preseli Hills in West Wales.

Scientists Reveal How Stonehenge Could Have Been Built