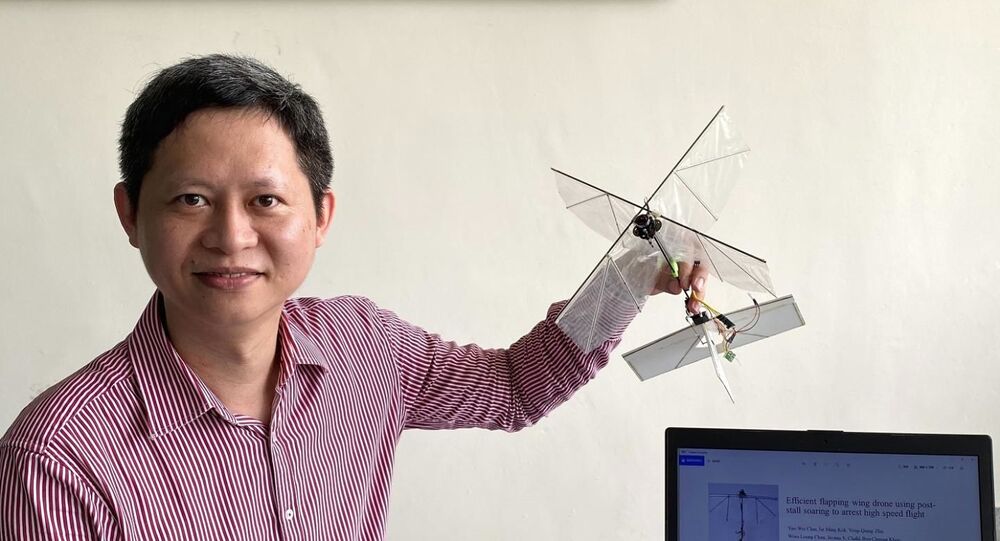 Weighing just 27.5 grams, the flapping drone has been designed to be the same size as a swift, the world’s fastest flying bird, or a large moth, in order for it to perform some aggressive bird flight manoeuvres. It can fly at a speed of 8 metres per second and lasts up to 8 minutes in the air on a single battery charge.

Engineers are currently developing a wing-flapping drone that can hover, dart, glide and dive which they hope will be used to monitor crowds and pollinate fields in the future.

A team from Singapore, Australia, China and Taiwan have designed an ornithopter (wing-flapping drone) to be able to fly in cluttered environments near humans with the ability to “glide, hover at a very low power, and stop quickly from fast speeds” to avoid collisions. These are functions that currently existing quadcopter drones can’t do.

Currently, there aren’t any commercialised ornithopters being used for surveillance, but the group behind this new design believes this could change. They claim that the new flapping drone will be able to carry a camera and could be used for crowd and traffic monitoring, information gathering and surveying forests and wildlife.

Dr. Yao-Wei Chin at Nanyang Technological University in Singapore, who led the project, said, “Unlike common quadcopters that are quite intrusive and not very agile, biologically-inspired drones could be used very successfully in a range of environments.”

“The light weight and the slow beating wings of the ornithopter poses less danger to the public than quadcopter drones in the event of a crash and given sufficient thrust and power banks it could be modified to carry different payloads depending on what is required,” Dr Chin said.

University of South Wales aerospace engineer, Professor Javaan Chahl said, “There are existing ornithopters that can fly forward and backward as well as circling and gliding, but until now they haven’t been able to hover or climb.”

He said that they have overcome this with their current prototype by improving its design.

Dr Chin however said that the team is a long way from replicating biological flight.

“Although ornithopters are the closest to biological flight with their flapping wing propulsion, birds and insects have multiple sets of muscles which enable them to fly incredibly fast, fold their wings, twist, open feather slots and save energy,” he said.

“Their wing agility allows them to turn their body in mid-air while still flapping at different speeds and angles... At most, I would say we are replicating 10 percent of biological flight.”

A paper outlining the research has been published in the journal Science Robotics.