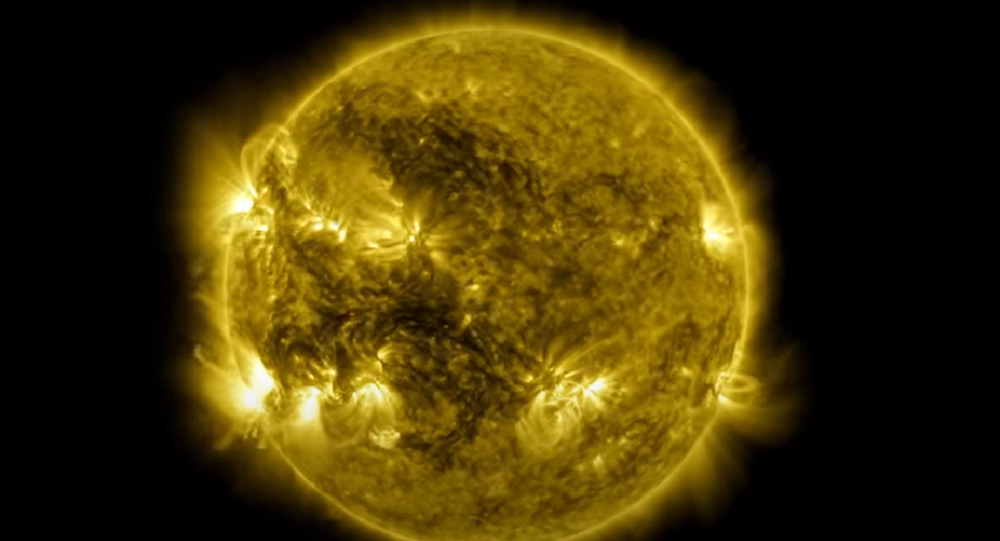 The Solar Orbiter satellite, a joint NASA and ESA (European Space Agency) mission, has sent back the first batch of images taken in mid-June during its initial close pass of the sun from a distance of 77 mln kilometres (48 mln miles).

As the media revels in astounding closest-ever images of the sun taken at 77m kilometres (48m miles) above the solar surface between the orbits of Venus and Mercury, the images beamed back by Solar Orbiter spacecraft have revealed that its surface is speckled with flickering beacons, spawning theories probing one of the most mysterious phenomena - the coronal heating, writes The European Space Agency portal.

The never-before seen campfires spotted by #SolarOrbiter Extreme Ultraviolet Imager (EUI) appear to be ubiquitous miniature eruptions on the Sun. Their nature is still under study, but it is possible they contribute to the coronal heating.#TheSunUpClosehttps://t.co/76gNWuq7te pic.twitter.com/5So7d5nxWJ

​The miniature solar flares, dubbed “campfires”, each spanning just a few hundred kilometres across and lasting minutes, are a phenomena previously not observable in such detail.

The first batch of stunning images are attributed to the Extreme Ultraviolet Imager (EUI), which takes high-resolution images of the lower layers of the Sun’s atmosphere, the solar corona, from Solar Orbiter’s first perihelion - the point in its elliptical orbit that is closest to the Sun.

​Commenting on the new phenomena observed in the images, David Berghmans of the Royal Observatory of Belgium (ROB), Principal Investigator of the EUI instrument, said:

“The campfires are little relatives of the solar flares that we can observe from Earth, million or billion times smaller. The Sun might look quiet at the first glance, but when we look in detail, we can see those miniature flares everywhere we look.”

The scientists are yet to determine just what exactly the “campfires” are, as they might be tiny versions of big flares, or attributed to other mechanisms.

“These campfires are totally insignificant each by themselves, but summing up their effect all over the Sun, they might be the dominant contribution to the heating of the solar corona,” said Frederic Auchere, of the Institut d'Astrophysique Spatiale (IAS), France, Co-Principal Investigator of EUI.

This mystery has baffled scientists for decades, as they ponder the physical mechanisms that heat the corona.

It is possible that the miniature flares could provide enough energy to heat up the Sun’s corona to its observed extreme temperature, yet further observations and analysis would be required to confirm this.

“It’s obviously way too early to tell but we hope that by connecting these observations with measurements from our other instruments that ‘feel’ the solar wind as it passes the spacecraft, we will eventually be able to answer some of these mysteries,” says Yannis Zouganelis, Solar Orbiter Deputy Project Scientist at ESA.

The observations were made in a batch of initial images beamed from the Solar Orbiter spacecraft, a joint NASA and European Space Agency (ESA) Sun-studying mission, and are touted as just a hint at things to come.

Are you ready to see #TheSunUpClose?

CALLING ALL MEDIA: We will reveal the first images taken by #SolarOrbiter, only 77 million km from the surface of the #Sun, during an online press briefing on 16 July 14:00 CEST / 13:00 BST.

“These are only the first images and we can already see interesting new phenomena. We didn’t really expect such great results right from the start. We can also see how our ten scientific instruments complement each other, providing a holistic picture of the Sun and the surrounding environment, said Daniel Muller, ESA’s Solar Orbiter Project Scientist.

“The first images are exceeding our expectations,” says Daniel Müller, ESA #SolarOrbiter Project Scientist. Join us for the press briefing on 16 July at 13:00 BST/14:00 CEST to see #TheSunUpClose

​Launched in February, the $1.3 bln mission is tasked with offering the first glimpses of the sun’s uncharted north and south poles, once the Solar Orbiter reaches a “vantage point” above the planetary plane late in 2021.