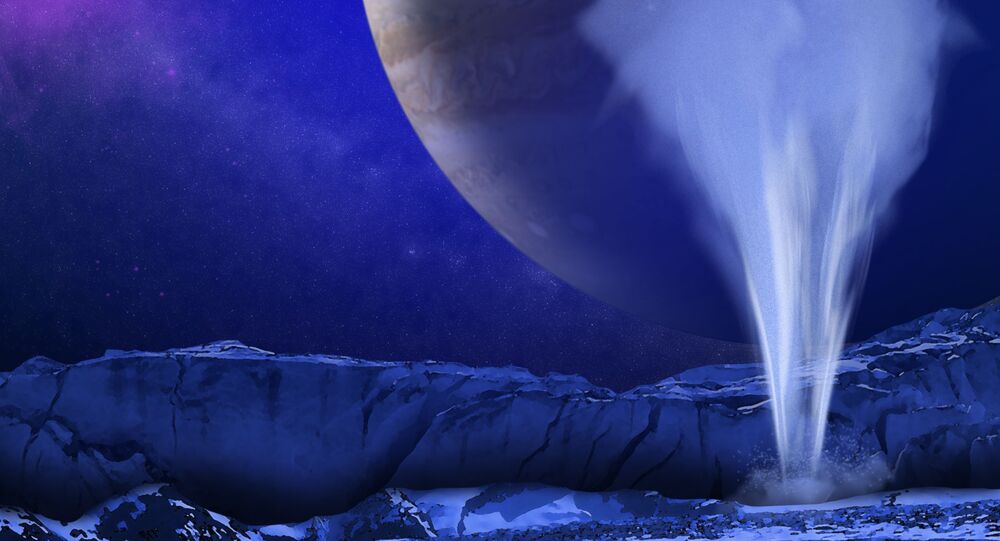 Despite all the data provided by researchers, it seems that a spacecraft mission to Europa would be necessary to determine whether the moon's ocean can “sustain a flow of electrons which might provide the energy to power life”.

NASA scientists have managed to obtain more evidence that the frozen oceans of one of Jupiter's moons, Europa, may actually harbour life, Universe Today reports.

According to the media outlet, the new research was presented at the annual Goldschmidt Conference this year, and is primarily based on the data supplied by Galileo mission which reached Jupiter back in 1995.

In their work, which is yet to undergo a peer review, M. Melwani Daswani and S. D. Vance from the Jet Propulsion Laboratory postulate that Europe's oceans formed endogenously, via "breakdown of water-containing minerals due to either tidal forces or radioactive decay".

"We were able to model the composition and physical properties of the core, silicate layer, and ocean", said Daswani, lead author of the study. "We find that different minerals lose water and volatiles at different depths and temperatures. We added up these volatiles that are estimated to have been lost from the interior, and found that they are consistent with the current ocean’s predicted mass, meaning that they are probably present in the ocean."

As Daswani explained, while originally "it was thought" that the ocean in question "could still be rather sulfuric", their "simulations, coupled with data from the Hubble Space Telescope, showing chloride on Europa’s surface, suggests that the water most likely became chloride rich".

"In other words, its composition became more like oceans on Earth. We believe that this ocean could be quite habitable for life," the scientist said.

However, Steve Mojzsis, Professor of Geology at the University of Colorado, who wasn't involved in the research, pointed out that it remains to be seen whether an ocean like the one on Europa can "sustain a flow of electrons which might provide the energy to power life", and as the media outlet notes, such question can only be answered by sending a spacecraft there.

"Europa is one of our best chances of finding life in our solar system. NASA’s Europa Clipper mission will launch in the next few years, and so our work aims to prepare for the mission, which will investigate Europa’s habitability", Daswani remarked.