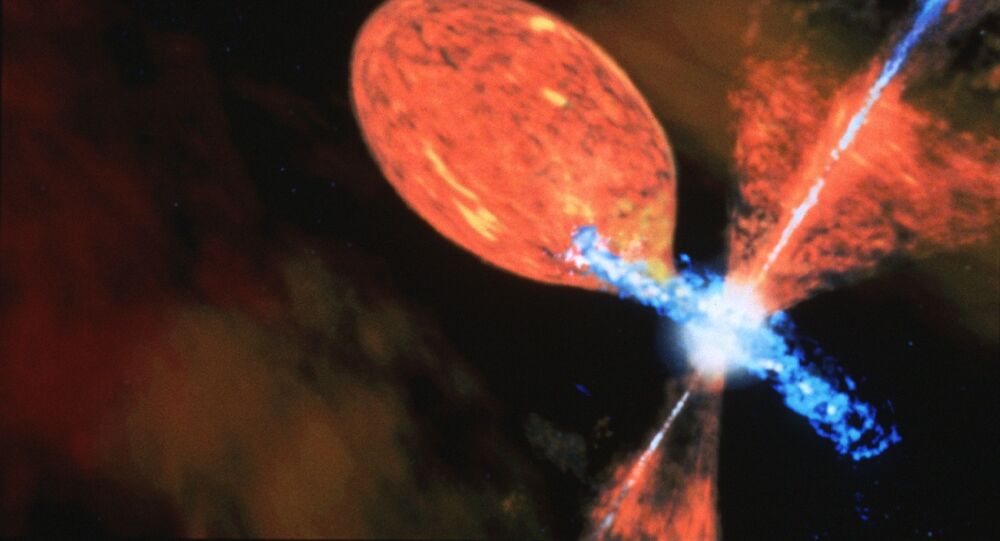 Symbiotic novae are a type of star systems, which can be composed of a red giant star emitting material towards a white dwarf, a process which eventually leads to a bright outburst. These objects are believed to be quite rare and exceptional by astronomers.

Astronomers from the National Institute of Astrophysics (INAF) used radio telescopes to observe a source of gamma rays resulting from an explosion at a symbiotic nova, according to a study published in Astronomy & Astrophysics.

In 2010, the Large Area Telescope on board the NASA satellite Fermi identified a gamma-ray emission which had potentially resulted from a symbiotic nova in the V407 Cyg system. Nothing like that had previously been observed by astronomers. The researchers then went on to find evidence indicating that it was indeed a peculiar double star system that was producing an explosive shock. Now, they have observed and provided detailed radio-band images capturing the event.

“Novae, with their sudden increases in visible light emission, have fascinated astronomers for centuries and their revelation in gamma rays has been a great surprise,” the study’s lead author Marcello Giroletti said, as quoted by Phys.org portal. “Having been able to witness, thanks to radio waves, not only the increase in brightness, but also the choreography produced by the interaction of these two stars is a very exciting result, and one of great scientific value.”

The observation campaign was carried out with a help of VLBI (Very Long Baseline Interferometry) technique, combining data from several radio telescopes located on the Earth, in Europe and the United States. The images are now made public through European Space Agency.

Array of radio telescopes reveals explosion on the surface of a hot dead star. The source of gamma rays was a rare objects known as symbiotic nova. The images were obtained from the observations by telescopes in Europe & the US.https://t.co/SwhejGbAjf pic.twitter.com/dAqlv2D6Zv

​Symbiotic novae are rare systems of variable double stars, often featuring a small white dwarf and a red giant star. The last one tends to emit a material towards its close orbit companion until this accumulation produces an explosion on the white dwarf’s surface. It was not known though that stellar systems like that could emit very high energy radiation before 2010.