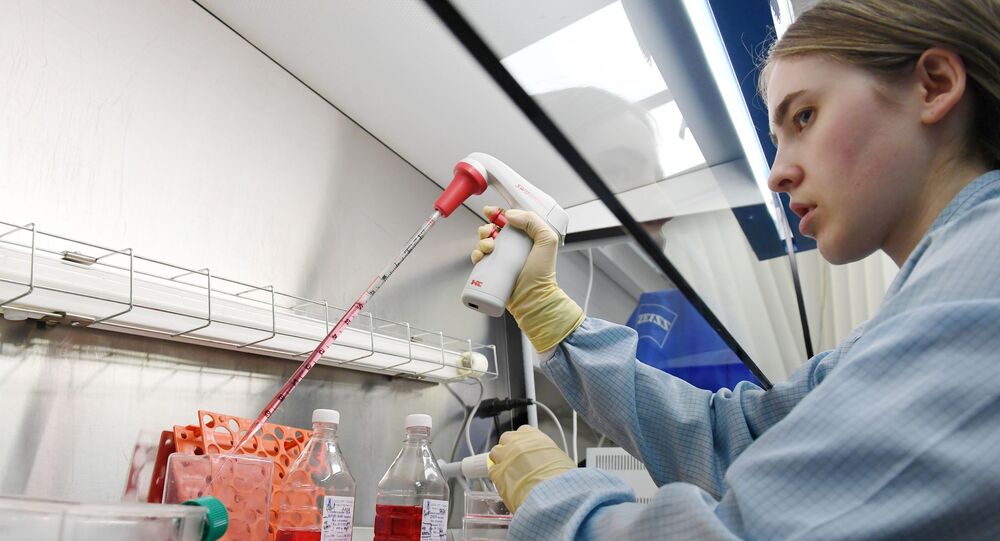 Russian Scientist: 'We Know Everything About COVID-19, but We Know Nothing About It'

Russian scientists have suggested a computer-based approach to search for pharmacological substances for use in Covid-19 treatment. This was discussed at an online meeting organised by the Ministry of Science and Higher Education of the Russian Federation, the Russian Academy of Sciences and the Scientific Russia portal.

The coronavirus situation is dramatically affecting all aspects of human life.

More than 19,000 works on SARS-CoV-2/COVID-19 have been published over the past five months.

“Unfortunately, many of these publications contradict each other. It’s sometimes hard to figure out how well one or another conclusions are justified,” Vladimir Poroykov, a corresponding member of the Russian Academy of Sciences, head of the Bioinformatics Department of Orekhovich Institute of Biomedical Chemistry, said.

At the same time, he believes that the world is witnessing an unprecedented speed of scientific discoveries in the field of fighting the coronavirus. On 25 January, the first genome was deciphered. Today, there are several thousand decrypted genomes, and the work is still ongoing.

On 5 February, the first three-dimensional enzyme structure was obtained, which made it possible to further apply molecular modelling methods to search for corresponding anti-COVID-19 drugs. Understanding the virus’s structure and life cycle allows us to identify the most promising targets.

“Despite the fact that we know everything about COVID-19, we know nothing about it,” the scientist pointed out, adding that many aspects of the virus’s interaction with the human body are still a mystery.

To give an example, the scientist cited a recent publication in The Lancet (one of the most famous medical journals) saying that using hydroxychloroquine and chloroquine (antimalarial drugs used to treat COVID-19) is not tenable.

The article collected extensive clinical material. However, a few days later, three of the article’s authors withdrew their names from it. “This example shows that the process is ongoing, and it is extremely controversial. We can evaluate many issues only post factum. But we cannot fight the virus post factum, we need to fight it now,” Vladimir Poroykov said.

“New” cure is long-forgotten old one

Due to the fact that it takes a lot of time to search and create vaccines, scientists are trying to reposition existing drugs. The first attempt to reposition a drug (Dipyridamole, a well-known antiplatelet agent) was made back in March when a computer programme showed that along with its antiplatelet effect, the drug inhibits the basic protease of the virus.

This was confirmed in vitro, and Chinese scientists immediately moved to the testing stage. Two large research teams conducted a systematic drug search. One found 13 active compounds, while another one found 64.

“The work was carried out in different test systems; none of the drugs intersected with each other. The two works are two different results. Obviously, such results require clarification,” the scientist said.

The Orekhovich Institute of Biomedical Chemistry made its own attempt at drug repositioning. One of the drugs (Neratinib) was identified as a possible inhibitor of the virus’s main protease. This has now to be proved experimentally.

When the pandemic broke out, the Grand Challenge Against Covid-19 project was launched in Europe. The project organisers proposed six targets; substances should be found for these targets using three independent computer methods with more than 1 billion accessible structures, including drugs approved for medical use.

Headed by Vladimir Poroykov, Russian scientists, who have been developing PASS computer programmes for more than 30 years and predict more than 5,000 types of biological activity, have chosen 4 targets: the main protease, papain protease, RNA-dependent protease and human membrane protease, which helps the virus penetrate into the cell.

“We have experience in working with Big Data: about a billion chemical compounds associated with a project at the US National Cancer Institute. For the research, we used three methods: similarity search, machine learning, and docking. The previous project showed that active compounds can be found with such methods,” the scientist said. At the stage of preparing the training samples, the scientists needed to conduct a bioinformatic analysis between different types of the virus and include substances from other types of viruses into these training samples.

During the research, Russian scientists concluded that the pharmacotherapy problem needs to be comprehensively analyzed – from training samples preparation and training a special information-computing system to selecting promising molecules based on forecasting and testing.

© REUTERS / JEENAH MOON
'It's Like a Wild Cat': Italian Expert Says COVID-19 Virus Has Weakened, May Go Away Without Vaccine
According to experts, to obtain reliable results when searching for new drugs, everything should be as coordinated as possible.

Currently, more than 32 thousand molecules that can potentially affect the target have been selected, a machine analysis has been carried out and several potential inhibitors have been selected, for which molecular modelling showed good interaction with the main protease of the virus.

“In the case of COVID-19, we had to create training samples from scratch. The forecasting programme for anti-coronavirus drugs is almost ready; we’ll provide the first results in the next month,” the scientist said.