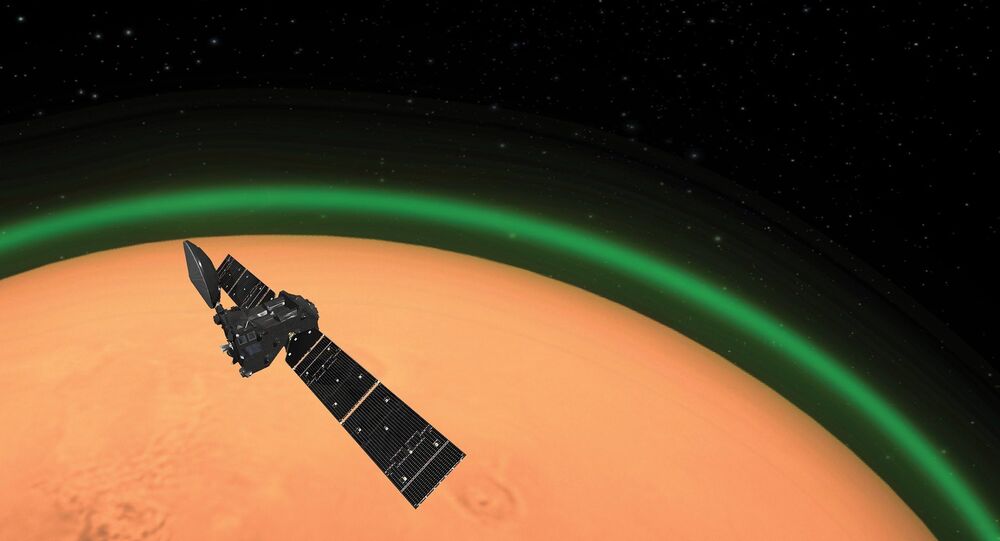 It has long been believed that our world is the only planet in the Solar System with an oxygen-based atmosphere, as there is a glowing green aura around the Earth formed by the combination of sunlight with oxygen atoms and atmospheric molecules. Similar emissions have now for the first time been spotted surrounding the Red Planet.

The European Space Agency’s ExoMars Trace Gas Orbiter (TGO), circling the planet since 2016, has detected a glowing green oxygen aura in the Martian atmosphere for the first time, the agency said in a Monday statement.

The emission ring, seen previously only around the Earth by astronauts aboard the International Space Station, occurs when sunlight combines with oxygen atoms and air molecules in the planet’s atmosphere.

Astronomers have for decades posited that a similar emission signature takes place in Mars’ atmosphere, but only now have they proved its presence.

“One of the brightest emissions seen on Earth stems from night glow. More specifically, from oxygen atoms emitting a particular wavelength of light that has never been seen around another planet,” said Jean-Claude Gerard of the Belgian University of Liege, and lead author of the new study published in Nature Astronomy. “However, this emission has been predicted to exist at Mars for around 40 years – and, thanks to TGO, we’ve found it”.

ESA's @ESA_TGO has detected glowing green oxygen in the martian atmosphere – similar to 'airglow' seen by astronauts from @Space_Station – but this the first time that this emission has been seen around a planet other than Earth 👉 https://t.co/tTg7oy4iQK (pic: artist impression) pic.twitter.com/X3TWzxRj5P

The glowing green oxygen aura was spotted by a special TGO tool known as NOMAD (Nadir and Occultation for Mars Discovery), as the orbiter circled the Red Planet in the period between April and December of 2019, according to the research team.

“Previous observations hadn’t captured any kind of green glow at Mars, so we decided to reorient the UVIS nadir channel to point at the ‘edge’ of Mars, similar to the perspective you see in images of Earth taken from the ISS,” said Ann Carine Vandaele of the Royal Belgian Institute for Space Aeronomy, co-author of the study and principal investigator for NOMAD.

The team asserts that further study is needed to uncover additional secrets of the Martian atmosphere, and necessarily suggest sending more satellites to Mars to expand our knowledge of our nearest planetary neighbor.

New Research Could Call Into Question Origin of Mars