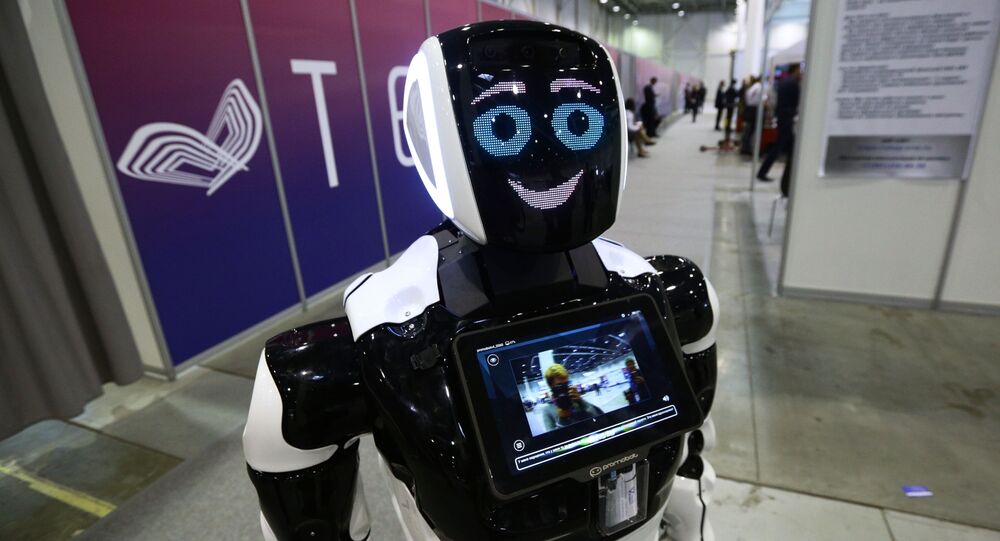 MOSCOW (Sputnik) - A Russian-made robot has been admitted into ranks of the Abu Dhabi police to conduct patrols and video surveillance of employees and visitors as well as to check body temperature of people, Promobot, the manufacturer of customer service robots based in the city of Perm, said.

"This is not the first such [product] development experience for us: our robots are already working in the police of Kazakhstan, Russian multifunctional centres of state and municipal services, mobile operator offices in Turkey, the National Bank of Oman, where they perform similar tasks. In this position, the robot negates the so-called ‘human error:’ it does not get tired, it is never rude to visitors, never late to work and, most importantly, never makes mistakes", the Promobot founder and development director, Oleg Kivokurtsev, said.

© Sputnik / Ilya Pitalev
I Need Your Clothes... and Your Money: Schwarzenegger Sues Russian Firm for Using His Face on Robot
The robot speaks English and Arabic. It has a linguistic database that contains several thousand questions and answers, as well as a facial recognition system. The Promobot robot, in particular, "knows" all police employees, visitors and wanted criminals.

Promobot, a resident of the Skolkovo Foundation, was founded in 2015 and has become the largest manufacturer of autonomous service robots, capable of performing various tasks for humans, in Russia, as well as Northern and Eastern Europe. All the company's products are made and developed in Russia.