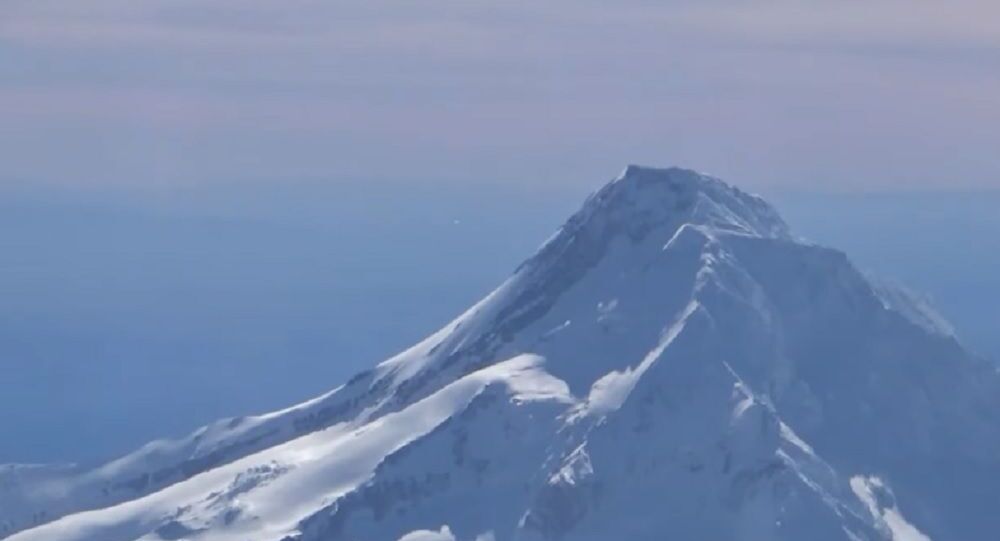 According to prominent UFO enthusiasts, some of the Earth’s high mountains are often used by extraterrestrials for isolation purposes. It sounds reasonable, considering the fact that star-gazers have been watching the sky particularly closely during lockdown, occasionally reporting on all the new ‘alien’ sightings.

An alleged “UFO” spacecraft was caught on camera while entering the Mount Hood volcano, alien hunter Scott C Waring said on his blog, while claiming that “such high mountains and volcanos are being used as entrances to underground alien base”.

The purported UFO sighting took place on 28 February, the conspiracy theorist revealed, when the video’s author was testing the new camera while flying in a plane over the 3.4-kilometre volcano Mount Hood in Oregon. According to Waring, “they didn't even see the UFO until they got home and looked at the video later”, but then claimed that the object was tic-tac-shaped.

The clip of the mysterious phenomenon was published on the enthusiast’s YouTube channel but its authenticity cannot be immediately confirmed.

“The video clearly shows a glowing disk in the distance moving slowly towards the top of Mount Hood and then disappearing”, the self-titled UFO researcher explained.

Waring believes that it is not an uncommon practice for extra-terrestrial spices to use mountain peaks for their bases as they are “rarely visited by humans”.

“Thus aliens have the seclusion and privacy they want”, the UFO hunter concludes.

Just in March, another video allegedly showing alien spacecrafts flying “towards” and “from” Mexico’s Popocatepetl volcano  emerged online, also sparking conspiracy theories about UFOs using the mountain as a hiding spot. Waring has also contributed to these speculations, suggesting that not only was there a 5-6 kilometre “alien base” below the volcano, but perhaps “an entire alien city of many species” were living there.

© CC0
'Shape-Changing UFO' Spotted in Broad Daylight in Colombia
However, most of these “alien base” sightings have been debunked by the specialists so far.

In the meantime, Pentagon has recently released several videos that many believed were documenting the prominent UFO encounters back in 2004 and 2015. While confirming the authenticity of the mysterious footage back in September, the US military stopped short of calling the filmed objects “UFO's” and rather dubbed them “unidentified aerial phenomena”.