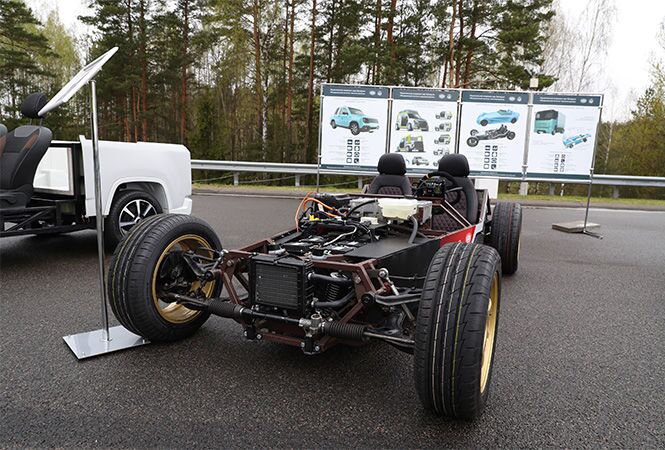 The car was one over a dozen prospective electric vehicles shown to Belarusian President Alexander Lukashenko during a visit to a National Academy of Sciences test track outside Minsk on Tuesday.

Belarusian engineers have built a prototype of a new two-seater electric roadster convertible they say can cruise at speeds of up to 170 km and drive up to 270 km before needing to recharge.

“This vehicle – we genuinely believe we can compete with Tesla. It’s light, it’s maneuverable, we’re using it to carry out critical development of our own engines and engineering solutions. The vehicle is rear-wheel drive, and has a special axle,” an engineer said, speaking to the Belarusian president as he toured the test track facility.

The unnamed roadster has yet to receive a body, although prospective designs on posters behind the vehicle show a possible sleek 1940s-inspired sports car-like design.

Lukashenko was also shown a new electric Zamboni (ice resurfacer machine), ordering the government to buy 25 of the vehicles for the country’s hockey stadiums. “We will order it, but make sure the quality’s good,” the president told developers.

Engineers also invited the president to take a ride aboard a new electricity-powered bus built by MAZ, the large Belarusian automotive manufacturer known throughout Eastern Europe for its quality trucks and buses. Lukashenko instructed the company to build at least 10-12 of the new buses and to deliver them to regional transport authorities by next year.

Other vehicles shown to Lukashenko included electric street sweepers, road construction equipment, electric-powered bicycles, mopeds and even an electricity-powered box truck, along with Belarusian-made electric charging stations for gas station and home use. The display also showed off several drones for the Belarusian military, including the ‘Burevestnik’ (Petrel’), a 350 kg fixed-wing drone undergoing state testing, and a unique drone helicopter called the ‘Eye-Sky’.

After touring the facility, Lukashenko said that he expects Belarus to achieve a major surplus of electric power after the new Astravets nuclear power plant in the country’s northwest goes online later this year.  The power plant, built with Russia’s help, is expected to generate some 2,218 MW of electricity using its twin reactors.