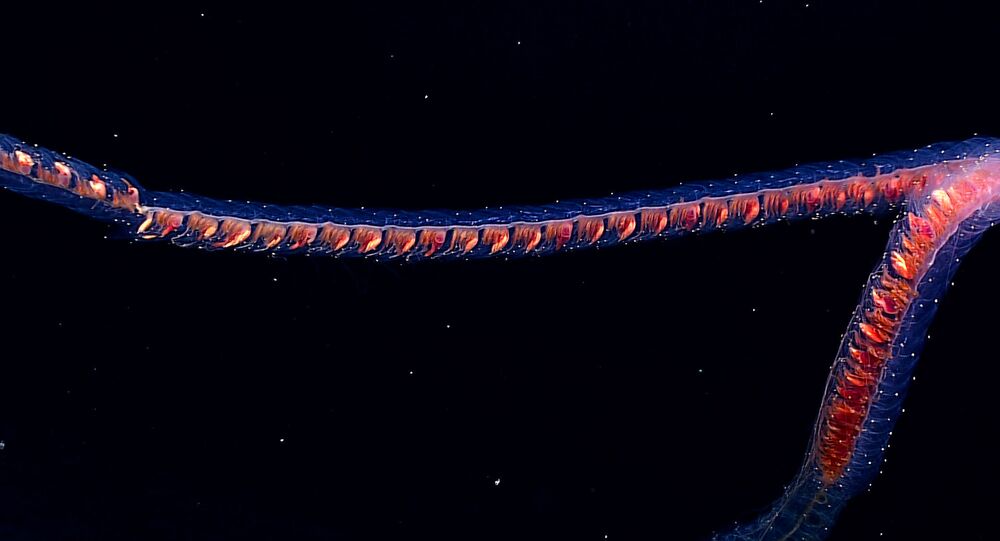 Siphonophores can look like one large individual marine organism to some, but in fact, they are composed of tiny individual bodies making up one huge colony, with each one serving its own digestive, hunting or reproductive purposes.

A giant, strangely ribbon-like looking siphonophore, Apolemia, was spotted near the cost of Australia by a team of international researchers from local institutes, including Western Australia Museum, Schmidt Ocean Institute and Scripps Institution of Oceanography. The Ningaloo Canyons Expedition was exploring the adjoining ocean with a help of sonar equipment and ROVs when they spotted a potentially “largest ever recorded” specimen in a weird UFO-like form.

​“Everyone was blown away when it came into view”, the expedition’s biologists Nerida Wilson and Lisa Kirkendale told ScienceAlert. “There was a lot of excitement. People came pouring into the control room from all over the ship. Siphonophores are commonly seen but this one was both large and unusual-looking”.

In a video, the creature was captured in a “a planar feeding posture”, the biologists explained, which makes it so weirdly “spiral UFO”-looking. The researchers noted that although it was difficult to know the exact measurements of this siphonophore, they estimated only its outer ring to be around 47 metres long, believing that it was “longer than any other animal on the planet”.

© Sputnik / Alexei Danichev
Mysterious Creature Looking Like Giant Cat Seen on Streets of Birmingham (VIDEO)
Siphonophores are marine organisms which resemble giant strings composed of tiny species called zooids that join together in large colonies to act as one giant creature. They usually feed on fish or crustaceans, with each individual in the body acting like an organ serving its own purpose.

It looks like the giant could have been comprised of hundreds or thousands or even millions of zooids, where the nutrients from any captured prey were passed along its large body along a stem shared by all.