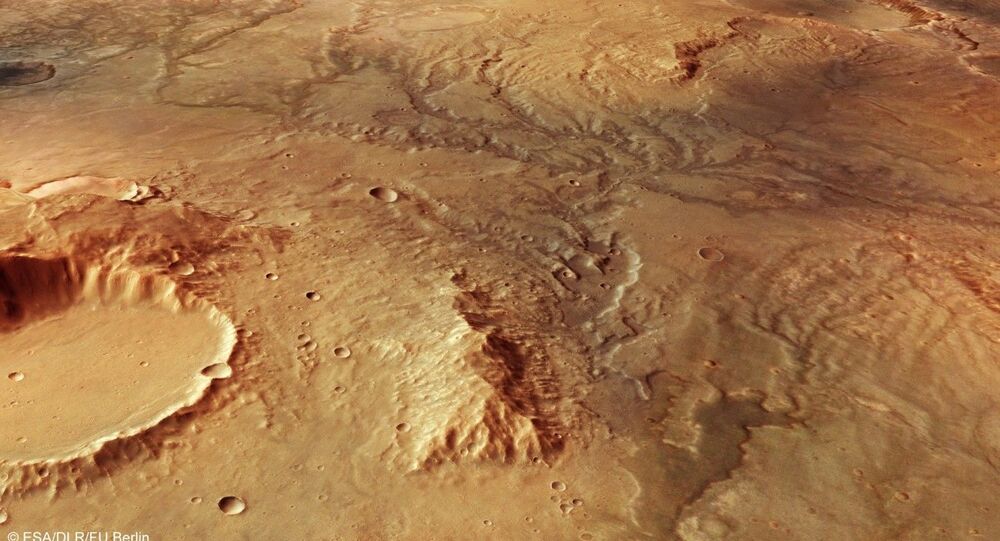 This Bacteria-Nanowire ‘Forest’ May Produce Food, Oxygen for Mars Colonists

One of the primary concerns about the survival of a potential human colony on Mars is how one would produce food and fuel without having to rely on Earth.

Scientists from UC Berkeley and Lawrence Berkeley National Laboratory have developed a hybrid system that could produce vital supplies for Mars colonists.

The system combines the banana-shaped bacteria Sporomusa ovate and a “forest” of nanowires – silicon tubes about a hundred times narrower than a strand of human hair, according to the study published in the journal Joule on Tuesday.

These wires, covered with bacteria, absorb light and generate electrons. They then feed the electrons to the bacteria, which convert carbon dioxide molecules into oxygen and acetate in two separate chambers. Acetate, whose molecules contain two carbon atoms, can serve as building blocks for various organic compounds such as fuels, plastics and drugs.

© Photo : UC Berkeley/Peidong Yang
A device to capture carbon dioxide from the air and convert it to useful organic products. On left is the chamber containing the nanowire/bacteria hybrid that reduces CO2 to form acetate. On the right is the chamber where oxygen is produced.

The device needs only sunlight and water to function: the former is abundant on Mars, and the latter is thought to be frozen in the planet’s polar caps and deep underneath the surface. The entire process somewhat resembles photosynthesis, in which plants produce oxygen along with carbohydrates.

“On Mars, about 96% of the atmosphere is CO2,” the project leader, Professor Peidong Yang, said in a press release. “Basically, all you need is these silicon semiconductor nanowires to take in the solar energy and pass it on to these bugs to do the chemistry for you.”

The scientists claim their biohybrid converts into organic compounds 3.6 percent of incoming sunlight – that’s much better than the 0.4 percent they had five years ago but still below the typical efficiency of 20 percent or more for solar panels.

That improvement was due to the discovery that the bacteria decreased the acidity of the surrounding water while producing acetate – something that made them separate from the nanowires. By keeping the water more acidic, the researchers managed to offset that effect and hang more bacteria onto the nanowires. They are now working to make the hybrid reactor even more efficient.

The device can be used on Earth too, to take in excess carbon dioxide from the atmosphere and turn it into organic compounds, Yang said. His team is developing similar systems that would use sunlight and carbon dioxide to produce sugars and carbohydrates, a potential source of food for Mars colonists.