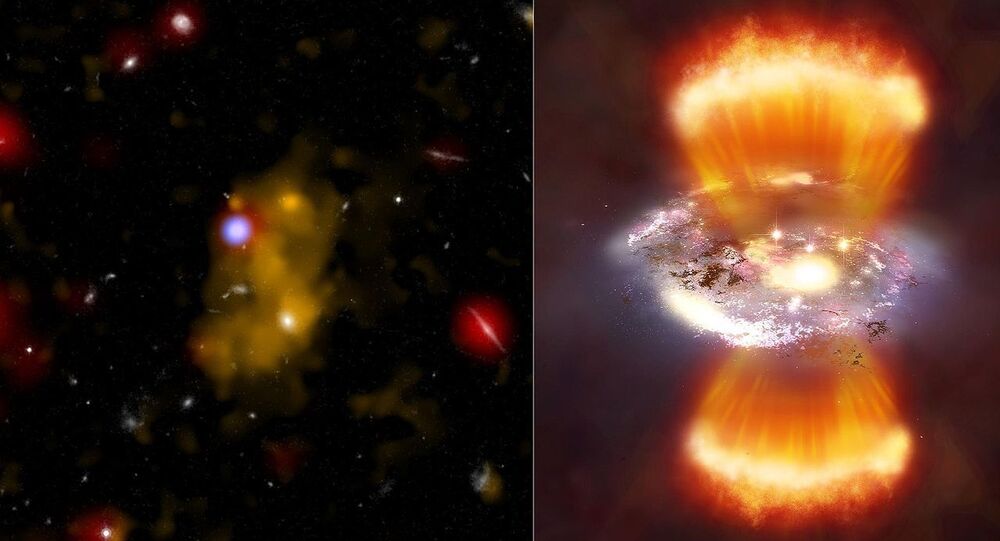 Lyman-alpha blobs are enormous (think several times the size of our galaxy), brightly glowing concentrations of gas in the distant universe. Discovered about two decades ago, they have mystified astronomers ever since, with academics scratching their heads about the power source fueling their energy output, equal to billions of Suns.

A group of astrophysicists from China, the US, Japan and Europe has found key clues regarding the possible source of the energy powering those rare but beautiful and ultra-massive Lyman-alpha blobs (LABs) spewing Lyman-alpha radiation into the surrounding universe.

In a new study published in Nature Astronomy on Monday, the scientists posited that the LAB’s energy most likely comes from their interaction with the dense environment of star-forming galaxies.

Pointing their attention toward LAB-6, a lyman-alpha blob discovered about a decade ago, and situated some 18 billion light years from Earth in the Grus constellation, researchers found evidence that LAB-6’s hydrogen spectral line is “infalling.” That is, the blob’s hydrogen gas seems to fall inward on itself rather than expanding outwards, as observed in other LABs.

This fact, along with evidence that the gas appears to have a low metallic content (with metallic fallout a common feature of exploding stars), led scientists to postulate that the infalling hydrogen gas may have originated in the intergalactic medium –i.e. the space between galaxies, and not in the star-forming galaxy itself.

“If the gas had come from this galaxy, you should see more metals. But this one, there weren’t a lot of metals. This indication is that the gas isn’t contaminated with elements from this star formation,” Dr. Zheng Zheng, an astrophysicist at the University of Utah’s physics and astronomy department and one of the coauthors of the study, explained, speaking to the University of Utah’s press service.

© Photo : Yiping Ao/VLT/Hawk-I/Blanco
Three-color image of the sky around Lyman-alpha blob 6 (LAB-6). In green is the Lyman-alpha emission from LAB-6. LAB-6 is 18.5 billion light years away from us in the direction of constellation Grus, with an extension about half million light years

According to Zheng, the study of LAB-6 has left “a mystery” on scientists’ hands. “We expect there should be infalling gas around star-forming galaxies – they need gas for materials,” Zheng explained. “But this seems to be the only Lyman-alpha blob with gas infalling. Why is this so rare?” he asked.

Lisa Potter, a science writer for University of Utah Communications, explains that “infalling gas can originate several different ways,” including as “the second stage of a galactic fountain – if massive stars die, they explode and push gas outward, which alter falls inward. Another option is a cold stream – there are filaments of hydrogen floating between celestial objects that can be pulled into the center of potential well, creating the infalling gas feature.”

The latter is the most likely explanation of LAB-6’s structure, scientists believe, given the low levels of metallic dust detected among the gases.

However, according to Dr. Yiping Ao, the study’s lead author, and academic at the Chinese Academy of Sciences, “there may still be other possibilities” in explaining LAB-6. “If the galaxy has a super massive black hole in the center, it can emit energetic photons that can travel far enough to produce the emission,” he said.

Largest Explosion in the Universe Spotted by Astronomers