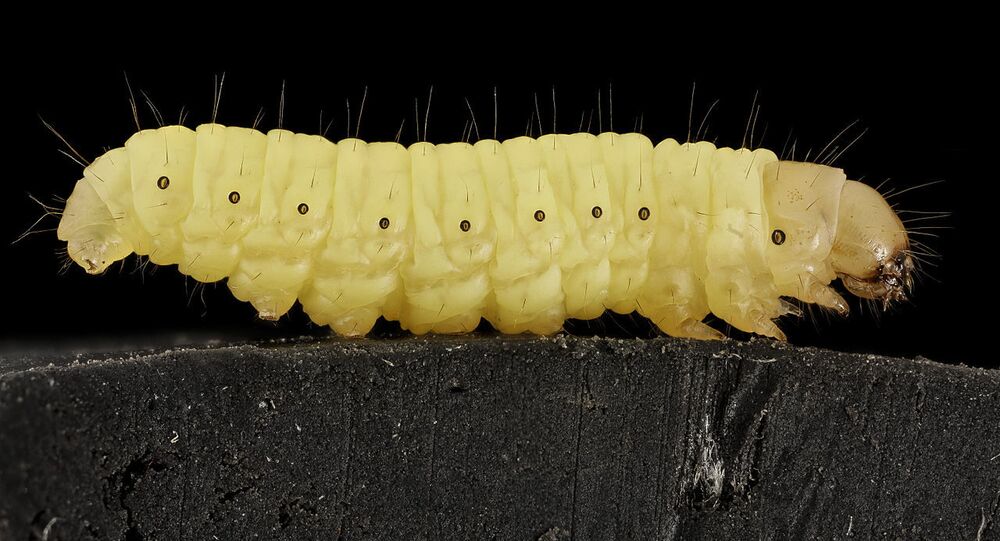 The worms’ ability to munch on polyethylene and poop glycol seems to stem from the peculiar bacteria that dwell in their intestines.

Researchers at Brandon University in Canada have made progress in understanding the nature of a tiny worm that can apparently survive on a diet of plastic, Forbes reports.

As the magazine points out, the tiny creature, known as waxworm, was thrust into the limelight back in 2017 when scientists postulated that this species of worm, which normally lives in beehives and eats wax, could become the answer to at least some aspects of the pollution problems mankind faces nowadays, due to the worm’s ability to eat polyethylene – the type of plastic commonly used in packaging, like plastic bags, and is notoriously slow to biodegrade.

Now, the research team has established that some 60 waxworms were able to eat more than 30 square centimeters of a plastic bag in less than a week, excreting glycol, "a form of alcohol", in the process.

The worms are apparently capable of performing such feats thanks to the peculiar bacteria that dwells in their intestines.

"What our research is trying to figure out is how the waxworm and its gut bacteria work together to allow such an efficient breakdown of plastic. Once we figure this out, we can use the information to design better tools to eliminate plastics from our environment", said Dr. Bryan Cassone, one of the authors of the new study.

He noted, however, that "the plastic pollution crisis is far too big to simply throw these caterpillars at", pointing out that while the worms, which are the larvae of the greater wax moth, are "voracious feeders during the larval stages", the moths themselves don’t eat anything and are only concerned with reproduction.

Now, Dr. Cassone and his colleague and co-author of the study, Dr. Christophe LeMoine, reportedly seek to further examine the relationship between the worms and their intestinal bacteria, in order to better understand the "synergy" between them that "accelerates plastic degradation", as LeMoine put it.